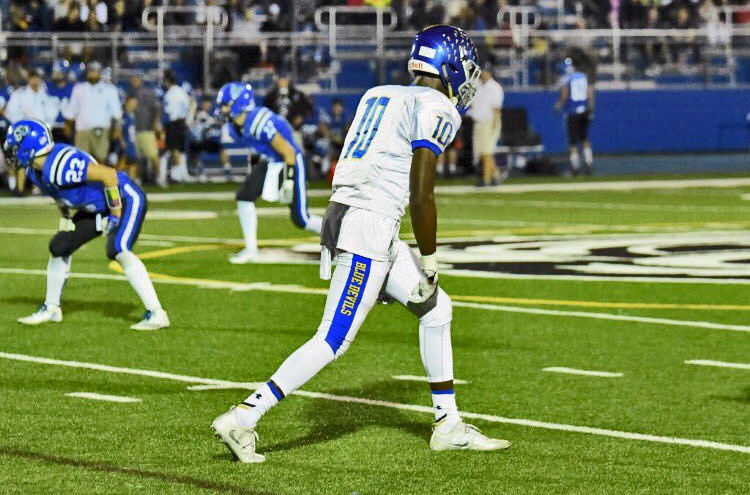 Jones is a composite 4-star prospect according to 247 Sports and comes in ranked #311 overall and #49 at wide receiver.  Like another Illinois native, Jones is built a bit in the mold of a Miles Boykin but is more polished a receiver and blocker at this stage in his career than Boykin was.  Jones’s skills as a blocker are actually on display very early on in his highlight reel below which is highly encouraging.

The commitment of Jones continues what has become one hell of a recruiting coup for Notre Dame last weekend.  The Irish staff took some heat for hosting only a small group of uncommitted prospects for Junior Day, but the weekend has now resulted in four new commitments in less than a week.  Jones joins Kalon Gervin (CB), Derrik Allen (S), and Cole Mabry (OT).

Notre Dame now has 10 commitments for the class of 2018 after the flurry of commitments this past week.  Jones, however, is the first wide receiver in the class of 2018 for Notre Dame and the Irish will be looking to add at least two more with Amon-Ra St. Brown being their top remaining target at the position.  Notre Dame signed just two wide receivers two weeks ago in the class of 2017 – Jafar Armstrong and Michael Young – so it wouldn’t be surprising if the Irish didn’t stop at three receivers in this class if the numbers worked out and they had talented recruits ready to join on board.

Having one of, if not the best quarterbacks in the country on board so early should make for easier wide receiver recruiting this year.  The presence of Phil Jurkovec should help entice elite talent like St. Brown to join Micah Jones in this class’s wide receiving corps.

Notre Dame may not be done adding recruits from last weekend’s Junior Day to the Class of 2018.  Crystal Ball predictions for athlete Braden Lenzy have been coming in for Notre Dame on 247Sports following his visit to campus.  Lenzy is the composite #10 athlete in the country and a 4-star recruit.  Should he join the Irish class, he would join Micah Jones in the wide receiving corps though he does have the ability to play in the defensive backfield as well.

Notre Dame Football Recruiting 2018: Off To A Flying Start

Notre Dame’s Rollercoaster QB Recruiting Ends As Good As They Could Have Hoped, All Things Considered