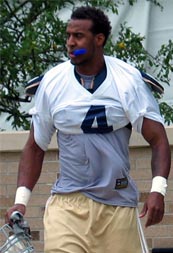 Grant, from Nyack , New Jersey , grew up not too far from the Giants home of the Meadowlands and will attempt to make it on a team with some good running backs on it already. The Giants have Tiki Barber as their starter who is coming off of a career year along with Mike Cloud and Derrick Ward. Add into the mix the fact that the Giants used another draft pick to select Brandon Jacobs from Southern Illinois and it will be a tough task for Grant to find his way on the team.

After coming to Notre Dame as the New Jersey Prep Player of the Year, Grant made an early impact by earning playing time as a freshman. By his sophomore year he became just the 7 th Notre Dame running back to gain 1,000 yards in a season. Unfortunately for Grant, his sophomore year was the peak of his Notre Dame career.

As a junior Grant looked a step slower and lost the job to Julius Jones who had just come back from a season away from the Irish. Jones went on to rush for over 1,000 yards himself in 2003 which reduced Grants role in the offense.

In 2004, Grant was supposed to regain his starting spot, but early injuries opened the door for freshman Darius Walker. In Walker ‘s first game he posted 100 yards on Michigan and Grant was back to splitting carries.

While luck was not totally on Grant’s side, his combine results and workouts didn’t completely wow anyone either. Grant is a solid back with decent speed. If he is serious about the NFL he is going to need to improve his blocking and build his legs. Too many times at Notre Dame Grant went down on the first hit. Grant is also a north-south runner who doesn’t excel in the open field.

In many ways Grant represents a stereotypical Notre Dame football player from the past 10 years or so — a talented player who never reached his potential. Grant reached his peak as a sophomore and never improved from that point. From the 2002 Boston College game on, it appeared Grant was slower and went down easier than he did previously. The anemic offense at Notre Dame didn’t help matters either.

Palmer Signed by ‘Skins
Notre Dame tight end Billy Palmer got signed by the Washington Redskins Wednesday. Palmer finished his Notre Dame career with just 6 catches and 1 touchdown, but has some raw talent. Palmer was at a loaded position while he was at Notre Dame. Tight end was loaded with some talented players during his career which made playing time hard to come by.

Palmer is pretty good blocker however and made a few catches when the ball came his way. Palmer is going to have a tough time making the Redskins roster, but he’s a hard worker and can block.