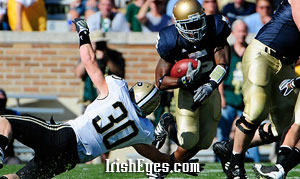 On Thursday I posted “What to Watch For – Purdue at Notre Dame” with five things I thought would decide the Purdue game.  I’m going to make a post like that each week prior to the game and then follow up with another post on Sunday looking back at how I did.  For this first week, it looks like my five points to watch were dead on.  Maybe I shouldn’t make this a weekly feature and just leave this feature on a high note?