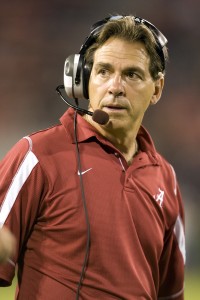 On a little bit of a more positive scheduling note, Tony Barnhart of the Atlanta Journal Constitution reported yesterday that Notre Dame could be looking at scheduling one of the neutral site games in Atlanta.

Gary Stokan, the much traveled president of the Atlanta Sports Council, was here over the weekend talking to Notre Dame athletics director Jack Swarbrick. The subject? Trying to get the globetrotting Fighting Irish to consider Atlanta for one of their neutral site games.

Notre Dame likes to play neutral site games in order to help recruiting. The Irish are playing Navy at Giants Stadium in East Rutherford, N.J. in 2010, Baylor in New Orleans in 2012, and Arizona State in Arlington, Tex., in 2013. Today the school will announce that it will play Army at the new Yankee Stadium in 2010.

Stokan made the pitch for Notre Dame to consider Atlanta for one of these trips. The word I got here is that the Irish might consider it for a chance to play a Georgia Tech or an Alabama.

A matchup with either opponent, especially Alabama, might calm down the masses on the Notre Dame blogs and forums if these talks came to fruition.  The biggest problem in setting up either game will most likely be whether the game would be considered a home game for Notre Dame.  If it was a home game, as the other neutral site games are, then NBC would get the broadcasting rights to such a game.   Will Georgia Tech or Alabama be able to participate in such a game with their conference broadcast deals would be the question.

Considering it looks like Notre Dame is on the verge of adding both Tulsa and TCU to the schedule, I hope Jack Swarbrick does whatever he can to make a game with Alabama happen.  Last year I wrote an article imploring Notre Dame to do whatever it took to set up a game against Alabama after Nick Saban mentioned that he would love to add Notre Dame to the Crimson Tide’s schedule.

A Notre Dame-Alabama game would be one of the biggest games of the college football season and would have the atmosphere of a bowl game regardless of when in the season it was played.  The Irish and Crimson Tide have only played each other 6 times, but that brief history includes some classic games such as the 1973 Sugar Bowl which clinched Ara Parseghian’s second national championship at Notre Dame and the 1975 Orange Bowl.

While I am not of the thinking that Notre Dame needs to schedule top 10 opponents every week, I do see some of the recent schedule additions as boring as a fan.  Adding Alabama would certainly not be boring and would show that Notre Dame is indeed committed to playing a tough regular season schedule.

Notre Dame Football is Headed Back to Ireland in 2023