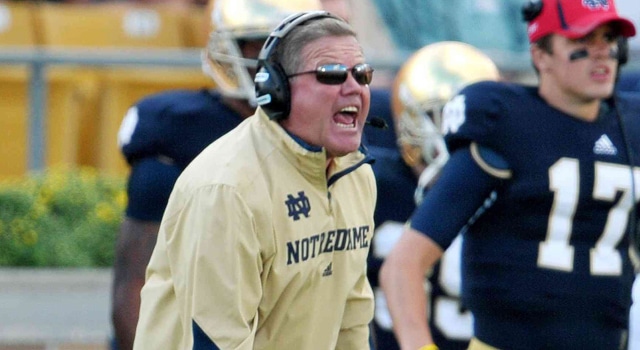 Earlier this week I took a look at some things I liked from the win over Purdue last weekend.  Today I examine some of the things I didn’t like.

Purdue got right back into the game this weekend because of a plethora of missed tackles by the Irish defense – most notably the defensive backs and linebackers.  Young defensive backs like the Irish are using almost exclusively at corner right now are prone to miss tackles, but veteran linebackers should not be missing the number of tackles that the Irish linebacking corps missed on Saturday.

Notre Dame got away with sloppy tackling this past weekend, but if that same sloppy tackling is on display again this weekend, Michigan State’s Le’Veon Bell is going to have a field day running through the Irish defense.  Against a sound offensive team with a back like Bell, Notre Dame is going to have to be much more disciplined if they hope to leave East Lansing with a victory for the first time since 2006.

Late hit and unnecessary roughness penalties are never something you want to see out of your football team – especially when they are being committed by your senior captains.  Both Manti Te’o and Zack Martin collected personal foul penalties on Saturday and while neither ended up particularly costly for the Irish, Notre Dame needs a better example to be set up its senior captains – especially on defense where there are a number of underclassmen contributing.

The personal foul penalties on Te’o and Martin were both pretty out of character as I can’t remember seeing either of them have many such penalties in the past, but it was still something that stood out in a game in which the Irish could have used a little more leadership.

The total lack of a running game

Whether it was design or whether it was because of what the Purdue defense was dictating, Notre Dame completely abandoned the run early on against the Boilermakers and was never able to get it going.  A week after looking like a smashmouth football team, albeit against a weak opponent, Notre Dame couldn’t establish the running game and ended up chucking the ball all around the field.

Considering Brian Kelly said in his pre-game interview that Everett Golson may have to throw the ball 40 times if Purdue was determined to stop the run, the question remains of whether or not Purdue was able to take away the run or if Notre Dame took it away from itself by not even trying to run it.  Whatever the case, Kelly and Chuck Martin need to fix the running game in a hurry.  With a green quarterback still learning the offense, Notre Dame simply has to be able to run the ball – especially with a veteran offensive line and a stable of running backs all capable of making big plays,

This one goes hand in hand with my previous point, but Notre Dame’s offensive line just got thrown around at times by the Purdue defensive and while the Boilermaker front is stout, it is far from the toughest the Irish will face all season.  Against Navy the offensive asserted its will on its opponent like we haven’t seen in a while.  Against Purdue, the line looked lost at times – certainly not like a line featuring four players with starting experience.  Braxston Cave and Mike Golic both had possibly their roughest games in Notre Dame uniforms.

The most concerning aspect of the poor execution by the line were the miss assignments and general look of confusion at times.  While Purdue had their moments of overpowering the Irish line, there were too many other instances where Boilermaker defenders simply sliced through the line untouched and unaccounted for.  Again, the Michigan State defense will make the Irish pay more than Purdue did should Notre Dame have a repeat performance.

I get that Everett Golson is still learning the offense, but the play calling procedure in place now where the offense stands around staring at the sideline waiting for the play to come in while Kelly and Martin survey the defense just isn’t going to fly very long.  Michigan State for instance will eat the Irish offense up if they attempt the same procedure this week.

Kelly is trying to protect his young quarterback and limit his chance for making a mistake, but at some point Kelly is going to need to take the training wheels off and let Golson drive the offense and take the good with the bad.  Golson is playing hesitant at times and the handcuffs he has on him right now are likely playing a role in creating that hesitation.

Until Kelly and Martin clean up the way in which they get the plays in to the offesne, we are going to continue to see wasted time outs and procedure/delay of game penalties that could end up costing Notre Dame wins in the process if/when they find themselves without timeouts at the end of a game or half.