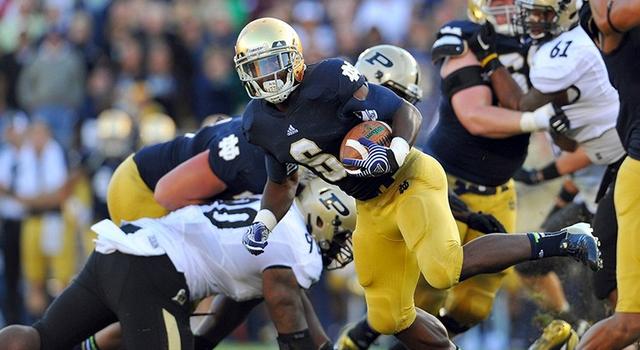 What did we see on Saturday.

A rock-ribbed defense and a heroic late game relief stint delivered by Tommy Rees led the Irish to a nerve-wracking win over gritty Purdue on a weird and frustrating afternoon in South Bend.  While the Irish never trailed, they could not put up enough points to bury the Boilers and secure the win the defense had served up on a gold and black platter.

There were three strands  of adversity for Notre Dame, one in the zone of  foreseeability, and two with jaw-dropping shock value.

Golson looked like a starter in his first start on American soil.  NOTE: the misleading nature of statistics.  If you had not seen the game the 21-29-289, 1 TD, O INTs would satisfy fantasy football lackeys.  But Golson looked like a stranger in a strange land, struggling mightily with the pace, the clock, the play calls from the sideline, and decision making against the Purdue secondary and the Boiler pass rush.  But, again, this was foreseeable, and Kelly had warned us that this might occur sometime.  The fourth quarter fumble was just foul frosting on a devilish cake.

Two HUGE surprises:  The offensive line was inept both in the running game and in dealing with Purdue’s pass rush. 5 sacks and 52 yards rushing were numbers few of us thought possible.  And did anyone, including the coaching staff, see this coming?

Second surprise: Have we ever seen such dysfunctionality from our senior leadership, particularly the four Notre Dame captains?  Two of them, Kapron Lewis-Moore and Tyler Eifert, limped off.  The other two, Teo and Martin had mind-numbingly knucklehead penalties. These are expected from frosh not from the “voices of reason” wearing the captain’s letter.

Once again, the Irish never trailed in the game.  This is, for now, okay, buy you don’t really know what you have until you see a team respond to a deficit. Sorry, lads, ties don’t count.

Newcomers of the match

Davaris Daniels – still gaining confidence (and not yet getting the Floyd calls when he gets mauled in the end zone) but he has all the pieces.  It will come together some day.

Elijah Shumate – a bristling, combative player who has nearly 6 weeks as a cornerback.  He can move, he can hit, and he just might have good ball skills.

The next six Irish foes are most probably, give or take a probation, bowl teams, not a patsy in the bunch.  While the Irish have not yet trailed, that felix culpa should arise soon, testing the Irish come-from behind mettle.

Now stand on your feet and repeat after me: “We won the game.”  Okay, exhale, sit down  and begin the weeping and gnashing of teeth.

How good is Notre Dame?

The virtue of this Irish team is in its loins.  The front seven is the hard, hardened and hearty core of the Irish team.  Fitness buffs contend the body’s core is essential to physical fitness, strength and stamina.  And that holds for football teams. Excellence radiates from a strong core. These warriors on the front seven are, so far, the guts and glue of the Gold and Blue.  Even in Saturday’s discomfort, they held a more than competent Purdue attack to under 300 yards.

For now the front seven is carrying the secondary, but Saturday there were actually glimmers of hope from the back line.  Simply, given the passing attack they were pitted against, they had a better relative performance than against Navy. This is still a vulnerable area, but there may be hope.

Golson is a work in progress.  Saturday, Kelly-and Purdue’s D- tried to put more pressure on him, so the Irish can lead with the passing attack if needed.

He is competent once the ball is snapped. He is terrifying from the type the whistle blows the previous play dead and the ball is snapped on the next play.  The late fumble? That’s on the coaches, not Ev; the ball should have nestled into veteran (Riddick’s) hands.

The offensive line will define this team.  If Saturday was an aberration, and Hiestand and the offensive coaches can quickly correct what went wrong, we will be potent offensively. But we play some fairly decent defenses in five of the next 6 games. After last year’s success, and the size and bios of the five OL, its hard to swallow the bitter pill of Saturday’s OL mess.  But, you know, what ya gonna believe, honey, what I tell you or what you see with your lyin’ eyes?  The jury is out, sequestered until Saturday night.  Midnight verdict in East Lansing.

There is talent and skill at running back, and will be even more so when Cierre Wood returns on Saturday. We are young, but there are things to work with at receiver.

Data is needed for sound judgement.  Hope is not a strategy. Neither is non-empirically based conjecture.

But next week, after the visit to the banks of the Red Cedar River, we will rate the various Irish units.  For this purpose we will divide the units as follows:

OL – the five interior linemen
TES – separately from both the linemen and receivers
WRS – the non TB wideouts
QB – tease (relative to other teams how much depth does ND have at QB?)
RBS – more realistic after Wood’s scheduled return
Front Seven – because the 3-4 so easily morphs into a 4-3, and because we so frequently see the 4-2-5, we’ll rate the front seven as a single organism.
Secondary – we’ll group the safeties and cornerbacks for this rating.

There will be four categories of ratings:

BCS caliber – unit plays at a level worthy of a BCS team (whatever that means)
New Year’s Day bowl level – the isthmus between BCS and lesser bowls
Bowl level – worthy of travel to a bowl
Stay Home! – deserving of Advent sacrifice, not a bowl trip

HINT (if we were to rate the units this week, there would be representation in all four rating categories.)

Next, we rate the Irish opponents.  This is based on HOW they have played so far, and WHO WOULD WIN if they played a number of games on a neutral field. (assume a Monte Carlo simulation.)  It rates the quality of the team, not how difficult they will be for the Irish, a function of location and of who the Irish and the opponent played the previous Saturday.  After we play MSU, we will slot in the Irish at the appropriate level.

Again, next week, we’ll slot the Irish in this ranking, but there need be no premature ejaculation of ranking.

What will we learn on Saturday?

Ah, just in time, the Spartans!  Defending Division champs and winners of a New Year’s Day bowl against the SEC’s Georgia.

For the first time since, well, every day in practice, the Irish offensive line will face a big mobile front seven that cannot be manhandled. Dantonio will use a veteran OL and the stout Le’Veon Bell to control clock, pace and field position.

The return to discipline of Martin and Te’o is not even a question.  They got their madness out of the way, and they will settle down.

Saturday is a great yardstick for the Irish.  If this game is a nail biter for four quarters, the Irish are at a certain level.  But if the Irish are in control as we enter the fourth period, there may be something happening here……