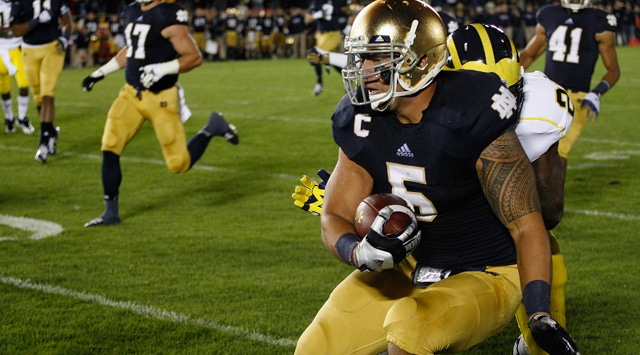 There was a lot to like – and plenty not to like (more on that later) – in Notre Dame’s 13-6 win over Michigan on Saturday night.  This week’s installment of 5 Things I Liked takes a look at what I liked the most from Notre Dame’s 4th win in four tries this season.

The superhuman performance by Manti Te’o

On Friday night an emotional Manti Te’o proved once again why he is such a special member of the Notre Dame community with a heartfelt speech at the pep rally.  On Saturday night he turned in a performance that will be talked about for a long time among Notre Dame fans.  The Hawaiian native is now easily in the conversation of who is the best defensive player in the entire country after a 2 interception, 8 tackle performance while leading the Irish defense as they held a top 20 opponent without a touchdown for back to back weeks.

Te’o’s performance was enough to earned him the Lott Impact Player of the Week for the 2nd consecutive week and has quietly started to get him some hype for the Heisman – hype that is clearly well deserved after he’s collected 3 interceptions, 2 fumble recoveries, and 38 tackles (2 for loss) through four games.

The incredible pass rush without needing to blitz

Notre Dame’s defensive land pretty much manhandled the Michigan offensive line most of the night and didn’t let Denard Robinson get comfortable at any point throughout the game.  The pressure the defensive line generated directly resulted in turnovers as Robinson rarely had time to pass the ball forcing him to throw without being fully set.  All of the defensive linemen played a role in in harassing Robinson allowing Notre Dame to keep linebackers back in space and take away throwing lanes.

After Saturday, Notre Dame has 14 sacks on the season led by Stephon Tuitt’s six .  Tuitt picked up number six on Saturday and now has a sack in every game.  He’s also on pace to shatter Justin Tuck’s single season sack record.  Tuck picked up 13.5 sacks in 2003, but Tuitt is on pace for 18 this season through four games.  It’s not just Tuitt though.  Sheldon Day, Kapron Lewis-Moore, Louis Nix, Tony Springmann, et all are giving Notre Dame the best defensive line we’ve seen in a long time.

I’m not going to lie.  I was terrified about the Irish secondary before Lo Wood was lost for the season so needless to say, I was even more worried once he got injured in fall camp.  The young Irish secondary, however, has played about as well as could have been expected given the lack of experience collectively amongst the group.

Bennett Jackson has picked off three passes already this season in his first four starts of his career after intercepting Denard Robinson on Saturday night while Kei’Varae Russell added his first career pick this weekend.  Fellow freshman Nicky Baratti picked up his first career pick on the ill-advised half back pass by Michigan at the goal line in the victory as well.  All in all, the young secondary turned in a great performance again this week and is growing up very fast.

The coming of age of several freshmen

I already mentioned the play of Russell and Baratti in the defensive backfield and Sheldon Day up front, but it bears repeating.  All three played major roles in Notre Dame’s strong defensive showing Saturday night that limited an offense and a quarterback that has terrorized the Irish defense the last three seasons in check all night.

What makes the contributions of these three so significant is that other than Day, none were really expected to make huge impacts when they signed in February.  Russell came in as a wide receiver/running back and Baratti was seen as possibly a special teams player as a frosh.  Both have stepped up and answered the call when upper classmen have gone down with injury.

Another freshman, Chris Brown, is getting closer and closer to making an impact on offense too.  For the second week in a row Brown got behind a defense and looked like he had a chance for a big play, but was missed again this week.  Pretty soon he’s going to haul one of those in.

The closing out of the game by the Irish offense

Notre Dame’s offense struggled to say the least throughout the game, but in crunch time, when it mattered most, they got a score and closed out a game when they needed to.  After Michigan cut Notre Dame’s lead to 10-3 at the start of the 4th quarter, Tommy Rees led a 11 play, 53 yard field goal drive, that consumed 6:26 of the clock and pushed Notre Dame’s lead back to two scores.

When Michigan cut the lead to a single score a second time in the fourth quarter, Rees and the Irish offense lined up and killed the clock thanks to a clutch throw from Rees to Tyler Efiert on the game’s crucial third down and then a nice run by Theo Riddick to convert the final third down of the game.  Notre Dame’s offense has a long way to go, but unlike years past, the Irish offense has been able to salt away games late in back to back to back weeks with clutch drives and conversions.

Check back later today for the weekly installment of things I didn’t like from this week’s game.

Duranko's Digest: What We Saw Against Michigan

5 Things I Liked: Notre Dame’s Offense Had UNC Defense on Its Heels

5 Things I Liked: Struggling to Find Positives in An Inexplicable Notre Dame Loss

5 Things I Liked: Notre Dame Does A lot Right In Loss to Ohio State