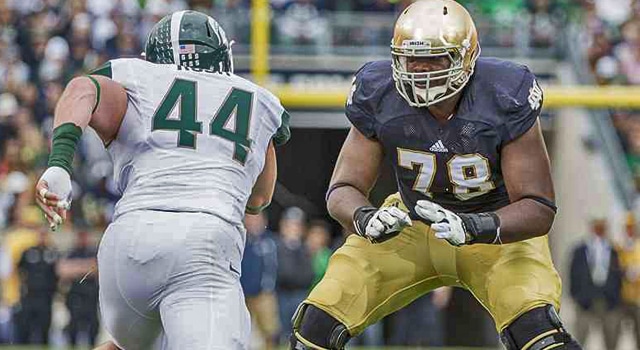 The 2014 NFL Draft has come and gone with Notre Dame being represented better than they have been in a long, long time with eight players drafted and another five from the 2013 roster signing free agent contracts.  With all of that NFL bound talent preparing for their professional careers the obvious question for Notre Dame is how do they replace all of that talent?  We’ll take a look at just how they will one side of the ball at a time.

First up is the offensive side of the ball where the Irish will have to replace players who were #1 on the depth chart at quarterback, running back, left tackle, wide receiver, tight end, and left guard.

Zack Martin was Notre Dame’s highest draft player in 2014 as the #16 overall pick by the Dallas Cowboys. He also left Notre Dame with more career starts on his resume, 52, than any player in the history of Notre Dame.  Despite not garnering much All-American hype, Martin skyrocketed up NFL Draft boards and was off the board exactly midway through the first round.

Replacing Martin will be no small order and in many ways it’s impossible to expect anyone to step in and replace someone who started 52 games and was the anchor of the offensive line the last four years.  Ronnie Stanley already has one season under his belt at right tackle where he started in 2013 and performed well but will have to slide over to the left side where he will be more in the spotlight in 2014.

Stanley is a very talented player who has a lot of potential, but it seems obvious that there will be at least some drop-off at left tackle this year for Notre Dame given just how good Martin has been.

Troy Niklas made the surprising move to leave early for the NFL in January and his decision paid off about as good as he could have hoped.  Niklas wound up being selected #52 overall by the Arizona Cardinals.  That was about as high as any projection had Niklas going and continued Notre Dame’s streak of tight ends being  round two or better draft picks that started with Anthony Fassano (2nd, ’06) and followed with John Carlson (2nd, ’08), Kyle Rudolph 2nd, ’11), and Tyler Eifert (1st, ’13).

Ben Koyack began to emerge as a junior after a disappointing beginning to his career and will now be asked to step in and take over Niklas’s starting job.  There will likely be some drop off here for Notre Dame as Koyack is not nearly the physical specimen that Niklas was and will need to really improve on his blocking in fall camp.  Despite the best season of his career in 2013, Koyack still has just 14 career receptions for 215 yards.  Of his 10 catches in 2013 though, three of them went for touchdowns.

Like Martin, Watt has been a mainstay in the Notre Dame offensive line for years.  Up until the end of his senior season, Watt started every game at left guard right next to Martin since the beginning of the 2011 season.  Watt injured his PCL against Air Force though and missed the Navy game before reinjuring it against Stanford and sitting out the Pinstripe Bowl.  Watt didn’t get quite the attention as Martin, but he did capture the Chargers’ eyes enough to get draft in the 3rd round.

With Watt and Martin both in the NFL, Notre Dame has to replace the entire left side of it’s offensive line.  Steve Elmer received plenty of experience as a true freshman in 2013 due largely to the injuries up front that forced him into action.  The good news for Notre Dame here is that Elmer as all of the looks of a top notch collegiate offensive lineman who very well could follow Martin’s footsteps as a first round pick someday.

It’s never easy to replace a three year starter like Watt, but in Elmer Notre Dame might just have a replacement ready to step in that could eventually be an improvement.  Considering Watt was just a 3rd round NFL Draft pick, that is saying something.

For the life of me, I won’t know why TJ Jones was not drafted before the 6th round.  Jones had great college production despite never being the beneficiary of elite quarterback play, he ran well at the combine, and showed consistent improvement every year he was in college.  This was a historically deep draft at the wide receiver position, but I still think there will be a number of teams – including one I follow closely who reached for an Oregon wide receiver in the 3rd round – kicking themselves for taking some receivers over Jones.

This is one position for Notre Dame, where the hardest part of replacing Jones will be figuring out who the replacement is from a group of highly qualified candidates.  Chris Brown looked great in the Blue Gold game and showed he might not just be a one-route receiver anymore. Will Fuller also has the looks of a complete wide receiver capable of replacing TJ Jones’ big play production.  Assuming Davaris Daniels comes back from his academic exile for the spring semester, I expect either Fuller or Brown to start opposite him.

Notre Dame is stocked at wide receiver unlike they have been in a long time.  While they might not have one wide receiver completely replace Jones’s production, they should have a stable of them ready to power what could be a dangerous vertical passing game.  Also keep an eye on Corey Robinson and Justin Brent here.

QB: Everett Golson steps back into a starting role to replace Tommy Rees

Tommy Rees was not draft by a NFL team over the weekend, but was quick to sign a free agent contract with the Washington Redskins.  Rees’s career, limitations, and production have been discussed adnaseum so there is no need to go too deep into that here, but the bottom line is Notre Dame does have to replace the quarterback who currently sits #2 all-time in career passing touchdowns in Notre Dame history.

Everett Golson returned this spring and despite talk of a quarterback competition between he and Malik Zaire, it would be a surprise if Golson was not the starting quarterback when Rice came to town at the end of August.  Golson will have the weapons around him to lead a high powered offense this fall, but did show some signs of rust in the Blue Gold game.  He will need to spend a lot of time working on his accuracy and timing this off-season with his receivers and utilize every minute of practice this summer, but given his physical attributes and what we saw from him in 2012, it will be very hard to argue that Notre Dame isn’t in a much better position talent wise at quarterback this fall.

RB: Tarean Folston picks up where he left off replacing George Atkinson

George Atkinson surprisingly left Notre Dame following his junior season as he looked up at a logjam at running back on the Notre Dame depth chart but went undrafted this past weekend.  Instead of hearing his name called, Atkinson had to settle for being an undrafted free agent witht he Oakland Raiders similarly to Darius Walker seven years ago.  Some will argue that Atkinson made a bad choice leaving early, but he had already been supplanted on the depth chart and likely would have served a very limited role in 2013.

Tarean Folston (above) is going to have to fight off Greg Bryant for the top spot on the Notre Dame depth chart this spring. (Photo: Tommy LaPorte/Icon SMI)

Atkinson’s role would have been limited because of the emergence of Tarean Folston.  The sophomore to be running back came on strong at the end of the season and has the looks of being Notre Dame’s next go-to running back.  Fellow sophomore Greg Byrant also figures to be in the mix at running back after a strong spring and like the quarterback position, this is an area where Notre Dame is going to be much stronger in 2014 than they were in 2013.

In summary, Notre Dame lost six starters to the NFL, but despite all of those losses, it could be argued that the only position where Notre Dame will be at an obvious disadvantage in 2014 is left tackle simply because of how good Zack Martin was over the last four years.  Tight End is another position where there will also likely be some drop-off although not as much as left tackle.  At left guard, Notre Dame should be able to maintain status quo with Steve Elmer stepping in.  At running back and quarterback, Notre Dame should be upgrading at both positions, and at wide receiver the Irish have enough depth to be able to sustain the loss of a player as talented as TJ Jones.

Next up we’ll take a look at the defensive side of the ball where the picture isn’t quite as rosey for the Irish in terms of replacing NFL bound personnel.

What We Learned from the 2014 NFL Draft