People sure do love to talk about changes to the Notre Dame offense.

However warranted the call for changes are, it is pretty funny that the moment a Notre Dame offensive coordinator commits to running the ball and multiple tight ends, a lot of folks want things to open up. This is especially true given all of the Air Kelly stuff over the past decade. It’s damned if you do, damned if you don’t type stuff.

That being said, Notre Dame does need to become a more dangerous team next year on offense, both in the running game and in the passing game. On plays from scrimmage last season that went over 30 yards, Notre Dame ranked 36th in the country, and this is with a 12 game season, which a good number of teams did not amount to. 36th is not awful, but it’s also not close to elite, which is where they ought to be looking to be headed as a team.

If there is a disagreement as to how Tommy Rees approached the offense last season–the lack of heavy play action or the lack of RPO’s–it’s at least understandable why the team relied heavily on execution and less on scheme. In a season with a lack of preparation, practice time, and player availability, the idea to install a little bit and execute it better than your opponent makes a lot of sense. Naturally, there is a limit as to how far that can take you, as we saw.

This off-season though, with a return to a full spring, a new quarterback, and a re-tooled receiving corps, Tommy Rees has a chance to put the offense together to his likeness. So what is he looking for?

Is Rees Sticking To Power?

Given the makeup of the roster, with the experienced offensive line and the multiple tight ends, the move to 12 and 13 personnel made a lot of sense, almost a no-brainer. And if Rees wanted to do that again in 2021 and beyond, he has the pieces to do it. The top three running backs return, with freshmen backs Audric Estime and Logan Diggs available to make contributions in the fall. While Tommy Tremble moved on at tight end, Michael Mayer, George Takacs, and Kevin Bauman are all available, with Takacs seeing the field last year and Bauman being a hot topic from the beat as an emerging player.

The offensive line is a huge component to this, obviously, and it of course loses a ton, but they do have three players with experience in fold, plus it’s the best recruited position on the roster. If Rees really wants the power running game to be a staple of the offense again, they can find the pieces along the line to make that happen. Plus, incoming quarterback Jack Coan certainly knows how to operate this brand of football, having come from Wisconsin.

Does Rees Want To Open Things Up?

It’d be very easy for Rees to look back on the 2020 season and think to himself, we weren’t dynamic enough in the passing game, from a scheme point of view. After losing top two receivers Javon McKinley and Ben Skowronek, they are also without a comfy cozy big bodied receiver who can win jump balls and matchups just off of sheer size. Very helpful for the power running game, less so for a quick hitting, RPO style attack.

But, it turns out that what Notre Dame can feature at receiver in 2021 lends itself very well to a wide open system. Kevin Austin and Jordan Johnson are big enough, but also agile and explosive. Xavier Watts and Braden Lenzy are powerful and fast, and constantly a threat. Then there is the Avery Davis, Lawrence Keys, and Lorenzo Styles group, who need the ball in their hands to do their most damage. The jet sweep trio.

This group has a lot of questions: health, lack of experience, who plays where. But, the talent and skill is not in question and maximizing their abilities would require Notre Dame to take some tight ends off the field and put some of them on.

How Does Rees Choose His QB?

We hear “build around the talent” a lot, which is always a good idea, but it’s interesting when it comes to a quarterback competition because it’s also about what quarterback can best execute the vision of the offensive coordinator. Do we know what Tommy Rees values? If he wants a dynamic offense, he needs to choose the most dynamic quarterback, whoever that might be. It could also mean bypassing the quarterback with the most experience or the most accurate passer or with the best knowledge of the offense. Will Rees choose his quarterback and cater the offense to his strengths? Or will Rees choose the quarterback who best represents the vision for what he wants the offense to be? Chip Long went with Ian Book in 2018 over Brandon Wimbush because he fit the offense he wanted to run. Wimbush never figured out the RPO game, Long wanted that in the offense, they made the switch at QB.

Do we know if there is any one thing at quarterback Tommy Rees needs?

How I See It

There is a “why not both?” quality to all of this. “Be good at all things”, I say. But it is hard to be EVERYTHING on offense. You do have to emphasize something. As for the tight ends, it certainly seems likely that it will be more advantageous to have a third receiver on the field this season, or a second back, than a second tight end, whereas that wasn’t the case last season. That in itself can change the offense in a lot of ways. If the choice is Takacs or Bauman instead of Davis or Styles, I’d likely want the latter group out there.

And the fact is, Notre Dame can be explosive in the passing game without throwing the ball a ton down field, see our matchup against Alabama where they completed one pass beyond 20 yards (26) and completed 15 passes between 0-5 yards down field, while gashing us for 10 yards per attempt. This is where Jack Coan, minus a huge arm, can be most effective, much like Ian Book was in 2018. And not for nothing, but this would also be a benefit to a new offensive line without a ton of experience.

I expect Notre Dame to feature more dynamic elements to the offense, however those come about, which will be both very interesting and no guarantee of a change to the bottom line in terms of wins and losses. But, at least then we’ll be able to complain about something else. 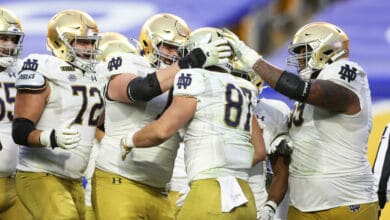