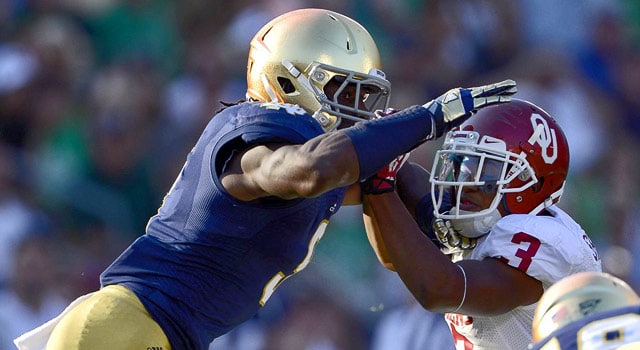 The latest version of the Hollywood blockbuster series the Expendables opened at the box office a couple weeks ago.  While the over the hill all-star cast may play the roles of expendable mercanaries, the list of players we have here are anything but expendable for Notre Dame football in 2014.  These ten players represent a group of starters for the 2014 Fighting Irish who would be the toughest to replace at any point of the season.

10. Kyle Brindza (P/K) – It may seem odd to list a kicker as an indispensable player but Kyle Brindza is a player Notre Dame simply can’t live without in 2014.  With Brindza handling place kicking, punting, and kickoff duties for Notre Dame, he is going to be a very busy man this fall.  In an ideal world Tyler Newsome would have come in and taken the punting duties off Brindza’s plate to let him focus on place kicking, but for now Brindza is going to handle all three jobs.  As is, he is one of the most clutch kickers to play for the Irish in a long time.  By the end of this year there are going to be very few kicking records at Notre Dame that Brindza won’t own.  Add that all up and you have a pretty indispensable player.

9. Ben Koyack (TE) – Notre Dame is loaded with talent at tight end.  The problem is, a lot of that talent is YOUNG.  None of the tight ends behind Koyack on the depth chart have ever caught a pass or even played a snap on the college level.  Durham Smythe could be a breakout player for Notre Dame this year but he will see his first live action this weekend against Rice.  Behind Smythe right now is true freshman Tyler Luatua – a physical specimen but a true freshman none the less.  Should something happen to Koyack, Notre Dame will have a two deep consisting of a “redshirt” freshman and a true freshman.  Behind them are Mike Heuerman  and Nic Weishar – another pair of players whose next snap will be their first.  The talent is there for Notre Dame, but the Irish would be in a big bind if Koyack went down.

8. Chris Brown (WR) – Brown probably would not have been on the list prior to the news breaking about the academic investigation a few weeks ago, but with Daniel’s availability still in doubt, Brown becomes vital for the Notre Dame passing game.  Even before Daniel began being withheld from practice during the investigation, it was Brown who was receiving all of the props from Brian Kelly throughout camp.  Kelly has raved about the leadership Brown displayed throughout the off-season.  As things are right now, losing Brown would be a huge blow even with the young talent Notre Dame has at the outside wide receiver positions from the likes of Corey Robinson, Will Fuller, Justin Brent, and Corey Holmes.  I was already expecting big things from Chris Brown this year, but if Daniels misses significant time, Brown could end up having a huge year for Notre Dame.

7. Ronnie Stanley (LT) – The left tackle is always an important position for any team.   I think it was pretty clear throughout the spring and fall camps that Kelly was hoping sophomore Mike McGlinchey would seize the right tackle position so Steve Elmer could stay at guard.  It doesn’t look like he was able to do that which makes the idea of an offensive line bookended by him and Elmer, who Kelly said was still playing tackle like a guard just a couple weeks ago, scary.  That is what would happen if anything were to happen to Stanley.  While he might not be Zack Martin – hey who is? – Stanley looks like he is ready to take his game to the next level. Amazingly, even though I think the Notre Dame offensive line is going to be one of the strengths of the team, Stanley is the only OL I have on this list.  The main reason for that is the versatility at the other positions.  For instance, I think Nick Martin is going to have a GREAT season, but Notre Dame could shuffle the deck to compensate for his loss better if they had to.  Same at guard where Notre Dame has some talent waiting in the wings if needed.

6. Greg Bryant/Tarean Folston (RB) – I have both Folston and Bryant listed here because and injury to either would be a huge blow for Notre Dame given the depth, or lack there of at running back.  Notre Dame is blessed with talent at the position, but the numbers are not in their favor after failing to bring in a back in this year’s recruiting class.  If either went down Notre Dame would be left with just the other and Cam McDanial as scholarship running backs.  I actually really like Cam as a utility player for the offense but Kelly himself admitted last week that McDaniel isn’t the kind of back that is going to bust long runs frequently.  A backfield depth chart of just Bryant or Folston along with McDaniel would be a really scary thought.  Notre Dame has to hope to stay healthy at this position this year.

5. Jarron Jones (NT) – A year ago at this time no one really knew what Notre Dame had in Jones and to a lesser extent we still don’t really know for sure.  We do know that Jones looked great at times filling in for Louis Nix, but we don’t know if he can play well consistently over the course of a full season.  All signs are that he can though and given the youth Notre Dame has backing up Jones, they need to pray that Jones stays a lot healthier than the jovial Nix did a year ago.  For the Notre Dame defense to have a chance to be anything more than solid this year, Jones and linemate Sheldon Day are going to have to both stay healthy and take big steps forward in their junior seasons.

4. Cody Riggs (CB) – Like Brown, Riggs wouldn’t have been on the list a couple weeks ago.  Russell definitely would have, but with his status in doubt the 5th year senior transfer from Florida has become a player the Notre Dame defense couldn’t live without now.  If Notre Dame didn’t have Riggs around, they would be starting Cole Luke and Devin Butler at corner this weekend – two talented yet very green corners who have zero career starts between them.  Riggs might not be the All-American that Russell had – and still has – the chance to be in 2014, but his presence will help stabilize a secondary that is in need of leadership with Russell’s status in doubt.

3. Sheldon Day (DT) – Sheldon Day has shown some flashes over the last two years of being a big play defensive lineman, but the problem is he hasn’t been able to stay healthy either of his first two seasons with Notre Dame.  That is a problem he will have to fix in order for the Irish defense to show improvement in the first year of Brian VanGorder’s defense.  Notre Dame is already going to be counting more freshmen than you would ideally like to be along the defensive line this year.  If the Irish were to lose Day for any stretch that reliance would only increase and that is not a recipe for great season when you’re facing the toughest schedule in the country.

2. Everett Golson – It’s been a while since Notre Dame has had a legit difference making player at quarterback.  Brian Kelly hasn’t had one during his four seasons at Notre Dame.  He’s gotten some solid play from the position but never game changing performances where the quarterback puts the team on his back and carries them to victory.  Golson has the potential to be that type of player this year.  While Malik Zaire flashed his potential in the spring, should the Irish have to use the sophomore for any extended period of time, it will limit what Notre Dame is capable of doing offensively.  Given the questions on defense, Notre Dame is going to need to score a lot of points this year making Golson rank as highly as he does on our list.

1. Jaylon Smith – Smith, only a sophomore, is already Notre Dame’s best defensive player.  He is going to get obvious comparisons to Manti Te’o due to how recently Te’o turned in his insane 2012 season, but in all honesty, Smith is way ahead of where Te’o was as a sophomore.  It wasn’t until his senior season that the Hawaiian Hitman really blossomed and became a big time playmaker in the Irish defense.  Smith is on the precipices of being there already as a sophomore.  He still has to prove it on the field, but he, more so than any other Irish defense, appears to have the ability to change the momentum of a game right now.  Given the questions that Notre Dame has on the defensive side of the ball, losing Smith for any stretch of time would be devastating to the Irish defense.