With the 2015 season just around the corner, the Irish faithful have reason to be excited for the upcoming season. A strong defense with plenty of experience, a solid offense, and for the first time in a while, actual depth. It’s no secret that this year’s iteration of the Notre Dame Football program has a lot of talented individuals at multiple positions, but optimism aside, so do many of Notre Dame’s opponents on the upcoming 2015 Irish schedule. Taking an early look at a specific team’s yearly schedule and trying the gauge a level of difficulty can be a daunting task, as these situations tend to be fluid, even more so when you target a specific position. Yet, here we are pondering the question “who will be the toughest individuals the Irish defense will face behind center in 2015?”

The hard truth is that 2014 wasn’t exactly kind to the Virginia native, and while his numbers almost mirrored his production from 2013, the Cardinal offense struggled mightily inside the red zone (109th ranked), and ultimately saw Stanford finish the season at 8-5. Why the optimism for 2015? Hogan has eight previous starters returning from last year, and of the Cardinal seven toughest opponents, six of those will be played at Stanford (including Notre Dame). Hogan may not possess the strongest arm in college football, but he is very accurate at all levels of the field, and can hurt the Irish with his mobility.

Consistency is the best way to describe the senior at Navy. A starter for 32 games over the last three seasons, Reynolds can hurt an opposing defense through the air, on the ground, and with experience. The leader of an offense that has been extremely problematic for the Irish defense, Reynolds will lead a Navy attack that has put up an average of just under 28 points (27.6) a game against the Irish, with him as a starter. Not only is Reynolds physically talented, he possesses the true intangibles of a leader, and a confidence that is frustrating for any opponent to witness, but extremely admirable at the same time.

If you allowed a group to mechanically engineer a perfect prototype for Paul Johnson’s option attack, he would look almost identical to Justin Thomas. Reynolds became the full time starter when Vad Lee decided to transfer, and the Tech offense has been extremely solid under his tenure. Thomas helped Tech set nine offensive school records in 2014, while amassing 1719 yards though the air, 1086 on the ground, and a total of 26 touchdowns, with only 11 turnovers(6 ints/5 fum). The Irish will be the first true challenge for Georgia tech in 2015(week 3), and thankfully, for Irish fans at least, it will take place at Notre Dame.

If you forgot, and if you did please let us know how you pulled that off, Kessler is the same man who connected on 32 attempts for 372 yards, and six touchdowns against Notre Dame in 2014, as the Trojans walloped a depleted Irish defense to the tune of 49-14. The one knock on Kessler is that as strong of a 2014 campaign as he had, he did most of his damage against inferior defenses. What Kessler may lack in true arm strength, he more than makes up for in accuracy and anticipation, and the Irish defense will need to be disciplined in their approach to this year’s game. Kessler has all five starting linemen back for 2015, and applying consistent pressure could prove to be a difficult task, but will be required if Notre Dame plans on sending the Trojans back to Southern California with a loss.

The hype train for the sophomore out of Georgia left long ago, and it shows no signs of slowing down anytime soon. In the eight games Watson played in last year (5 as starter) he threw for almost 1500 yards, 14 touchdowns, and only two interceptions. Less we forget that he also ran the ball 63 times for over 200 yards, and five touchdowns. He can hurt you multiple ways on the field, but the question now is, can he repeat that same success in 2015 on a surgically repaired knee, and patchwork type offensive line? These questions should be answered before the Irish make their way to Memorial Stadium on October 3rd, which is one of college football’s most anticipated match-ups of the year.

There will be many factors that will play into whether this list remains the same come the end of the 2015 season, and most of them will be out of control of each individual that we have listed above. One cannot control injury, transfers, academic or unlawful improprieties of teammates, or a multitude of other factors. All of which could easily impede each one these talented quarterback from enjoying the level of success that many feel is a given at this early stage of prognostication. The truth is that whether you are sports journalist, blogger, fan, or highly paid network analyst, none of us can truly predict the future, but it doesn’t make it any less fun to try and do so. 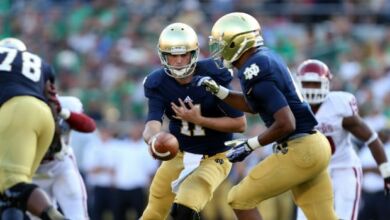