The topic is obviously a very subjective one, and in some corners, a very polarizing one. Brian Kelly has now been with the Notre Dame since 2010 and under his tenure has compiled a record of 51-21, with a national title game appearance. Depending on who you talk to, some consider Kelly as one of the most successful coaches to ever man the helm of the Fighting Irish Football program, while others will whisper that he has actually underachieved during his tenure.

Neither side in the debate lacks a list of ‘facts’ to support their narrative. Regardless of which category you fall under though, the fact remains that the Irish program has been dealt some severe blows this year, and have still found a way to stay extremely relevant in the eyes of the national media.

At the age of 54, Brian Kelly has reached an age in life where there are very surprises left that he hasn’t witnessed before. With that said, without personal confirmation, I assume that this year’s injuries and fallout had to have a certain Déjà vu quality to it.

Starting in the offseason with the dismissal and transfer of Greg Bryant, to the losses of Malik Zaire, Tarean Folston, Alex Bars, Durham Smythe, Jarron Jones, plus others, the Irish Coach has had to deal with significant losses. Injuries are not part of the game and every team has to deal with them, but the loss of your starting quarterback and running back could be devastating to many a program. Instead of making excuses in the media, Kelly circled the wagons and relied upon the all-too-familiar mantra of Notre Dame Football, ‘Next Man In”. A philosophy that Irish fans, staff, and players have embedded in their minds from the past two previous years, has been prevalent and more importantly, successful during the 2015 campaign.

Injury and eligibility issues aside, Brian Kelly has still had to find a way to insert multiple inexperienced players into the offense while facing some difficult defenses along the way. Don’t get me wrong, I’m not claiming the transition and process has been completely smooth and issue free, but there have been far more answers to those questions than in previous years.

There are many adjectives that we could adhere to years past, such as implosion, confusion, and under-performance, just to name a few, but this year Brian Kelly has found a way to keep the proverbial Band-Aid secure up to this point. If you specifically focus on the his work with first year quarterback Deshone Kizer, then what he has accomplished as a head coach this year is even more impressive.

In years past Kelly has been described as being too hard on his quarterbacks, often mentally dismantling them on national television on the sidelines. This year, he seems to have backed off considerably, while still being tough with his young quarterback. It is extremely visible also, that Kelly has given the native of Ohio enough space to be effective behind center, but not ask him to more than he is capable of doing.

Some would argue that Kelly has still struggled as much in 2015 as in previous years with his play calling and in-game decisions, and while there are surely examples of this conjecture littered throughout the current season, he has succeeded much more than he has failed. Some would also claim that it has nothing to do with Kelly, and everything to do with the makeup and talent of Deshone Kizer and C.J. Prosise – two players that Brian Kelly is responsible for in the recruiting process.   I say that while the character of a young man definitely helps, the tutelage they receive is just as important in such an early stage of their career.

As with any controversial subject, there will always be differing opinions on the topic. For myself, I have seen both sides of the argument up close, and honestly have employed the mindset of each at different times.   There is no right or wrong answer when it comes to ones opinion of Brian Kelly’s accomplishments (or lack thereof) while at Notre Dame, but I would suggest that it is hard to argue against what he has drawn out of the 2015 Notre Dame squad. A combination of injuries, imposed youth integration, and a somewhat challenging schedule could have easily been seen as a lethal concoction that could have been viewed as insurmountable, but instead, Notre Dame has persevered – at least for now.

Notre Dame still have some work to do and may need some help if they have their eyes set on a playoff spot, but the fact that the playoffs are still an option at this juncture is proof enough for me that the coaching job of Brian Kelly in 2015 is the best he’s put forth during his time at Notre Dame.

Notre Dame vs Temple Highlights 2015: Kizer to Fuller for the Winner! 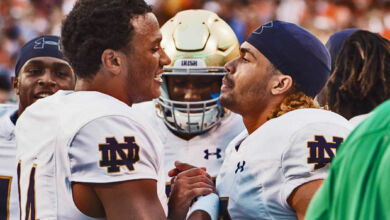 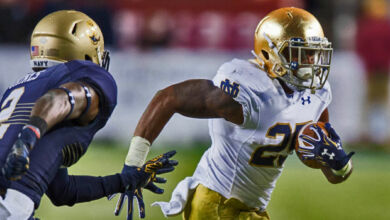 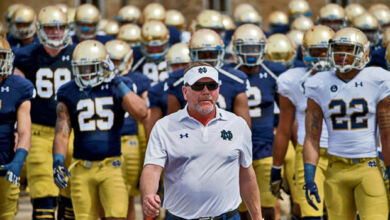