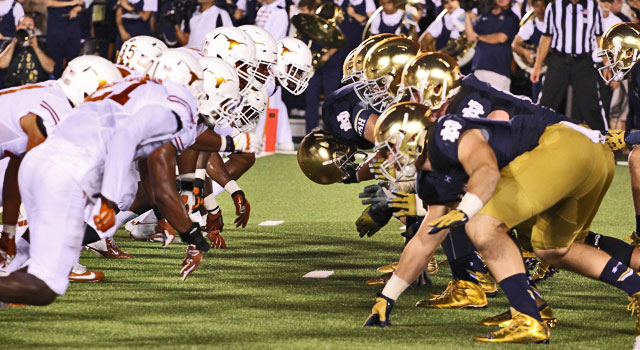 With the 2016 football season a few short weeks away the time has finally come for everyone, whether a fan or writer, to put on record their predictions for the season for future bragging rights.  While injuries can occur – who could have predicted DeShone Kizer would have Notre Dame knocking on the door of a playoff appearance? – and momentum varies throughout the year, a preseason prediction allows you to reflect on your assumptions.  Last year I correctly predicted a 10-2 regular season for Notre Dame but expected the two losses to come at the hands of Georgia Tech and USC rather than Clemson and Stanford.

Notre Dame kicks off its season opener by heading to Austin to face one of the winningest programs in college football history one year after humiliating the Longhorns on national television 38-3.  The loss threw kindling on an already hot seat for head coach Charlie Strong, although Texas regained its composure and finished the 2015 season strong with an enormous upset victory over Oklahoma topped off by defeating No. 12 Baylor 23-17 in the season finale.

This fall is make or break for Strong who went all-in by signing an elite recruiting class that included the top quarterback in Texas, Shane Buechele.  Strong also hired offensive coordinator Sterlin Gilbert, an Art Briles disciple, to kickstart Texas’ inconsistent offense.  A revitalized passing attack would help complement the bulldozers in the backfield in 238-pound running back D’Onta Forman and 255-pounder Chris Warren.

The Longhorns have a rising secondary in young cornerbacks Davante Davis and Holton Hill who recorded strong freshmen seasons in 2015, and sophomore linebacker Malik Jefferson appears to be a Jaylon Smith in the making.

Strong is getting the pieces in place to fix the ailing Longhorn program but he’s likely still a year away.  For perspective, Texas may have signed elite defensive line talent this past February but due to depth will likely be forced to trot true freshman onto the field against Notre Dame’s No. 1 offensive line, according to Pro Football Focus, a move that is not conducive to success.

Texas gives Notre Dame a game with its new-look offensive approach but it’s simply not enough, and Notre Dame sweeps Texas in the home-and-home series.

Notre Dame’s matchup with the Nevada Wolf Pack will be a reunion for head coach Bill Polian, the one-time assistant under then-Notre Dame head coach Charlie Weis.  Since taking over for legend Chris Ault Polian has begun to turn around the Nevada program, posting back-to-back 7-6 records after a 4-8 debut season and is looking to break out in 2016.  Polian hired a new offensive coordinator in Tim Cramsey, a Chip Kelly protégé who oversaw one of the most prolific FCS offenses at Montana State.  There will be no shortage of weapons at Cramsey’s disposal, too, with an offensive line that will all be upperclassmen and a running back in James Butler who rushed for 1,342 yards and 10 touchdowns last season.

For nearly every upside there is a downside, and in Nevada’s case it’s on defense.  The Wolf Pack suffered extreme turnover and will return only one starter from its front seven, a negative development for Polian considering his experienced defense last season still only managed to rank No. 89 in the nation in rush defense, surrendering nearly 200 yards per game on the ground.

This matchup has an element of danger to it.  Coming off a big road win against Texas with an upcoming contest against Michigan State the following week, Nevada has “trap game” fingerprints all over it.  The best way to overcome a trap game is to stick to the basics, which in Notre Dame’s case means leaning on its offensive line and running back depth.  If your strength happens to be your opponent’s biggest weakness, all the better.

Nevada’s offense makes this an uncomfortable game for Irish fans but Notre Dame emerges victorious in a game most will be glad to forget about.

Notre Dame squares off against MSU for the first time since 2013 when head coach Brian Kelly handed Sparty its only blemish en route to a Big Ten Championship and a Rose Bowl victory over Stanford.  Head coach Mark Dantonio’s squad has recorded double digit victories three seasons in a row but faces the daunting task of replacing a score of talent.

One of the biggest losses was Connor Cook, the all-time leader in passing yardage and touchdowns in program history.  A three-way quarterback race has emerged in East Lansing but the expectation is Tyler O’Connor, a pro-style passer, will win the spot.  MSU also lost two of its top receivers in Aaron Burbridge and MacGarrett Kings who accounted for half of Michigan State’s receptions in 2015.  The offensive line will also have to replace standout left tackle Jack Conklin and center Jack Allen.

The biggest challenge for Dantonio, however, will be along the defensive line.  Michigan State’s line was one of the best in the nation last year and Malik McDowell is the sole returning starter, as Shilique Calhoun, Lawrence Thomas and Joel Heath all exhausted eligibility.  Exacerbating the issue is the fact Damon Knox, Craig Evans and Montez Sweat, all expected to fill the vacancies left by last year’s starters, are no longer on the team, forcing Dantonio to rely on four true freshmen and two graduate transfers to fill the gaps.

MSU will always be competitive under the leadership of Dantonio but Sparty’s reunion on the gridiron with Notre Dame couldn’t come at a much worse time for Michigan State.  Losing key players on both sides of the ball will really hurt the Spartans, particularly during the early portions of the season while the team searches for a new identity.

Michigan State’s questionable defensive line against Notre Dame’s offensive line coupled with the fact Brian Kelly is 3-1 all-time against Dantonio – with the lone loss coming on a trick play in overtime when two Notre Dame defenders collided – equals a victory for the Irish.

Michigan State battles but the outcome is never really in doubt.

David Cutcliffe enters his 9th season as Duke’s head coach after an 8-5 record in 2015 and will bring the Blue Devils to South Bend for the first time since 2007 when Notre Dame defeated Duke 28-7 to avoid going winless at home for the first time in 74 years.

Duke possessed a fairly strong offense in 2015, finishing No. 35 nationally in total offense with an average of 439 yards per game.  With lots of returning talent, every indication was Duke would build on last year’s success.  At least until starting quarterback Thomas Sirk tore his Achilles tendon during offseason workouts, the second Achilles injury he has suffered in his collegiate career.  Sick has told the media he is on pace to return for Duke’s season opener but the last time he endured an Achilles injury he missed the entire season.  If Sirk is unable to return the Blue Devils will be forced to rely on backup Parker Boehme’s limited experience or two redshirt freshmen in Daniel Jones and Quentin Harris.

The other side of the ball is similar to nearly all of Notre Dame’s opponents in September, with Duke being forced to replace three starters along the defensive line, although the Blue Devils boast a pair of talented cornerbacks in Breon Borders and DeVon Edwards.

It’s hard to know for certain what to expect in this contest, as much is dependent upon whether or not Sirk plays.  And the risk of a letdown certainly exists after a big victory over Michigan State.  But it’s hard to envision a pathway to victory for a Duke squad that should be outmatched.

Notre Dame exits September undefeated for the fourth time in the Kelly era and the third season in a row.  Next week will preview Notre Dame’s October schedule against Syracuse, North Carolina State, Stanford and Miami.

Notre Dame Football is Headed Back to Ireland in 2023