Neither Braden Lenzy or Lawrence Keys played a down of football for Notre Dame this season as true freshmen.  In any previous year the idea of playing them in a bowl game would have been off the table because it would burn a redshirt season.  This year, however, new rules allow Notre Dame to play one or both of them and still retain that redshirt.  With Notre Dame lacking some speed on offense, speculation has been running wild that the Irish could unveil one of them in the playoffs.  Speculation that Brian Kelly has helped to fuel.

In his press conference last week after the Irish were named to the Playoff field, Brian Kelly more than hinted that he and his staff might look to some players who hadn’t played yet for a spark against Clemson.

“They have been practicing for us, and there are some things we think we need against the competition that we’re playing, and we’ll see how that plays out over the next few weeks. But we think there’s a couple guys who could help us in a few areas, yes,” Kelly said.

At the time he was pressed for specific players, but didn’t mention any by name. “I just think if you look at our offense, there’s some areas that I think from a speed area that I think could help us out,” he added.

This past weekend Kelly didn’t do anything to quiet the speculation that we might see Lenzy or Keys unveiled in the playoffs.

“As we were kind of working through the year, there were other areas that we had to focus on, and that was the offensive line. It wasn’t to develop a third wide receiver,” Kelly stated over the weekend.  “Now, we’re looking for maybe one speed guy that could do some things for us in a limited role. We’ll see if there is someone that can up and do something.”

Now the question is whether or not Kelly and Chip Long actually do try to work in Keys or Lenzy into the offense in some capacity.  It is no secret that one thing the Irish offense is lacking right now is a legit big play, speed receiver.  Miles Boykin is capable of making big plays (see 2017 Citrus Bowl) but it’s not his forte.  He is a big, physical, chain moving receiver.  Chase Claypool has some downfield ability, but isn’t really a “burner”.  Finke is great in the slot and can get open downfield too, but he isn’t taking the top off of a defense.

It does strike me as a bit odd that Kelly is openly talking about potentially using them as much as he is though which leads me to believe that it’s unlikely that either are used much, if at all.  Kelly stands nothing to gain by openly talking about it in the media unless he knows he isn’t going to use them but wants Clemson to spend some time preparing for the possibility.  I mean, why else would a head coach give the opposing team that kind of intel freely?

That isn’t to say it’s off the table though.  Even Kelly mentioned over the weekend that if either were to be used, it would be in a very limited fashion.  “He’s not going to be required to catch six, seven or eight balls. He’s going to do some things to create opportunities where it will be a hero-or-zero play for us.”  So in that regard, think Chris Brown 2012 Oklahoma game.  Brown, then a freshman, knew one route in the playbook and he ran it to perfection to get behind the Sooner defense.

Both Lenzy and Keys came to Notre Dame as dynamic high school wide receivers.  Keys was reportedly further along than Lenzy in training camp so he might have the edge in terms of playing in the Cotton Bowl.  On the other hand, Lenzy is considered to be the real burner of the receiving corps so his top end speed could give him the edge.  Asking either to play against the Clemson defense after not playing a down all season though, is a pretty tall task.

One scenario that could make sense is if Notre Dame struggles to move the ball early and Clemson starts crashing down towards the of line scrimmage, perhaps they send out Lenzy and just have him run a go route to get behind the Tiger defense.  The one area of weakness for Clemson has been against the pass so in theory that could work.

What is possibility more likely is that someone we have already seen play this year in a limited capacity sees a larger role in the vertical passing game.  We saw a glimpse of Michael Young’s big play ability against Northwestern and freshman Kevin Austin had a 35 yarder versus Wake Forest and a 38 yarder versus Navy.  Getting either of them more involved against Clemson could be a new wrinkle that the Tigers won’t have much game tape of.

Michael Young especially just has the looks of a player ready to explode.  He only had 7 receptions this year, but they covered 138 yards.

Another possibility for Notre Dame to turn to to get some more speed on the field is Avery Davis.  The converted quarterback was expected to play a hybrid receiver/running back role this year but after the staff tried to get him involved in the offense early in the season, he was not seen much after the return of Dexter Williams.  Davis is, however, a dynamic athlete who could give the Irish some more playmaking ability.

Wherever Notre Dame turns for some extra offense, it seems pretty clear that Brian Kelly knows that his offense does need something more than what we’ve seen in order for the Irish to take out the Tigers.  Notre Dame’s offense took a big step forward this year with Ian Book running the show, but the defense they are about to face in a few weeks is a whole other beast from what they have dealt with thus far this season.  Notre Dame did face Michigan’s defense, but Ohio State showed everyone that Don Brown’s Wolverine defense was not all that it was cracked up to be. 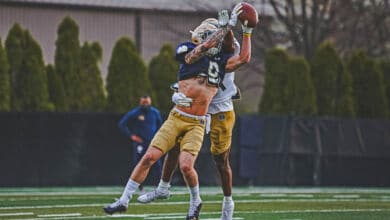 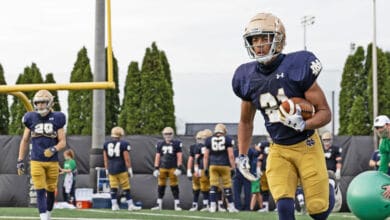