Another one bites the dust. Notre Dame’s options to fill its one “non-conference” game as part of its deal with the ACC for 2020 (I’ll have my late thoughts on that later) have dwindled even more after the SEC announced it will adopt a conference-only schedule for football this year canceling the long-awaited Notre Dame – Arkansas game scheduled for September.

Had the game not been canceled, Notre Dame would have had to choose between Arkansas, Navy, or Western Michigan as its out of conference game although keeping Navy means negotiating another venue change since the stipulations of the agreement with the ACCC state that the one out of conference game must take place in a state with an ACC program. There is no ACC program in Maryland.

This fall’s meeting between the Razorbacks and Fighting Irish was supposed to be the first-ever meeting between the schools. Baring a bowl game matchup in the future, that first meeting will have to wait until 2025 at least. Notre Dame is currently scheduled to play at Arkansas in 2025 as part of a home and home series although how this cancelation impacts that contest, I am unaware right now.

Over the last 24 hours, Notre Dame’s potential 2020 schedule is coming more and more in focus although there is still doubt whether or not there will even be a season. The mess that is Major League Baseball right now is proving how difficult it is to play sports in a pandemic when you don’t create a bubble, like the NBA and NHL have. Now throw in the variable of banking on a bunch of teenagers following the guidelines when grown men with millions of dollars on the line in the MLB aren’t and it’s easy to see why there is still plenty of skepticism that the NCAA can pull off a season. 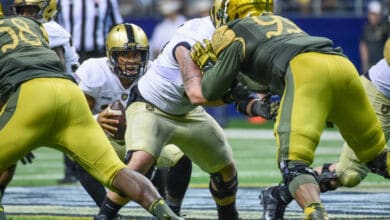 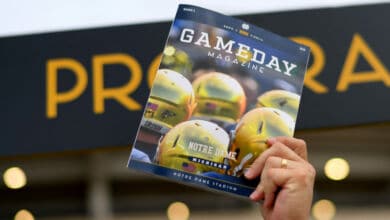