You guys, we did it. We made it to football. Four months ago, I never thought I’d be writing a prediction post at this point, but here we are. We have a real Notre Dame football game to watch. It feels almost surreal, but it is very real. Notre Dame faces Duke in the 2020 season opener as a full member of the ACC. Who would have ever thought that would be the case right now when Notre Dame last played in the Camping World Bowl?

Here’s one of the most ill-informed prediction posts of mine you’ll ever read and you’ll why I’m saying that soon enough.

The Weather Forecast. Rain in a Notre Dame home opener will forever worry me after the 2011 South Florida fiasco. That was almost a decade ago now and it might as well be even longer than that since the program is night and day from where it was then. Still, rain in a home opener is always a little worrisome.

Uncertainty. Perhaps the biggest worry of any Notre Dame fan in a while is the general uncertainty around the program right now. There was no spring practice or Blue & Gold Game. There were no open practices this summer because of the pandemic. All we really know about this team is from what Brian Kelly has said at pressers and from anything that’s intentionally been leaked.

Brian Kelly has had a calm and confidence to him this summer which is positive, but we really don’t know what we have with this team at this point. We know Notre Dame has a veteran QB, OL, and DL. That ought to be good enough right now to beat most teams in the country who have had the same challenges this year. Still, the unknown is always scary.

Rees had future coach written all over him from the time he grabbed a hold of the starting job at Notre Dame when he really had no business being the starting quarterback at a place like Notre Dame talent-wise. Tomorrow we get to see him take the next step in his coaching journey.

RELATED
Despite Departures, Notre Dame D-Line Could be Better in 2020

Notre Dame’s defense being ready. At this point, there really isn’t any situation that I think Clark Lea won’t have Notre Dame ready for. Notre Dame might actually luck into another year of Lea as DC because there probably won’t be a lot of openings this off-season, but there is still the very real possibility that this could be the last home-opener for a rising star like Lea.

That said, Lea will have the Notre Dame defense ready tomorrow and they will be facing a first time starting quarterback. That is a big, big advantage for the Irish.

In any other year I’d be much more confident about a blowout from Notre Dame in this one. I’m not worried that Notre Dame might lose this game at all, but I also think there’ll be some hiccups along the way. Notre Dame’s has a whole new starting wide receiver corps and a retooled backfield and they lost spring practice.

Notre Dame is coming in around a three-touchdown favorite in this one and that feels about right. I think the Irish defense will bottle up Duke for the most part and after a few kinks are worked out, the Irish offense gets going. 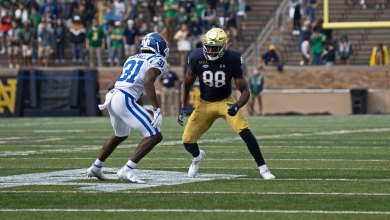