The Notre Dame Fighting Irish improved to 6-0 on Saturday with a 31-13 road victory over the Georgia Tech Yellow Jackets. For the most part, the Irish had few problems during the game, rolling up 426 yards of total offense and collecting 24 first downs on the afternoon.

With four different runners gaining more than 40 yards apiece and eight different receivers catching at least one pass, Notre Dame spread the wealth and avoided the prospect of looking ahead to their pivotal date with Clemson next Saturday night.

Below are some of the keys aspects of the Irish win:

Notre Dame started the game with a 15-play drive that consumed the first 8:44 of the game and culminated with a touchdown pass from Ian Book to Joe Wilkins Jr. After stopping Georgia Tech on six plays, the Irish drove down the field and appeared ready to double their lead.

However, a cold dose of reality for Notre Dame arrived in the form of a fumble that was returned 93 yards for a touchdown and tied the game. The ensuing drive by the Irish saw then start with a five-yard loss before methodically driving down the field on the first of two scores by Kyren Williams, giving them the lead for good.

Another strong performance by the Notre Dame defensive unit saw them allow only points and yards. The Yellow Jackets simply weren’t able to muster much offense either through their running or passing games, though they did manage to be reasonably prolific when it came to converting on third down.

Notre Dame’s pass rush was the spark for the Irish’s first score following intermission. Tech connected on a 39-yard pass play and, after getting flagged for a false start, tried to got to the air again. Except Daelin Hayes‘s sack of Yellow Jackets signal-caller Jeff Sims resulted in a fumble that was recovered by Myron Tagovailoa-Amosa and eventually turned into seven points for the Irish.

For the second time this season, wide receiver Javon McKinley grabbed five passes in a game for the Irish, collecting 93 yards and once again showing that he can be a big-play threat. He had also collected five catches in the win over Florida State on October 10.

Outside of those two contests, McKinkey hasn’t seen many throws come his way in 2020, picking up four in three other games. Yet the fact that he’s had three catches of more than 30 yards in the past two games is evidence that can be the deep threat for Book as the Irish get deeper into the season.

Fly in the Ointment

For the second straight week, the annoying issue of penalties against Notre Dame surfaced with the Irish getting flagged five times for 50 yards. On two occasions, the offensive line was guilty of holding, while a pair of personal fouls also caught officials’ attention. In one instance, an offside call on the Irish was noted.

One indication that the recent side in disciplined play can be seen when comparing the past two weeks to the first four games. Notre Dame was called for penalties 13 times for 110 yards in those other contests, while the numbers for the past two games are 12 penalties for 113 yards. There’s little margin for error in next week’s Clemson game, which will hopefully get the Irish to tidy things up in this area.

While it wasn’t a polished performance on the part of the Notre Dame offensive line, they usually offered Book enough time to complete 18 of 26 passes for 199 yards and one touchdown. In addition, they allowed the entire offense to break the 400-yard threshold for the second game in a row and fifth time this season.

Keeping Book upright and opening holes for Notre Dame runners are necessary components for success with the Irish line. One thing that’s sure is that next week’s challenge will offer this unit quite a test.

The game that the Irish have been zeroed in on for months has them facing the Clemson Tigers. Dabo Swinney’s team has reached the national championship four times in the past five seasons and won two titles. However, the Tigers will be without their top gun, quarterback Trevor Lawrence, who had averaged over 300 yards passing in Clemson’s first six games.

Lawrence tested positive for the coronavirus and missed the Tigers’ Saturday game against Boston College. Without him, freshman quarterback D.J. Uiagalelei struggled during the first half as Clemson trailed 28-10 at the break before coming back for a 34-28 win. The Irish have caught something of a break but still face a formidable challenge.

Overreactions from Notre Dame's Last Test Before Their Final Exam 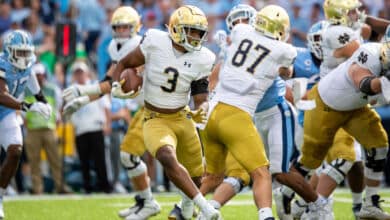 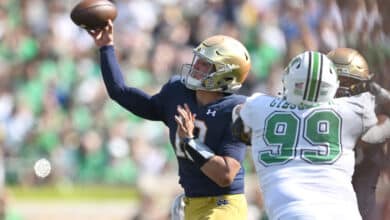 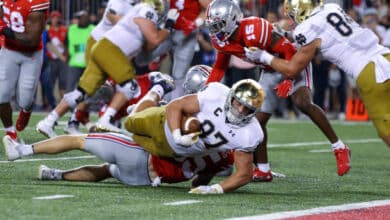