Perhaps the biggest difference between Notre Dame and Alabama in their 2020 College Football Playoff matchup in the Rose Bowl was the talent difference at wide receiver. The Crimson Tide had Heisman Trophy winner DeVonta Smith running wild with another 1st round talent, Jaylen Waddle, injured on the sideline. The Fighting Irish didn’t have nearly the same firepower. It was the same story in 2018 when Clemson’s ridiculous wide receiving corps tore up a temporarily depleted Irish secondary in the Cotton Bowl. In 2021, Notre Dame football’s wide receiving room will have more game-breaking talent but will be woefully short on experience.

Notre Dame is losing its first and third-leading receiver in terms of receiving yards from the 2020 season to the NFL in Javon McKinley and Bennett Skowronek.  Neither was a given to be a leading receiver for the Irish at this time last year.  McKinley was a 5th year senior who hadn’t lived up to his recruiting rankings to date and Skowronek was a graduate-transfer from Northwestern who hadn’t played a snap for the Fighting Irish.

Both McKinley and Skowronek exceeded expectations individually, while the position group as a whole fell very short of expectations. Neither was expected to be leading receivers for the Irish at this time last year. Still, injuries and the continued lack of production from young receivers forced both into prominent, starting roles.

Both had their moments in 2020. McKinley’s three 100+ yard outings in the final four games showed the talent that made him a 4-star recruit five years ago. Still, McKinley’s plays generally came on 50/50 contested catches – not the kind of catch and run plays that have become staples of the offenses in Tuscaloosa, Death Valley, and Columbus.

Skowronek was the big-bodied, possession receiver he was billed to be coming, but he, too generally, wasn’t the kind of receiver that opposing defenses were scheming around. The two had duplicative skillsets rather than complementary, which played a role in Notre Dame’s offensive struggles in the ACC Championship Game and Rose Bowl.

Both will likely be receiving NFL paychecks in 2021, so the problem with the wide receiver position in 2020 wasn’t raw talent. The problem was Notre Dame did not have enough speed at the position. There was speed on the roster last year. It just couldn’t get on the field.

Notre Dame has eight receivers returning in 2021, but only one has played extensively to date.

* Reminder – All eligibility totals remaining include the free year of eligibility from the NCAA for the 2020 season.

Injuries hit the Notre Dame wide receiver room hard in 2020. Kevin Austin’s long-anticipated debut was derailed by a summer injury that required surgery. That injury then flared back up shortly after returning to the field, resulting in Austin catching just a single pass for 18 yards. Austin sat out 2019 with a suspension but terrorized the Irish defense on the scout team. He was expected to start terrorizing opposing defenses in 2020 finally. That never happened, and now Austin enters his seniors season much like McKinley entered 2020 – a highly recruited player who has yet to play up to those rankings.

Likewise, Braden Lenzy’s 2020 campaign was sabotaged by injury – in his case, a balky hamstring that could never get to 100%. A healthy Lenzy flashed game-breaking speed during the 2019 season that justified the #25 jersey he wore at the time. After 454 scrimmage yards and 4 TDs in 2019 as a reserve, he managed just 71 and a single touchdown in 2020.

The Fighting Irish offense in 2020 would have looked much different had Lenzy and Austin both been fully healthy all season. Austin was expected to follow in Chase Claypool‘s footsteps, and Lenzy was expected to be the x-factor whose speed defenses had to worry about constantly. Instead, both primarily played the role of spectators. Instead, they were both spectators for most of the season.

In the absence of Austin and Lenzy, the only other wide receiver who really seized the opportunity for playing time was Avery Davis. The quarterback turned running back turned cornerback turned wide receiver found a home as a receiver in 2020. His numbers weren’t jaw-dropping, but he made two of the biggest plays of the year in the 4th quarter against Clemson in November – a 53-yard catch down the seam to set up the game-tying touchdown that he also hauled in. It looked like he was about to build on that performance for a strong close to the year by following it up with a 2 reception, 70-yard outing against Boston College, but over the final four contests of the year, Davis caught just six passes combined for a mere 45 yards.

We got a glimpse of Joe Wilkins early in the 2020 season, and for the life of me, I can’t figure out why we didn’t see more of him. When he was on the field, he showed good hands and the ability to get open. He also flashed a little bit more outside speed than we saw from either McKinley or Skowronek. For whatever reason, we didn’t see much of him in the second half of the season.

Lawrence Keys had a tough year between being unavailable, presumably for COVID reasons at one point and due to injuries at other times. Like Lenzy, he has the kind of speed this offense could sorely use, but he hasn’t been on the field enough to leverage it.

One of the bigger storylines in the wide receiving corps in 2020 was the lack of playing time for any young wide receivers. Jordan Johnson arrived with a 5-star rating and flashed very early in camp, but he didn’t get a single catch all season. We heard good things about Xavier Watts as well, but he couldn’t sniff the field either. Classmate Jay Brunelle was a non-factor after an off-season injury.

The inability to get freshman wide receivers ready to play has unfortunately been a common occurrence for Notre Dame football that even predates current wide receivers coach Del Alexander. It would be easy to pin the lack of readiness from even talented frosh like Johnson squarely on Alexander’s shoulders, but we’ve seen the same under his predecessors. That is a trend this staff has to reverse.

At the same time, it is hard to look at the Notre Dame football roster and find a position where the Irish have as much depth and as much talent where they have gotten so little production. That is an indictment on Alexander as he faces an off-season where he must replace two starters.

That trend needs to be reversed in a hurry because Notre Dame just signed one of the best wide receiver classes in program history.

When Thomas committed after Notre Dame already had Colzie and Styles committed, I wrote that this is the kind of group that has the ability to help close the talent gap for Notre Dame. The Fighting Irish simply have not signed a trip this talent with such complementary skills in the 20 years this website has been in existence.

Styles comes from a run-first program and isn’t the most polished of the group, but he is the most explosive, and you can’t coach or develop that. Colzie is a prototypical number 1 receiver with size and speed. Thomas isn’t as tall but is more stout and can be a chain mover.

Unlike the receivers in the senior class receiver, this can’t be a group we are still talking about from a potential versus production standpoint as they enter their senior seasons.

In a perfect world, Austin and Lenzy are back to 100%, and Johnson brushes off a frustrating freshman season and comes into spring ball with a mission to win a starting role. However, we do not live in a perfect world, and at this point, Notre Dame can’t just bank on Austin recovering and picking back up where he left off in 2019 as a scout team monster.

Notre Dame has to get more speed on the field at receiver this year. They have plenty of it in the wide receiver room, but to date, it has either been unavailable (injuries/suspension) or has been unable to take advantage of the talent they have (Johnson). That has to change in 2021.

Some of the issues at receiver can be addressed schematically by getting more creative with how the Fighting Irish offense uses motion and creates mismatches, but a lot of it will come down to getting their talented players ready and on the field.

Austin could still very well live up to the billing of being a #1 receiver, but if he doesn’t, Notre Dame has to have Johnson or Watts or one of the freshmen ready to step in. If Lenzy can’t get back to the big-play speed threat he was in 2019, then Notre Dame has to find a way to get Keys or Styles ready to be that threat.

When looking at the sheer numbers and talent that Notre Dame has at wide receiver, there shouldn’t be any excuses in 2021. This has to be a position of strength. If it’s not, something is wrong.

Can Houston Griffith be Notre Dame Football's Next Senior Breakthrough? 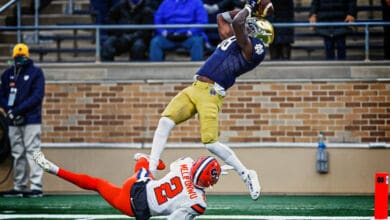