After an unprecedented 2020 college football season, where Notre Dame joined the ACC as a full-time member, the Fighting Irish will return to their independent schedule this fall. The 2021 Notre Dame football schedule features five ACC opponents, several historic rivals, and a few unique matchups. For Brian Kelly and the Irish to get back to the playoffs, they must remain dedicated each week because every opponent already has Notre Dame circled on their calendars.

Notre Dame is set to take on the Florida State Seminoles in a Sunday Night matchup on Labor Day Weekend. Like many games on the schedule, it is uncertain what the pandemic will look like and how large the crowd sizes will be at college football stadiums.

Regardless of the crowd volume, it will be a vital test right out of the gate for a hungry Florida State program that finished last season 3-6 in Mike Norvell’s first season. The Seminoles have a lot of talent, and if they play motivated, it will be a great battle.

The Toledo Rockets, out of the Mid-American Conference, finished the season 4-2. Notre Dame has played several MAC opponents under Coach Kelly, such as Ball State, Bowling Green, Miami of Ohio, and Western Michigan. There is always one game the Irish struggle with each season, like the Ball State Cardinals in 2018.

It will be important to get off to a fast start and not repeat that performance.

After a seven-year hiatus, Notre Dame will once again be facing their only in-state rival, the Purdue Boilermakers. These two programs have met 86 times and will be playing every year from now until the 2028 season. Purdue is notorious for playing Notre Dame tough, and the Boilermakers even dismantled the Ohio State Buckeyes 49 to 20 in 2018.

Thankfully, Rondale Moore is heading to the NFL, but David Bell returns for the Boilermakers and is one of the top wide receivers in the country. Purdue is led by offensive guru Jeff Brohm, who is one of the nation’s best play-callers. Drew Brees may be commentating on this game as well, which would add to the storylines.

Unfortunately, these two programs did not meet at Lambeau Field last season, but they will clash in Chicago for the 2021 campaign. The Badgers finished the year 4-3, with a victory over Wake Forest in their bowl game.

Certainly, the storyline of this matchup will be the quarterback battle. Graham Mertz against the former Wisconsin standout Jack Coan, now potentially the starting quarterback for the Fighting Irish. It should be a great neutral-site clash.

This game will be one of the most anticipated matchups of the entire football season. Notre Dame is coming off a playoff appearance, and the Bearcats were the best non-power five schools a year ago. If Cincinnati wants to be the first non-power five school to make the playoffs, this is a must-win game for them.

There are many ties between these programs with Brian Kelly, Mike Denbrock, and most recently, Marcus Freeman. When this game was scheduled a few years ago, I do not believe anyone could have expected this potential top-10 showdown.

Virginia Tech went 5-6 last season with a 45 to 10 loss against the Clemson Tigers. Since Frank Beamer left, the Hokies have been in the middle of the Atlantic Coast Conference pack. The program also lost longtime defensive coordinator Bud Foster after 24 seasons a few years ago, which has not helped.

Brian Kelly was able to dominate in Blacksburg back in 2018, and it is uncertain how difficult of an environment this will be when the Irish travel to Lane Stadium.

The USC Trojans finished 4-1 with a loss to Oregon in the Pac-12 Championship Game and have been a good team but not a great team under Clay Helton. Kedon Slovis returns as the quarterback for the Trojans and will be one of the country’s top players.

Notre Dame has controlled this series since B came to South Bend, but USC always gives the Irish their best shot. When these two rivals met in South Bend back in 2019, Notre Dame escaped with a 3-point victory.

North Carolina will be one of the greatest challenges on the schedule for Brian Kelly. The Tar Heels are on the rise under Mack Brown and gave Texas A & M all they could handle in the Orange Bowl, albeit without several key players. Sam Howell is one of the Heisman favorites next fall, and Marcus Freeman will look to shut him down like Clark Lea in Chapel Hill last season.

Luckily, North Carolina will be coming into South Bend this time around. The Tar Heels were ranked in the top 15 for most of the 2020 season, and expect them to be highly ranked again.

Notre Dame is on a 3-game winning streak against their longtime rival, the Navy Midshipmen, and the Fighting Irish have won 8 of the last 9 contests. Last season, Ken Niumatalolo and Navy finished 3-7. Expect Navy to have a bounce-back season under Niumatalolo, as they have always done.

Marcus Freeman does have experience against the triple option. Last season, his Bearcats held the Army Black Knights to 10-points, and his defense shutout Navy back in 2018.

The last time these two programs met at Virginia, the game was an instant classic. In 2015, Malik Zaire left the game with an injury, and DeShone Kizer stepped in at quarterback while leading the Irish to a comeback victory in Charlottesville.

Virginia has continued to improve under Head Coach Bronco Mendenhall and even played in the Orange Bowl in 2019. Mendenhall will look for a program defining victory over the Irish this fall.

The Yellow Jackets finished 3-7, including a 31 to 13 loss to Notre Dame. Geoff Collins has had a difficult time transitioning the program from the triple option. This will be the final home game of the 2021 season, and Brian Kelly will look to improve the program to 30-6-1 all-time against the Yellow Jackets.

Brian Kelly heads back to Palo Alto and will attempt to win back-to-back road games at Stanford for the first time since the 2005 and 2007 seasons. Notre Dame was finally able to get a victory back in 2019, and the Cardinal have been struggling as of late under David Shaw.

A few years ago, this was one of the best rivalries in college football, and the Cardinal was always in the hunt for a New Year’s Six game, but the Irish have won two straight and look to continue this recent success.

Brian Kelly is looking for his 3rd playoff appearance. After two college football playoff appearances in the last three seasons, the program should expect nothing less in 2021. This schedule is full of quality opponents but no top-5 teams as of now. The Irish should be favored in about every game this season and do not face potential playoff opponents, such as Clemson and Ohio State, until 2022.

The Fighting Irish need to continue their physical dominance and take advantage of their home atmosphere because their toughest opponents visit South Bend. If Notre Dame and Brian Kelly can accomplish that, they have a shot at making the playoffs yet again.

'21 Outlook: Notre Dame Football Should Continue being Tight End U 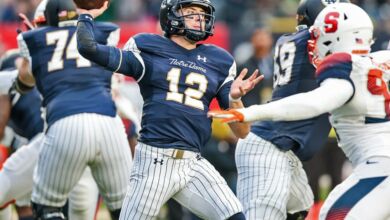