Notre Dame left spring practice in better shape at a few positions that they entered the spring with question marks at.  That doesn’t mean the Irish have answers at those positions, though, and it looks like the coaching staff is trying to find some of those answers through the post-spring graduate-transfer market. Notre Dame has shown some strong interest in both Tulsa cornerback Akayleb Evans and Marshall offensive lineman Cain Madden.  Should either land at Notre Dame, they’d enter fall camp penciled in as starters.

The offensive line was and still is, the biggest question mark for the 2021 Fighting Irish.  Coming out of the spring, however, the line started to at least start to come into focus.  Early enrollee Blake Fisher is looking impossible to keep off the field.  Zeke Correll is locked in at center.  Early enrollee Rocco Spindler surprised many with how advanced he is physically.  As starting five isn’t far from locked in though.  Adding Madden would potentially make things a lot clearer.

Cain Madden was a 2nd team All-American in 2020 for the Marshall Thundering Herd. Should he end up at Notre Dame, he’s going to start the season in the starting lineup.  It’s not a given that he ends up at Notre Dame, though.  Right now, Florida State is the leader in the clubhouse for his services, but most of the predictions for the Seminoles to land Madden came before Notre Dame’s reported interest at the end of last week.  Madden is now reportedly visiting Notre Dame this coming weekend.

Based on what we know right, should Notre Dame add Madden into the mix, we’d likely be looking at an offensive line of Blake Fisher – Cain Madden – Zeke Correll – Josh Lugg – Jarrett Patterson from left to right.  Fisher and Patterson could easily switch as well, but long term, Patterson’s pro future is probably as a right tackle while Fisher is very clearly the left tackle of the future.

Wile the offensive line was the biggest question mark, cornerback was a close second.  Nick McCloud and Shaun Crawford are currently working on making a NFL roster leaving Notre Dame with little experience at corner.  Sophomore Clarence Lewis seems locked into the starting lineup, but outside of him, nothing is set in stone.  Tariq Bracy looked like he was trending towards bouncing back from a rough junior season but isn’t a lock to start on the outside even without any off-season additions.

Akayleb Evans fits the mold of the type of corners Notre Dame has been targeting over the last few years at 6’2”, 188 lbs.  Should he land with the Irish, he projects as an opening day starter opposite Lewis.  That would likely push Bracy inside as the likely starting slot corner.

Evans listed Notre Dame in his final five schools that he is considering for his transfer destination on Sunday.

Notre Dame’s luck graduate-transfers started to turn in recent years after the early transfers didn’t have much of an impact.  In 2020 alone, Bennett Skowronek and Nick McCloud were integral parts of Notre Dame’s perfect regular season and appearance in the College Football Playoffs.  Isaiah Pryor didn’t crack the starting lineup, but he was a special teams stalwart and should reprise that role this year.

If I were to rank which of the two potential transfers is more important for Notre Dame to land, I’d go with Madden given the sheer lack of experience on the offensive line.  Only Patterson, Lugg, and Correll have ever started a collegiate game.  Adding a 2nd team All-American to the mix would significantly raise the expectations of an offense that is replacing a lot of firepower from the 2020 unit that bludgeoned opponents with a run-first approach.

Adding Madden would allow Notre Dame to ease Rocco Spindler into the mix while allowing them to not rely on two true freshmen this fall – even though it seems clear that both will follow in the All-American footsteps of the recent Notre Dame offensive linemen.

Adding Evans would be a big plus as well, but Notre Dame has also had some good luck finding young players capable of filling in at corner in recent years.  When Lewis stepped into the starting lineup last year, it was the first time in recent years a youngster emerged as a force in the Notre Dame secondary.

Notre Dame is already likely to be relying heavily on one graduate transfer, quarterback Jack Coan.  Hopefully, they’ll be adding another to protect him in Madden and another on the other side of the ball in Evans. 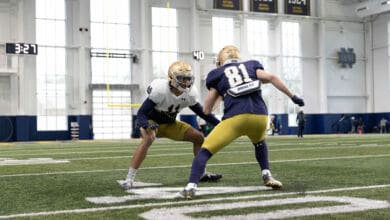 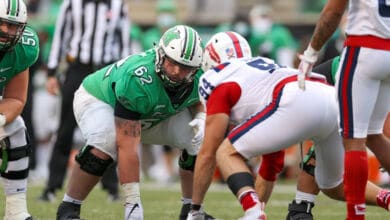 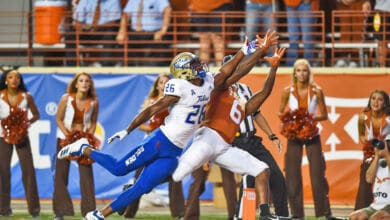 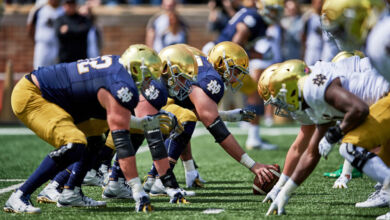