The last week has been an emotional roller coaster for Notre Dame’s Myron Tagovailoa-Amosa. Brian Kelly informed the media early last week that Tagovailoa-Amosa had suddenly and expectedly lost his father. He ended the week being named one of seven captains for the 2021 Fighting Irish – an honor he learned of while back home in Hawaii with his family. Yesterday, he was back on campus and with his teammates on the practice field.

“First and forecast, all praises to the most high,” Tagovailoa-Amosa said to the media yesterday. “It’s a blessing to be back here with my brothers, my coaches, and staff. The love and support that my teammates, my coaches, the Notre Dame community, and staff has shown me, it really means a lot. It puts me in good spirits to have a loving and supporting community behind me, and I’m blessed to be back.”

Tagovailoa-Amosa returned home to Hawaii last week to be with his family as they laid to rest to their father. While he was back home, he learned that he had been voted one of the captains for 2021.

“It’s an honor, first and foremost,” he said of being named a captain. ” It’s a blessing to share with my brothers. Being voted captain is a responsibility I don’t take lightly.”

Because he was back home in Hawaii when the captains were announced, he learned of his captaincy virtually over Zoom. People have become accustomed to Zoom calls over the last 18 months, but this one was a bit unique for Tagovailoa-Amosa. His teammates back in Indiana had a special surprise for him.

“It was very emotional,” he stated. ” The first thing I had seen when I log into Zoom was the leis that everyone was wearing. In my head, I didn’t want to assume it was for my father, but I kind of assumed it was for my father. It really put me in a tearful but joyful state. Understanding the love and support that my brothers have shown me, it puts me in good spirits.”

“Being here for five years now, it’s really developed me into the man I am today.”

Now that Tagovailoa-Amosa is back on campus and in practice, his immediate task at hand is continuing his transition to strong-side defensive end. That task took on some additional meaning to him after the last two weeks.

“Being back on the football field and perfecting my craft – it will be my alone time to focus on myself. I understood my purpose out here was to use my platform to glorify the Lord. That’s something that my dad always preached to me,” he said. “And so, being back here, I’m able to get back in that mode and back in that groove. There’s more motivation behind it now. That’s my mindset right now.”

Tagovailoa-Amosa’s football journey is still in its early stages, with an NFL future a distinct possibility for him. His time at Notre Dame is headed towards its end as a 5th-year senior (though he does have a potential extra year of eligibility left from last year’s COVID season). If this is his last season at Notre Dame, though, it’s abundantly clear that his Notre Dame experience has changed him for the better. “I truly can’t explain the Notre Dame effect. You come here as an individual, and you leave here as a leader and a better person,” he said.

Episode 10: Notre Dame has a QB1, Defending Ian Book from the Slander, and Talking 'Backers 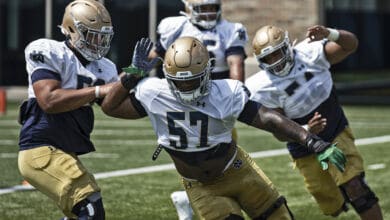