The 2021 Notre Dame football season gets underway on Sunday night, with the Irish traveling to Tallahassee to take on the Florida State Seminoles. Notre Dame has won the last two meetings between these two schools but has had their difficulties when the game is in the Sunshine State. Some major changes on offense for the Irish add a layer of intrigue to this clash.

For Florida State, the hope is that the struggles of recent years are ready to disappear, with Mike Norvell intently focused on erasing last season’s 3-6 mark. Norvell’s forte is on offense, though his main issue last year was on the other side of the ball. To try and address that concern, he’s hoping for a quick fix or some solid improvement through the use of multiple transfers.

Some of the key matchups to watch in this Sunday’s clash include:

The end of the Ian Book era gives way to the arrival of Wisconsin transfer Jack Coan, who sat out last season with the Badgers due to a foot injury. One year before, Coan put up strong numbers and avoided making too many mistakes. He has a core of talented receivers to work with, though their level of production has thus far not matched their potential.

Most of the transfer additions for the Seminoles defense came up front, thanks to last year’s weak pass rush that led to the team allowing 36 points per game. Given the new faces on the offensive line for Notre Dame, Coan’s ability to move the Irish offense may depend on which team’s set of new linemen establish chemistry more quickly.

Some key departures on the Notre Dame defense put the onus on this group to match the regular season efforts of Irish defenders last year. Against teams like the Florida State team they’ll be facing, Notre Dame was largely effective in 2020. However, making impact plays would help Irish coaches get a sense of how they may fare in 2021.

Travis made his first start against the Irish last year and unnerved them during a strong first-half performance. The Seminoles signal-caller is continuing to develop his passing game and already has the mobility to take off. If he struggles, it could mean that UCF transfer McKenzie Milton gets inserted as he seeks to bounce back from a devastating injury.

Notre Dame is hoping that Williams delivers the same type of production he did last year against FSU, when he shredded them for 185 yards and two touchdowns. That effort began inauspiciously with a fumble, but Williams showed the type of explosive speed the Irish need to make another playoff bid this year.

Lundy had a predictably up-and-down freshman season last year, but now has a better grasp of his surroundings and should be more consistent. Stopping Williams will be a major part of his job on Sunday night. Lundy’s athleticism is a key part of his makeup, with a wrestling background helping him grow as a player.

Foskey could serve as a litmus test for the 2021 Notre Dame defense as he takes over the role held last year by Daelin Hayes. To have a true breakout year, he needs to tap into his athletic ability, since his skill in getting into opposing backfields has already been noted. When he’s not battling Scott and Washington, he’ll be dropping back into coverage.

Since Foskey will be seeing time on both sides of the ball looking at what Scott and Washington bring to the table should offer some insight. Both present challenges, with Scott earning postseason accolades for his work on the field in 2020. Washington had his struggles last year after coming off an injury but has gotten quicker and stronger with the benefit of a more normal offseason.

Fisher is a freshman starter on the line, which has generally been uncommon under Brian Kelly. That rapid advancement may indicate he’s another in a long line of Notre Dame linemen in the NFL, but he does have the vital role of protecting Coan’s blindside. His first chance to establish his territory will come on Sunday night.

Johnson is a transfer from Georgia who immediately upgrades what was a weak defensive line for the Seminoles. He knows how to get to the quarterback after five sacks in just seven games last year. He also plays the run well, which puts added pressure on Fisher to at least neutralize him in unfriendly surroundings. If that fails, it could be a long night for Coan.

Notre Dame Football: The Importance of 2021 and the Self-Fulfilling Prophecy 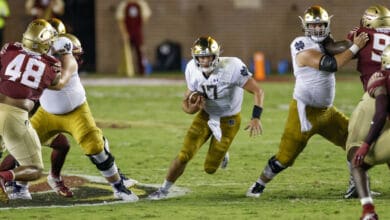