The Notre Dame Fighting Irish celebrated Senior Day on Saturday by easily handling the Georgia Tech Yellow Jackets by a score of 55-0. The margin was hardly a surprise and the game itself was never really in doubt after the Irish jumped out to a 24-0 advantage following the opening quarter. It was 38-0 midway through the second period, with Notre Dame tacking on another score before the break. Those 24 points in the first came after Notre Dame had managed just 35 first-quarter points combined over their first 10 games.

The Irish dominated on both sides of the ball, picking up 514 yards of total offense and allowing Georgia Tech just 224 on the day. In the latter case, Notre Dame’s streak of not giving up a touchdown has reached 12 quarters, with the Irish having outscored their foes in that span by a jaw-dropping 117-9.

Below are some of the notable aspects of the rout:

One of the reasons that Notre Dame was able to jump out their early double-digit lead was the Irish defense’s continuing ability to get pressure on the opposing quarterback. On Georgia Tech’s first play from scrimmage, a blitz by J.D. Bertrand nearly forced a fumble. Later on in the same drive. Yellow Jackets quarterback Jordan Yates threw an ill-advised pass while being hit by Isaiah Foskey, with Jack Kizer scoring on an interception.

On their next drive, a second-down sack by Isaiah Pryor put Tech in a third-and-16 situation that ended up forcing a punt. As if to symbolize the early futility of the Tech protection, the final play of the first quarter was another sack. To cap the days’s scoring, a Foskey sack resulted in a fumble, with Myron Tagovailoa-Amosa rambling 70 yards for the score. Even when they weren’t able to bring down Yates, Irish defenders made Yates pay, including a potent hit from Xavier Watts.

Before being replaced by Tyler Buchner, Notre Dame quarterback Jack Coan racked up 285 yards through the air on 15 of 20 completions, throwing for two touchdowns. There were a number of occasions in which he had plenty of time and had the luxury of connecting with wide-open receivers, including Michael Mayer’s 52-yard touchdown grab.

However, the offensive line did have some early issues that may have caused some Irish fans to have flashbacks to earlier in the year when Coan was sacked too often. On the Irish’s first play from scrimmage, a wide-open Kevin Austin caught a 38-yard pass. That was followed by two sacks in the next three plays, forcing the Irish to settle for a field goal.

Shutting Down the Run

Prior to the game, one of the chief goals for the Notre Dame defense was to keep Georgia Tech running back Jahmyr Gibbs in check, primarily due to his game-breaking speed. The early scoring outburst made an Irish win a foregone conclusion, effectively neutralizing the speedster.

By the time that Notre Dame was leading 31-0, Gibbs had just 22 yards on five carries and ended up finishing with 58 yards on 12 carries for the afternoon. In addition, Gibbs also entered the game tied for the Tech team lead in receptions for 2021 and caught none of Yates’ 13 completions. Without the contributions of Gibbs, any remote hopes of a Yellow Jackets comeback effort died.

Notre Dame held a 45-0 halftime lead before tacking on their final 10 points in the third quarter. That allowed the Irish to let plenty of rarely-used players see the field. Running back Audric Estime saw his first action and finished his appearance with 61 yards on just six carries, including a 21-yard scamper.

Overall, Notre Dame had seven players run the ball and 11 catch it. Two of those to grab a single pass were junior tight end George Takacs and junior wide receiver Matt Salerno, a walk-on who was used as a punter last season. Takacs had just six receptions during his Irish career, while Salerno caught his first-ever pass with Notre Dame.

Next Up for Notre Dame Football

Closing out the regular season next Saturday, Notre Dame heads across the country to resume their rivalry with the Stanford Cardinal. Last year’s matchup was yet another pandemic casualty, with the Irish hoping for the same success they enjoyed during their last visit to Palo Alto in 2019. That 45-24 victory snapped a frustrating five-game road losing streak for the Irish in this series. The Cardinal are headed for a losing record, while the Irish need a win to have any hope of a berth in the college football playoff. Even with a victory, Brian Kelly’s squad will need a great deal of outside help that realistically may not be forthcoming. 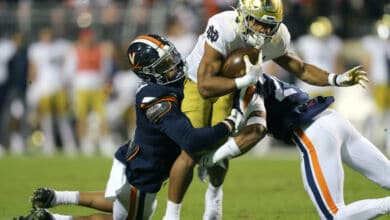 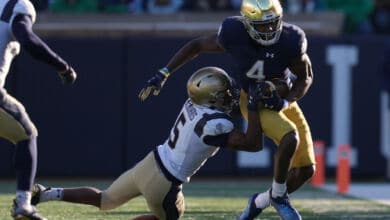 Beyond the Boxscore: Notre Dame Delivers Solid 34-6 Win Over Navy