College Football Playoff chair Gary Barta was on ESPN’s College Gameday on Saturday and confirmed what most media felt would be the case regarding Notre Dame’s evaluation and the coaching situation. While he didn’t rule it out, Barta said he would be very surprised if it impacted the evaluation at all.

“We talked about the Notre Dame change,” Barta said. “The continuity, the quickness. I can tell you that it is still part of our protocol, but based on the conversation last night, I’d be really surprised if it factors in at all in the conversation evaluating Notre Dame.”

Most felt this would be the case when Marcus Freeman was named head coach, and every assistant that Brian Kelly tried to lure with him to LSU promptly turned him down to stay with Notre Dame. The continuity that the Freeman hired, in addition to retaining offensive coordinator Tommy Rees, running backs coach Lance Taylor, defensive line coach Mike Elston, cornerbacks coach Mike Mickens, safety coach Chris O’Leary, and strength and conditioning coach Matt Balis, shouldn’t have impacted Notre Dame chances and Barta essentially confirmed it won’t.

Notre Dame still needs help today, though, in the form of two teams ahead of them losing. All five teams ranked ahead of them play, so the odds of that happening aren’t small.

We won’t know until some time after noon tomorrow where the Irish land, but we’ll have a good idea by 11:00 this evening if there’s a chance it’s the playoffs. The Irish will likely be in the Fiesta Bowl if the favorites win today. On the other hand, if chaos season continues after another chaotic week off the field, Notre Dame could very well be in the playoffs.

What a World: Suddenly National Media is Sympathetic to Notre Dame?

Notre Dame Jumps Back Into Top 10 Following Dismantling of Wisconsin 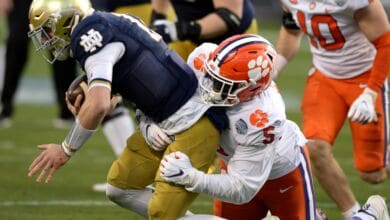