There are a few truths in football that are universally accepted. One of those is that the team that wins in the trenches will likely win on the scoreboard. That may be even more true at a university that carries the moniker OLine U and depends heavily on that position group which it seemingly recruits at a higher level than other positions and at the highest levels of college football.

Heading into this season, Notre Dame had lost four long-time starters from its 2020 offensive line to the NFL. Robert Hainsey, Aaron Banks, Tommy Kraemer, and Liam Eichenberg started and were mainstays on the Notre Dame offensive line for over two years. While it is a daunting task to replace four offensive linemen of that caliber, it is not unreasonable to expect a university that recruits offensive linemen at the level of Notre Dame. Two years to prepare replacements should be an adequate amount of time to simply reload. However, that was not the case this season.

The Notre Dame roster of returning offensive linemen seemingly had no answers for replacing at least two of the four open spots on the offensive line. The left tackle position, arguably the most critical position on the offensive line and which protects the quarterback’s blind side, would ultimately be filled by true freshmen. The right guard position would be filled with Marshall transfer Cain Madden via the transfer portal. Zeke Correll, who had been training to be a center and Jarrett Patterson’s replacement since he arrived on campus, was moved from the center position to left guard. Meanwhile, fellow junior Andrew Kristofic started to train as a center. 5th year Josh Lugg would handle the RT spot.

When mammoth true freshman starting left tackle, Blake Fisher was lost for the regular season in the very first game with an injured knee, a revolving door of left tackle replacements began and would continue for the next four weeks. First Michael Carmody, then Tosh Baker, and then again to Michael Carmody. At the left guard position, it was clear to many early on that Zeke Correll, who performed at a very competent level as a center in 2020 when Patterson went down, including in the College Football Playoff Rose Bowl game against Alabama, was undersized as an offensive guard and he struggled mightily at that position throughout the first five games of the season.

Following the week five loss to 2021 CFP team Cincinnati, changes simply needed to be made. The running game had been completely inept, and the pass protection was amongst the very worst in college football. More specifically, something had to be done with the left side of the offensive line, and following the UC loss, changes were made. True freshman Joe Alt was moved into the LT role in place of Carmody and Baker and Andrew Kristofic would be inserted at the LG position replacing Zeke Correll. Both of these changes would remain permanent for the remainder of the season.

As soon as Alt and Kristofic were inserted into the lineup for the week six contest against Virginia Tech, the difference in production was immediate and pronounced by nearly every metric one might find. PFF pass-blocking grades that averaged 67 before the offensive line personnel changes averaged 78 after the changes were made. An offensive line that was allowing an average of 4.2 sacks per game before the change would allow only 1.6 sacks per game on average after. The protection was enhanced, and the passing game and offense started to take off.

The effect that reconfiguring the left side of the offensive line had on the running game was as dramatic as the pass blocking improvements, if not more. The PFF run-blocking grades that averaged 57.8 during the first five games improved to 77.9 after Alt and Kristofic were inserted on the left side. A running game that averaged a measly 80.8 yards per game and 2.5 yards per carry before the changes would average 203.3 yards per game and 5.5 yards per carry after the changes.

This dramatic elevation in performance led to a second-half surge by the Irish, who would win their last seven games in increasingly dominant fashion. An offense that averaged only 26.6 points per game in the five weeks before the changes would average 36.4 points during the seven-game stretch after the changes were made. During that time, Notre Dame would rise to #5 in the College Football Playoff rankings and earn a New Year’s Six Fiesta Bowl appearance against #9 Oklahoma State.

Handling the Oklahoma State defense will be no small task for the Notre Dame offensive line. Oklahoma State is currently ranked #3 in total defense and #7 in scoring defense. Against the run, Oklahoma State is ranked 4th in the nation in opponent’s yards per attempt and 1st in tackles for loss. Against the pass, Oklahoma State ranks 1st in sacks. If that task wasn’t daunting enough, the Notre Dame offensive line lost RT Josh Lugg, who suffered a meniscus tear in bowl preparations. The 6’6” and 335-pound Fisher, now fully recovered from his week one meniscus tear, will handle the spot for the Fiesta Bowl.

In earning the New Year’s Six Bowl Game, Notre Dame has the opportunity to take a significant step forward as an ascendant program. Notre Dame is currently in the midst of a 27-year drought since their last major bowl victory and has also lost their previous four Fiesta Bowl appearances during that time. After the midseason reconfiguration, the dramatically improved play of the Notre Dame offensive line was vital to earning Notre Dame this opportunity to end both of those streaks. The play of that same offensive line will undoubtedly be key if Notre Dame is to capitalize on it. 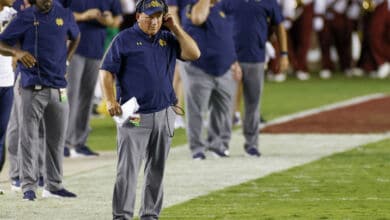 Notre Dame OT Michael Carmody Can Do It All