For the last few months, it’s been assumed that Jarrett Patterson was moving to guard for the 2022 season after starting at center the previous three seasons. Notre Dame head coach Marcus Freeman confirmed the move on Friday at his first press conference of fall camp for 2022.

Patterson missed the spring after surgery for a torn pectoral muscle. While he recovered, Zeke Correll seized the opportunity and his performance this spring likely played a role in Patterson’s move, even if Freeman didn’t mention Correll when asked about Patterson’s move.

“We feel like right now, him (Patterson) playing guard gives our offensive line the best chance to have success,” Freeman said on Friday. “You have to look at that unit as all five, not as individual pieces. J-Patt being at guard, we feel like, gives those five guys up front the best chance to be successful.”

Patterson returned to Notre Dame this year to improve his draft stock even though he could have been a mid-round pick in the 2021 draft. The thought at the time was he returned for a fourth season as Notre Dame’s center.

Spring was not the first time Zeke Correll played center for the Irish. Patterson missed the final four games in 2020 after a late-season foot injury. Correll started two of those games, including the Rose Bowl against Alabama.

Correll’s late-season run in 2020 got him a look at guard in 2021 despite lacking ideal size for a guard. Notre Dame banked on Correll’s experience to trump his lack of size for a guard. It ultimately didn’t work out, and Correll was benched mid-way through the season as part of Notre Dame finding answers along the offensive line.

Only One Spot on Notre Dame Offensive Line Open

With Correll at center and Patteson manning the left guard spot next to starting left tackle Joe Alt, there is only starting position up for grabs along the offensive line – right guard. Josh Lugg, who returned for a 6th season in 2022, sophomore Rocco Spindler, and junior Andrew Kristofic will be fighting for that spot over the next few weeks.

Kristofic was inserted into the starting lineup midway through Notre Dame’s road trip to Virginia Tech. His insertion into the lineup, along with Joe Alt, helped stabilize what was one of the shakiest offensive lines in recent years for Notre Dame. Lugg started 12 games and 20 throughout his career. Spindler is a former top-50 recruit.

Freshman offensive lineman Joey Tanona was not on the official roster that Notre Dame released for fall camp. Freeman confirmed why – Tanona decided to medically retire after an off-season car accident. Tanona will stay on and work towards his degree.

Jarrett Patterson Expected to Play: Notre Dame OL Could be at Full Strength vs. Marshall 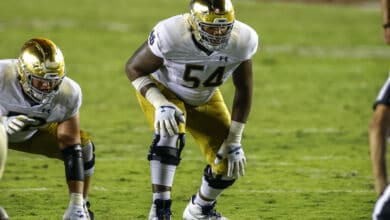