Notre Dame handed Clemson a good old-fashioned butt-whooping on Saturday night, the likes of which neither program has seen in some time. The Tigers are not used to getting blown out, and the Irish have not been the kind of program that blows out top-5 opponents in some time. That happened in Notre Dame’s 35-14 beat down of #4 Clemson.

Marcus Freeman is starting to come into his own

Earlier this year, I wrote on the pod a few times that Freeman didn’t look comfortable at the start of the season. He looked very much like a first-time head coach trying to act the way he thought a head coach should act instead of just being himself. Well, the last few weeks, he’s been himself, from chewing off officials on the road at Syracuse to celebrating with fans on the field last night.

We knew there would be growing pains with Freeman as a head coach because he had never done it before. But seeing him make strides and start to come into his own this quickly after some pretty low points less than a month ago is remarkable progression.

A better win than any Brian Kelly had at Notre Dame

Brian Kelly did not have a better win as the head coach at the University of Notre Dame than the one Marcus Freeman delivered last night. It took Kelly 11 years to beat a top-5 opponent at Notre Dame. Freeman pulled it off in game 9 of his first season as a head coach. The 21-point victory was the largest for Notre Dame over a top-5 opponent since 1995, when the Irish shellacked Keyshawn Johnson and USC 38-10.

The closest win for Kelly to last night’s win over Clemson was 2012 Oklahoma when the Irish went on the road and knocked off #8 Oklahoma, but the difference that night was the game was very close until the 4th quarter when the Irish pulled away. Notre Dame flat-out dominated the #4 team in the country from start to finish last night. That hasn’t happened at Notre Dame in some time.

Last night was just the fourth time in program history that an unranked Notre Dame team beat a top-5 opponent and just the 13th time in program history that the Irish beat a top-5 team by 21 or more. The other coaches to pull off the same feat? Frank Leahy, Terry Brennan, Ara Parseghian, Dan Devine, and Lout Holtz. That’s some damn fine company for Freeman.

Benjamin Morrison is a DUDE

Some fans wondered why Notre Dame kept with Benjamin Morrison after the freshman hit rough patches. However, last night showed the world exactly why the staff moved him into the starting lineup and kept him out there despite some growing pains. Morrison’s two interceptions were the difference in the game.

His first INT set up the offense with a short field, leading to the Irish opening up a 21-0 lead. His second halted the only good Clemson drive (one aided by terrible officiating) and extended the lead to 28-0 when he returned it for a touchdown.

Clemson tried to pick on the true freshman all night long, and he made them pay. Clemson has some dudes at receiver, and none of them could get the beat on Morrison all night. And remember, he’s just a freshman. He’s going to get even better.

Give Brian Mason a massive raise

At this point, I don’t know what else to say about Brian Mason. The man has completely turned around Notre Dame’s special teams after years of mediocrity under the coaching of Brian Polian. The Irish have now blocked SIX punts on the season, including a massive one last night that Prince Kollie returned for a touchdown to give the Irish an early lead and set the crowd roaring.

I am having a hard time thinking of any assistant coach that has come in and immediately made as big of an impact as Mason. It’s akin to the offensive revival that Charlie Weis delivered in 2005 after years of offensive futility under Tyrone Willingham. Mason isn’t the head coach like Weis, but if his unit continues to play like this, it might only be a matter of time before a head coaching job somewhere comes his way.

Running it down their throat

Clemson knew Notre Dame would run the ball most of the time and everyone – myself very much included – assumed that the vaunted Clemson defensive line would be up to the task and the Irish would struggle to run the ball. Instead, all Notre Dame did was run for 263 yards on 47 attempts while passing the ball just 17 times. The Irish averaged 5.6 yards per rush with two backs each eclipsing 100 yards – Logan Diggs with 114 and Audric Estime with 104.

Clemson knew Notre Dame would run it, but they still couldn’t stop it. We have not seen that kind of butt-kicking performance from a Notre Dame offense in a long time. When Notre Dame had one of the best rushing attacks in the country in 2017, defenses started forcing Notre Dame to pass by stacking the box. Clemson tried that, and Notre Dame still had success running the ball.

Notre Dame’s passing game is what it is this year so for the offense to do what it did last night without much of a threat of passing is remarkable.

For the first time this season, Notre Dame got a stop in the redzone. Opposing offenses were perfect in the redzone against Notre Dame while scoring touchdowns more than 80% of the time they got inside the 20. Benjamin Morrison’s pick-6 that gave Notre Dame a 28-0 lead finally stopped a streak Notre Dame desperately wanted to end.

Clemson scored touchdowns on their two other trips into the redzone, so there is still room for improvement, but getting one stop was a relief.

Al Golden had a hell of a game plan

Clemson is not very good offensively, but Al Golden’s game plan had the Tigers looking lost all night. Notre Dame held Clemson scoreless through three quarters and only gave up one touchdown before the final two minutes of the game when the Irish had a 35-7 lead and were content to let the clock tick.

Clemson has not been good on offense this year, but Golden did what good defensive coordinators do to bad offensive teams – he took away what they were good at and shut them down. Golden was also aggressive, and it paid off big time with turnovers and regular pressure on both Clemson quarterbacks. Notre Dame had four sacks on the night, and both Irish turnovers led to Notre Dame touchdowns – one directly. 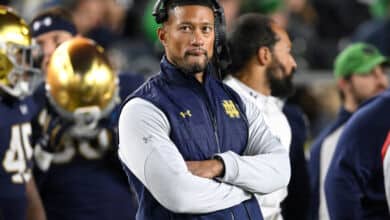 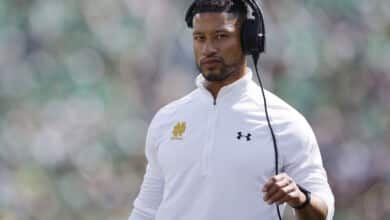 (Not So) Immediate Overreactions: Notre Dame Takes Control of Season Back