Leon Hart was a big player for Notre Dame.  He was actually the BIGGEST Heisman Trophy Winner of all time.

Hart was born in Pittsburgh, and was recruited to Notre Dame from Turtle Creek, PA, just Southeast of Pittsburgh.  Hart’s recruiting had some drama. Leahy had assigned the wonderful Moose Krause to recruit Hart and he had been on him like basmati on rice. Hart had not yet visited Notre Dame.

The normally sturdy Krause was felled by a horrific, near pneumonic bout with a cold, and could barely move.  His wife was providing cough syrup, chicken soup and tender loving care.  The phone in the Krause household rang late one night and it was none other than Leon Hart who had just debarked the train in South Bend. Leon Hart did not dare call Leahy that late at night and called Moose Krause,  his recruiter.  When Moose took the call, his recovery was Lourdes-like. Moose preferred the potential risk of pneumonia to the  certain risk of castigation by Leahy if Hart were abandoned at the train station.  Over the protests of his wife, Moose, rose, washed, dressed and drove to the train station to pick up the precious cargo. Moose was a big guy so he must have enjoyed  seeing a recruit he could “look up to.”

Well, Leon Hart got his ride, and Leahy and Krause got their man.  Hart joined the glittering recruiting class of 1946. He came as a civilian, joining all the returning servicemen and the newly recruited veterans. But Hart fit right in, and had the confidence and competence to hold his own with the grizzled veterans. He played, lettered and caught 5 passes as a frosh.  Hart’s size and grasp of the game grew each year. He was a rare three time First Team All-American.

It’s hard, 70 years later, to comprehend Hart’s massive frame. He was 6’4″ 245 pounds.  20 years after Hart’s arrival the late, great Don “the Hitter” Gmitter started at tight end for the ’66 National Champions at 6’2″ 210 pounds. Hart didn’t so much block defensive players as devour them.

Hart played tight end and defensive right end, and prided himself on being a two-way player, and took further pride in the number of times he played the full sixty minutes. He was tough-minded, gritty which merely leveraged his mass upwards. He was critical of the unlimited substitution and felt that it lessened the college football game.

Football was different back then, the passing game more peripheral and complementary than central.  The offensive portion of Hart’s job description tilted more toward blocking than receiving, but he was an accomplished pass catcher. Hart, as a junior, caught  16 passes for 231 yards and four TDS and then in his Senior year snagged 19 for 257 yards and five tds.

But make no mistake, it was his defensive play and blocking that were even more dispositive in garnering his Heisman win.

Hart was know for yards after the catch.His head coach was smitten with a particular effort of Hart’s in the season ending 14-14 tie with USC in 1948.

The Notre Dame coach Frank Leahy told Collier’s Magazine in 1949 how “eight Southern Cal lads had their arms around Leon at various times after he caught the short pass from Frank Tripucka, but Leon just ran over them and left them for dead.”  “It was the most destructive run I’ve ever seen,” Leahy said.
– NYTimes September 25, 2002

Leon Hart was a defensive force. He did not so much set the edge as he “WAS” the edge. While offenses steered away from him, Hart still wound up with 8 fumble recoveries in his varsity career. But there was much more to Hart. He was an outstanding student, and was a mechanical engineering major, applying his scientific and analytic acumen to be the defensive play caller for the Irish.

Leahy loved to weapoonize his star players, and used Hart tactically as a fullback, giving him 18 carries for 73 yards in ’49, nicely counterpointed by his three fumble recoveries.

Hart was not only the Biggest Heisman trophy winner ever,  he was the only one who could say “My team never lost a game the four years that I played.” 36-0-2 in four years.  Surprisingly, Hart was so dominant as college football’s best player that he won the Heisman voting by an even wider margin than Johnny Lujack did.

He was also the Associated Press Athlete of the year, outpointing Jack Roosevelt Robinson and Sam Snead. He also received the 1949 Maxwell Award. Hart, in 1949, won the national championship, the Heisman trophy and was the #1 pick in the NFL draft. The only other person who accomplished that was, some 60 years later, Cam Newton, student-athlete at Auburn.

In addition to winning three national championships as a collegiate star, Hart was on three NFL title teams with the Lions.

And last, but not least, like Lujack he is honored to be a member of the Polish American Hall of Fame. 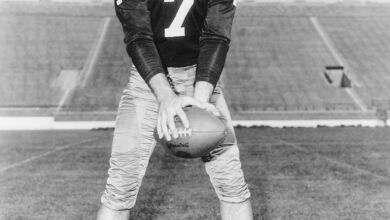 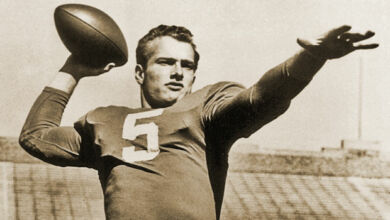 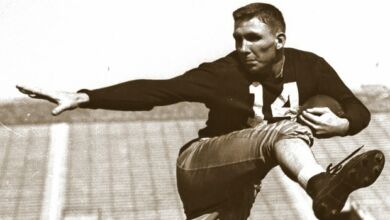 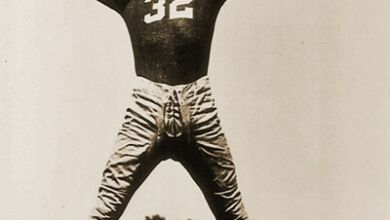