Frank Leahy replaced the beloved Elmer Layden as Irish head coach in 1941. Leahy had, as a schoolboy in Winner, South Dakota, written a letter to Knute Rockne talking about his love for Notre Dame and respect for Coach Rockne, and talked about wanting to play for the Irish. And so it was. Though his career was marred by injuries, Leahy listened and learned, eager for every word and insight and example offered by his beloved Rockne.

Frank Leahy had led Boston College to its greatest heights, logging a 20-2 record as BC head coach, including an unbeaten 11-0 squad that bested Tennessee by 19-13 in the Sugar Bowl. That was General Bob Neyland’s first loss of the 1940 season.

Boston College was not eager to let Leahy go, but that was no earthly force that could keep Leahy away from his beloved Notre Dame (only, as we learn later, the Notre Dame administration could do that).

Leahy was 15-2-3 in his first two seasons. He wanted more in his third year.

Loyal though he was to Knute Rockne, Leahy knew that Rock wanted Notre Dame to win, regardless of the tactics or strategy used. So in preparation for the 1942 season, Leahy replaced Rock’s Box formation with the T formation. (Chicago Bears fans will note that a line of “Bear Down Chicago Bears” is “We ‘ll never forget the way you thrilled the nation with your T-formation.”)

In those days the nincompoopery did not have outlets like blogs and websites like uhnd. So they were reduced to throwing stones at Leahy for the formation change at places like the Linebacker and the local rod and gun clubs. The Linebacker Illuminati were furious that this young lad was replacing Rockne’s beloved box formation. How dare he?

Well, Frank Leahy knew more than the fans. That’s why he was the Notre Dame coach; that was why they paid for tickets. That is why they sat on wooden benches in the stadium; that is why he stood, and prowled “tamquam leo rugiens” like a roaring lion, on the sacred Notre Dame sideline, directing the Irish. Leahy decided; they watched. And that is why Notre Dame went from scoring 189 points with the box to scoring 340 points with the T-formation. Again, Frank Leahy, the Notre Dame coach, knew more than the fans. True then. True 70 years later.

Leahy had established quite a staff. It included the great Moose Krause and Hugh Devore.

Bertelli was the Notre Dame quarterback, and like Notre Dame’s ’29 championship achieved without playing a home game, Bertelli was about to do something that will never be duplicated! His primary ball carrier was the great Creighton Miller. Anchoring the line was the comedic precursor of Louis Nix, Zygmont, “Ziggy” Czarobski. Leahy, Bertelli, Miller and Ziggy would wind up in the College Football Hall of Fame.

The Irish opened at Pittsburgh, coached by Clark Shaughnessy who had installed the T formation for the Bears. The Irish trounced the Panthers, 43-0 in a dominating display.

The Irish then celebrated their Home Opener with a 55-13 rout of Georgia Tech, an 8-3 team that year coached by Bill Alexander.

Next would be the moment of truth. Michigan and Fritz Crisler, waiting with 87,000 partisans in Ann Arbor. Michigan had beaten the Irish in South Bend in ’42, 32-20.

The Irish, with the backfield of Bertelli, Miller, Jim Mello and Julie Rykovich leading the charge, beat Michigan as if they were a maize-and-blue haired stepchild. The final was 35-12, the worst whipping Crisler had ever had as Michigan coach. The fact that it was right there in Ann Arbor merely rubbed stinging Irish salt into Crisler’s wounds. Crisler had never lost by more than 14 points and that was on the road. Crisler reacted by taking steps to ensure that Michigan would no longer play Notre Dame. The next Michigan-Notre Dame game would be in 1978, some 35 years later. It was a mere remarkable series of scheduling conflicts. Michigan was not “chicken.” Poo-tee-weet!

Like Genghis Khan on the prowl, the marauding Irish marched off to their next Big Ten victim, setting up camp in Madison, Wisconsin. The post-Michigan letdown was hardly noticeable, as Notre Dame crushed Wisconsin 50-0.

The next lamb on the sacrificial altar was Illinois. The Fighting Illini went down 47-0, the third Irish shutout of the season.

The next week would not be so easy. Navy, with Annapolis bulging at the seams with young men wanting to serve their country on the Atlantic and Pacific seas, was ranked 3rd in the country and the game would be played in the lakeside city of Cleveland. Notre Dame shellacked the Middies 33-6.

As well as orchestrating the offense, Bertelli had already thrown 10 touchdown passes, on a nifty 25 completions in 36 attempts. But Angelo, you see, had, when walking around campus, stopped often at the East door to Sacred Heart. You know, the one with the arch with three priorities: God, Country, Notre Dame. So, Country was just after God and Angelo went off to honor his Marine Corps commitment with four games left in the season.

With Navy’s loss, Army moved up to #3 in the nation, and, voila, they were the next Fighting Irish opponent.

While humming the Marine Corps Hymn, Leahy gazed over the human wealth on his practice field and stopped his gaze at a young kid from Connellsville, Pennsylvania. And so that “next man” went in and John Lujack threw for two touchdowns, ran for another and intercepted a pass to key a shockingly easy 26-0 shutout of the Cadets.

That’s right, Bertelli left after six games, went to the Marines Corp, was replaced by a guy who would eventually win a Heisman, and ol’ Angel received the ’43 Heisman. Heisman tradition that!

The Irish dispatched Northwestern in Evanston, 25-6, then squeaked by Iowa Pre-Flight, 14-13.

The Irish lost their last game, 19-14, but to Great Lakes Naval Training Station. And it was a last minute play that let Great Lakes slip past the Irish. Those guys had frogmen, seals, subs, torpedos and cruisers. Talk about the football arms race!

The Irish beat seven teams that were ranked in the final AP top 13. They had scored 340 points and held the opposition to 69. The Irish easily won the Associated Press Poll and were national champions.. Bertelli beat out Otto Graham of Northwestern for the Heisman.

THERE IS LIFE AFTER ROCKNE

It had been 13 years since Rock’s third national title in 1930, the season before he died in that fateful Kansas storm.

Leahy had done it. Notre Dame was not a one-trick coaching pony. Frank Leahy’s dominant 1943 team, particularly shocking maize and blue-blood Michigan, had shown that the Irish were a force to be reckoned with.

Patriot that he was, Frank Leahy, like Bertelli, understood the God, Country, Notre Dame mandate on the Sacred Heart door. So, Frank Leahy joined the Navy and went off to sea, to fight the Huns. What he did in his spare time, however is a story for another day. 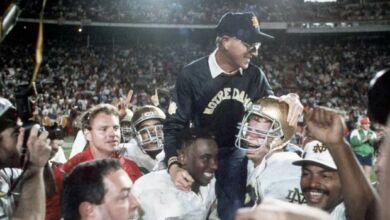 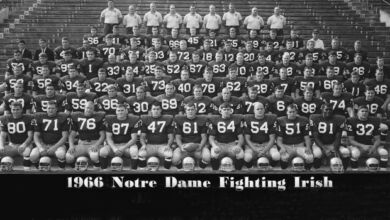