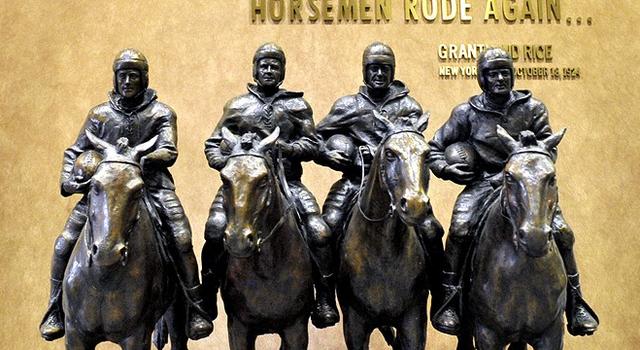 The statue of the 'Four Horsemen of Notre Dame' stands in the foyer of the Guglielmino Athletics Complex, located on the campus of the University of Notre Dame, South Bend. (Photo: Warren Wimmer / IconSMI)

Notre Dame’s preeminence in the history of college football is no accident. But it has been accelerated by the confluence of great coaching, great players and fertile circumstance. If the yang of Notre Dame folklore is “Win one for the Gipper,” a blend of a great coach, a great player on a hospital bed and great players on the field of honor, and the circumstance of a half time deficit against Army, then the yin is the lyrical saga of the Four Horsemen.

Knute Rockne was no shrinking violet, and football may never have seen a more confident coach, but Rockne preferred to coach great players rather than average ones.

While Rockne never claimed to have a “schematic advantage,” he was creative enough to tweak the then au courant single wing to create the box formation. Later, after, urban legend has it, watching a performance of Radio City’s Rockettes, Rockne enhanced it further with the clever “Notre Dame shift.” While proud of his tactics, Rockne stuanchly embraced code which was cleverly articulated decades after his demise: “It’s not the x’s and the o’s, it’s the Jimmys and the Joes.” Or, in this instance, the Harrys, Elmers, Dons and Jims.

Rockne may have been the first regional/national recruiter, as he had no natural, fertile recruiting base.

Willie Sutton robbed banks”because that’s where the money is.” ‘Rockne harvested football rich areas because that’s where the talent was. So to stock his cupboard for the 1921 season, he visited Masssilon, Ohio, where he had played, and recruited Harry Stuhldeher. He wenty out to the Quad Cities and beckoned Elmer Layden from Davenport to join Rockne’s Ramblers. Rock then headed North, hard by the banks of the Fox River and recruited Jim Crowley
from Green Bay. He then went back to Ohio, Defiance this time and got Don Miller , whose three older brothers had attended Notre Dame. Rock had his backfield.

Rock coached them up and they were rarig to go when the ’22 season began. Stuhldreher was nominally the quarterback, albeit that was a different job description in the single wing and modifications like the Notre Dame box. Crowley was the left halfback, Miller the right halfback and Elmer Layden, the swiftest, at fullback. They played both ways, for in those days the rule was that once a player left the game he could not return. Endomorphs need not apply! None of the four weighed more than 162 pounds. Only Layden was “long” at 6’ tall. The others were well short of that.

The Fighting Irish roared through the first seven games unbeaten, before having a prescient 0-0 tie against Army at West Point. The Irish then beat Butler and Carnegie Mellon. The ’22 season ended wth a tough 14-6 loss to Nebraska at Lincoln.

Stuhldreher, Miller, Layden and Crowley, now nicknamed “Sleepy Jim” because of his droopy eyes, were raring to go in ’23. They ripped through the first 7 games including defeating Army 13-0 in Brooklyn, before suffering a defeat to Nebraska, 14-7 once again in Lincoln. The ’23 Irish then ran the table to finish 9-1, only two losses to Nebraska marring the record of these four backs.

Rockne set the stage for the Four Horsemen through promoting

Rockne the promoter, was busy in the offseason. He talked the Army brass into moving the ’24 game into the heart of NewYork City, right on Coogan’s Bluff to the Polo Grounds, the habitat of John McGraw, Christy Mathewson and Car lHubbell those stalwarrts of the New York Giants. That was Manhattan. After all, it was the roaring 20’s and they roared no more gloriously than in New York City. Everything in New York was over the top, baroque, almost rococo. It was the season of the Great Gatsby. Clearly, had he been real, he would have had prime seats at the Notre Dame-Army game at the Polo Grounds.

Rock also was busy coaching his football team. Rock liked to accumulate depth. And Rock coached with audacity. French General Danton, in the French Revolution, repeatedly quoted “de l’audace, encore di l’audace, et toujours de l’audace” It meant “audacity, more audacity and ever more audacity.” Proponents of that quote included ol’ Blood and Guts George Patton and Bo Schembechler. Rock’s singular audacity in ’24 was to not start his starters. He sent his able second string out there first to throw and absorb the first punches, then substituting the first string when the celery was ripe. The second string was aptly named “The Shock Troops.” They set the table beautifully for the Seven Mules and Stuhldreher, Miller, Layden and Crowley.

The ’24 Irish disposed of Lombard and Wabash at home, and they traveled to New York City for the October 18th clash with Army.

The morning fog floated up from the banks of the Harlem Rivesr and lazily curled over Coogan’s bluff. But the late morning sun disbursed the mist as the 55,000 fans, including New York’s finest as well as the advance guard of what would later be named the “Subway Alumni” trekked to Coogan’s Bluff and the revered Polo Grounds. It was neither purely cloudy nor purely sunny.

It was October 18, 1924, and America communicated by Newspaper. Journalism was prized in America and in sports. Poised and ready in the press box was Grantland Rice, a native of Murfreesboro, Tn who had gone to Montgomery Bell Academy (Alex Bars’s High school). Rice was working for New York’s esteemed Herald Tribune. Granny sensed the moment, the magic, and the poetry of Notre Dame football.

“Outlined against a blue-gray October sky, the Four Horsemen rode again. In dramatic lore they are known as Famine, Pestilence, Destruction and Death. These are only aliases. Their real names are Stuhldreher, Miller, Crowley and Layden. They formed the crest of the South Bend cyclone before which another fighting Army football team was swept over the precipice at the Polo Grounds yesterday afternoon as 55,000 spectators peered down on the bewildering panorama spread on the green plain below.

A cyclone can’t be snared. It may be surrounded, but somewhere it breaks through to keep on going. When the cyclone starts from South Bend, where the candle lights still gleam through the Indiana sycamores, those in the way must take to storm cellars at top speed. Yesterday the cyclone struck again as Notre Dame beat the Army, 13 to 7, with a set of backfield stars that ripped and crashed through a strong Army defense with more speed and power than the warring cadets could meet.

Notre Dame won its ninth game in twelve Army starts through the driving power of one of the greatest backfields that ever churned up the turf of any gridiron in any football age. Brilliant backfields may come and go, but in Stuhldreher, Miller, Crowley and Layden, covered by a fast and charging line, Notre Dame can take its place in front of the field. Coach McEwan sent one of his finest teams into action, an aggressive organization that fought to the last play around the first rim of darkness, but when Rockne rushed his Four Horsemen to the track they rode down everything in sight.

It was quite a day for college football, and that very day the Galloping Ghost of the Illini, Red Grange, scored five touchdowns against Mighty Michigan in Champaign-Urbana. Illiniwek 39-Maize and Blue 14.

But the Notre Dame performance was more cherished, and then a Notre Dame student manager took a step to cement the legend of the Four Horsemen. George Strickler got busy as soon as the Irish returned to South Bend and got four horses from a local livery stable. Strickler got a photographer and put a fully uniformed Sleepy Jim Death, Don Famine, Elmer Destruction and Harry Pestilence astride the horses. It remains the most iconic sports photo of all time. Using Rice’s poetry as a fulcrum, the photo spread like wildfire across the wire to every corner of America.

Notre Dame football was no longer a secret. A nation turned its longing eyes to Notre Dame, the Rock, and the Four Horsemen.

And now for the rest of the story. The newly famous Irish and the Four Horsemen had more games to play. They easily dispatched Princeton, Georgia Tech and Wisconsin and prepared to welcome, at last, Nebraska, to South Bend for a mid-November clash. Rock, the seven Mules and the Four Horsemen were not about to lose a third to the Cornhuskers and shellacked Nebraska 34-6. They finished the season unbeaten by beating Northwestern and Carnegie-Mellon. But, remarkably the irish would play another game!

Remember, it was 1924 and the USC series had not yet begun. But out west tthe Stanford “Indians” were unbeaten. They had a marvelous back named Ernie Nevers. They had a coach so brilliant that folks thought they would someday name football leagues after him. He was Glenn “Pop” Warner. Well, the Irish couldn’t pass up the invitation to the Rose Bowl. Notre Dame had never played in one of these new-fangled bowl games and would not again for 45 more years. The Irish “only” had three All America backs. Don Miller was beaten out by the Wheaton Iceman “Red” Grange.

Rock loved his first taste of the West Coast and never looked back. The irish were superior to Warner’s Stanford, winning 27-10. The Irish offense was diversified, Stanford’s concentrated in Nevers the game MVP. And Davenport’s own Layden returned two interceptions of Nevers passes, 78 yards and 70 yards, for Notre Dame touchdowns.

Notre Dame, the Fighting Irish, that little Catholic School founded on a wing, many prayers and Sorin’s dream on a non-descript prairie in northern Indiana was awarded with the national championship. It was the Irish’s first. Deliciously, it would not be the last.

The Four Horsemen graduated. All went on to coach, Layden eventually serving as head coach of his alma mater. But Rockne returned to even greater success. Rock had lost his Horsemen but had a special request from George Gipp that he was saving. And the legend continues today, some 90 years later.