Running back Will Shipley, the nation’s #1 ranked all-purpose running back, has been the most sought after recruit at any position for Notre Dame for the class of 2021.  Shipley announced on Twitter tonight that he will commit somewhere tomorrow, and based on the consensus reaction of the recruiting community, it does not sound good for Notre Dame.

I will be announcing my commitment tomorrow afternoon😎 @BigDubFootball pic.twitter.com/oKUigAISD8

UPDATE: Will Shipley announced on Tuesday afternoon that he indeed is committing to Clemson.  Read up on where Notre Dame goes from here in running back recruiting for 2021.

Shortly before Shipley tweeted out that he would be announcing his commitment on Tuesday, Future Casts and Crystal Balls and whatever any other site calls them all starting pouring in for Shipley to pick Clemson. Usually, when there is a wave of predictions like that, it’s not because they are all just guessing.

If Shipley does pick Clemson tomorrow, it will be a devastating blow to Notre Dame’s recruiting efforts after it seemed like they would be able to recover from the loss of their huge recruiting in March that was canceled because of the Coronavirus.

Shipley was set to be part of that monster recruiting weekend but was tentatively set to visit Notre Dame in June.  He recently told the ND Inside podcast, however, that the only way he would make that visit is if he was committed to Notre Dame at the time.

Notre Dame needed Shipley in this class to have any chance of Brian Kelly’s stated goal of having a top-5 class.  Is Shipley picks Clemson tomorrow, it doesn’t look like there is any sort of path to that kind of class for Notre Dame in 2021.

Notre Dame and running backs coach Lance Taylor put pretty much all of the eggs in the Shipley basket, which would make potentially losing him to Clemson tomorrow all the worse.  If that happens, where Notre Dame goes from here is anyone’s guess.  They put a ton of effort into the recruitment of Shipley at the expense of a minimal running board in case they missed.

Obviously nothing is over until it’s over and anyone who is old enough to remember the Lorenzo Booker saga from 2002 knows things can change up until a recruit signs their letter of intent, but head into tomorrow’s announcement, things certainly don’t sound too good for Notre Dame in this one.

Where Does Notre Dame Go At RB After Missing Top Target Will Shipley?

Is Notre Dame Football About to Lose a Commitment to Oklahoma? 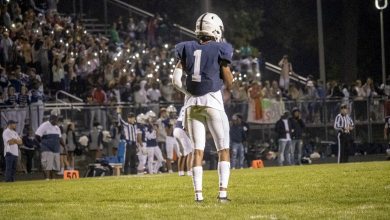