Notre Dame has a few early enrollees on the offensive side of the ball who could force their way onto the field this fall.  On the defensive side of the ball, early enrollment for the six defensive players will be more about development versus immediate impact.  Between the depth at some positions and the raw skills some possess, playing time might not be in the immediate future for most, but long-term, this group offers some fascinating potential for the Fighting Irish.

Gabriel Rubio (DT) – Five years ago, we might be looking at Gabriel Rubio enrolling early and projecting him as an opening day starter for Notre Dame.  Back then, the Irish just didn’t have depth at defensive tackle.  That is NOT the case in 2021 with the Irish running so deep on the interior of the line; it’s very possible that a tackle kicks outside to the strongside end position at times for additional depth.

Notre Dame returns both Kurt Hinish and Myron Tagovailoa-Amosa as 5th-year seniors.  Jayson Ademiola enters his senior year as perhaps the best interior lineman on the squad.  Injuries limited Jacob Lacey’s effectiveness in 2020, but he’ll be back at 100% for 2021.  Junior Howard Cross saw a lot of time in the rotation at the end of 2020 and in the Playoff.  And Rylie Mills was one of the surprise freshman contributors last year as he forced his way into the rotation.

Rubio could do the same as Mills in 2021 because he has the size to play early and was a borderline top-100 player.  He won’t be forced into action too early the way Hinish and Tagovailoa-Amosa were in 2017, though.  Given the depth at defensive tackle, a redshirt season isn’t out of the question for Rubio, but it shouldn’t surprise anyone if he carves a role for himself in 2021 because he’s capable. Regardless of what happens in 2021, the future is very bright for Gabriel Rubio at Notre Dame.

Devin Aupiu (DE) – It should surprise people if fellow defensive lineman Devin Aupiu carves a role for himself, though, because unlike Rubio, he comes in a bit more raw and a bit undersized – he’s listed at just 220 lbs.  Getting on campus early is critical for a prospect like Aupiu because he’s going to need some time with Matt Balis to add some bulk to his 6’5” frame before he’s ready for a role in the rotation.

Notre Dame has had some good luck with players like Aupiu in the past – look no further than 2020 fifth-year senior Ade Ogundeji.  At the same time, there have been cases like Ovie Oghoufo, who Notre Dame also recruited as a raw pass rusher before he transferred to Texas this off-season.

Bulking up is priority number one for Aupiu. There is a lack of depth on the edges of the Irish defensive line right now, but it will probably be 2022 before Aupiu is ready to carve out a role.  A redshirt season seems likely – especially since he didn’t play this fall due to California moving its season to the spring.

Will Schweitzer (DE) – A redshirt season could also be in store for fellow defensive end Will Schweitzer.  Notre Dame listed him at 6’5”, 220 lbs as well on his Signing Day bio, so getting acclimated in the weight room will be the first order of business for him.

For both Aupiu and Schweitzer, the key this spring, whenever practice is allowed, will be to lean on their athleticism until they fill out their frames more.  It shouldn’t surprise anyone if we hear reports about either having some impressive pass rush moves – similar to what we heard about Oghoufo over the years – but it would be surprising for either to work their way into the rotation in 2021.  Spring and fall camps will be vital for their development, though.

Like Aupiu, he too didn’t play this fall as a California native.

Ryan Barnes (CB) – Notre Dame returns a lot of bodies at cornerback, but not a lot of experience.  There is an open corner position with Nick McCloud headed to the NFL instead of using the free year of eligibility granted by the NCAA.  Clarence Lewis figures to have one corner position locked down.  TaRiq Bracy, who started the 2020 season hot before being benched and not played at all down the stretch, will get the first crack at the other, but if his move to the bench wasn’t injury-related, there figures to be a wide-open competition.

Barnes lost his senior season when the state of Maryland pushed its football season to the spring because of the pandemic, so it’s been a while since Barnes played a meaningful snap.  He’ll have to fight his way past junior Cam Hart and sophomores Ramon Henderson and Caleb Offord.

We saw in 2020 that Notre Dame won’t be afraid to play a true freshman at corner if they show they are ready.

Philip Riley (CB) – While Philip Riley is one of the highest-rated cornerbacks in years to sign with Notre Dame, there is some debate about what his best position is on the collegiate level.  Some feel as though Riley is best suited for safety.  At 6’1”, 190 lbs, Riley is physically built to play as a freshman at corner.  If he shows in spring ball that his cover skills translate to the collegiate level, he could play this fall.

If the Notre Dame staff determines that Riley is best suited for safety once they see him in live practices, hopefully, they will learn from how they handled Houston Griffith and just make a move now and develop him there.  They tried to force Griffith into a few other positions he wasn’t the most ideally suited for, and it stunted his development.

Justin Walters (S) – Like many of his fellow early enrollees, Walters lost his senior season and hasn’t played meaningful football since 2019.  Notre Dame listed him at 175 lbs on its Signing Day bio. Some time in the weight room could be in order for Walters before he seriously challenges f spot in a safety rotation tacking experienced depth.

There are questions at safety for Notre Dame in 2021, but Houston Griffith might have answered some of them when he withdrew his name from the transfer portal.  That move suggests that Griffith has the inside track to start, but behind him and Kyle Hamilton, there’s a lot of unproven depth. 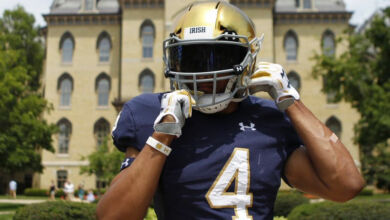