Aiden Gobaira is currently the second lowest-rated recruit among Notre Dame’s 11 commitments for the class of 2022.  That could be changing in the near future, however, because the junior defensive end is grabbing the attention of recruiting analysts around the country now that his junior season has finally started at Chantilly HS in Virginia.

247Sports listed Gobaira as one of ten prospects around the country who have turned heads in the spring football season.  Here’s what they had to say in their write-up.

Chantilly (Va.) High defensive end Aiden Gobaira is off to a stellar start in the spring with six sacks and 25 tackles in three games, and he is doing it after adding 40 pounds to his frame from his sophomore season. The 6-foot-6, 235-pound Gobaira is explosive, shows an ability to fire off the ball at snap, has the speed to get around the edge and he stacks and sheds in the running game. He was dominant as an edge rusher over the weekend against Alexandria (Va.) Hayfield lining up with his hand on the ground and also standing up. He committed to Notre Dame in early February after a visit to campus.

When Aiden Gobaira committed to Notre Dame a few weeks back, we noted that he was the kind of defensive end that Notre Dame has thrived recruiting – raw prospects who are just growing into their frames with big-time upside.  At the time, I was thinking of Ade Ogundeji.  It seems like Gobaira might actually be ahead of schedule though since it took Ogundeji a little longer to bulk up the way Gobaira has between his sophomore and junior seasons.

It will be interesting to see how much bigger Gobaira gets between now and when he reports to Notre Dame.  He’s showing the ability to play the VYPER, or rush end, position for Notre Dame, but if he gets much larger he could also have a future on the strong side.

Either way, it’s starting to become clear that he is probably better than his current #427 overall ranking on 247Sports and that the Notre Dame coaching staff did a great job in identifying Gobaira early on.  Their main competition for his commitment was Mid-Atlantic powers – primarily Penn State. If he keeps playing at the level he’s displayed so far this year, Notre Dame should expect more powers to try to get involved in Gobaira’s recruitment. 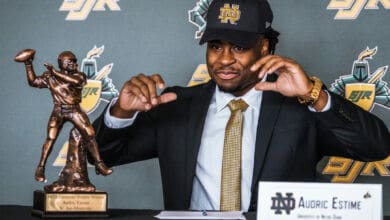 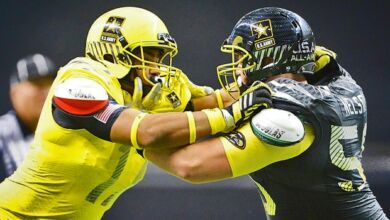 Jaylon Smith Stands Out at Army All American Bowl 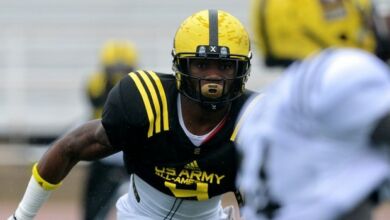