There’s been a steady stream of positive Notre Dame football recruiting news over the last few months, but Sunday night, the Irish got their first bit of bad news in some time. Promising defensive end Darren Agu, a raw pass rusher believed to have a very high ceiling, announced he was decommitting from Notre Dame.

Agu has not played a lot of football, but most project him to be a potential impact defensive end in a few years. Alabama, Auburn, Florida State, Miami, Penn State, and a host of others all offered Agu. That kind of offer list is not typical for a low-rated three-star recruit.

Notre Dame has three other defensive linemen committed for 2022 – defensive ends Aiden Gobairs and Tyson Ford and defensive tackle Donovan Hinish. The Irish are also still pursuing tackle Anthony Lucas and end Cyrus Moss. They also recently offered top-100 DT Hero Kanu. Both Lucas and Moss visited Notre Dame in June and the Irish are considered to be serious contenders for both. Notre Dame just offered Kanu over the weekend, so it’s unclear how much of a player the Irish can be in his recruitment.

Notre Dame also has a pair of elite edge rushers committed for 2023 in Keon Keeley and Brenan Vernon.

According to Irish Illustrated’s Tom Loy, Agu’s decommitment stemmed from Agu looking for a school with a depth chart that will allow him to see the field sooner.

Moving ahead, the schools we’re told to watch include Northwestern or Vanderbilt, in addition to others that could come into the mix in the future. We’re told Agu is looking for a depth chart that will afford him the chance to play early in college, something that likely wasn’t going to happen at Notre Dame. That said, this is a young man with tremendous upside and a guy to watch in the years to come.

Notre Dame’s strong start in 2023 recruiting with Keeley and Vernon could have influenced his decision as well if the depth chart is indeed a concern.

This is a blow to Notre Dame’s recruiting efforts, but the success the Irish have had along the defensive line makes it a manageable loss. Agu was a classic Mike Elston defensive end recruit with tons of upside, but the Irish are deep enough at defensive end to withstand the loss – especially if Notre Dame can lure Cyrus Moss out of Bishop Gorman in this cycle. 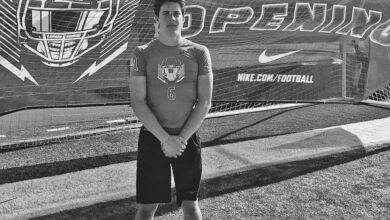 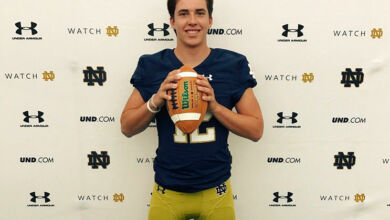