There are a lot of pep rallies held at Notre Dame, but one in particular stands out each and every year: the Dillon Hall Pep Rally.

In the early years of the tradition, the rally was held in the Dillon courtyard that faces South Dining Hall. But as its popularity grew, the stage had to be moved to accommodate a much bigger audience. Now it is held in front of Dillon Hall on South Quad, where it has seen as many as 20,000 fans show up in the best of times.

Instead, the Dillon Hall pep rally featured humorous sketches and skits designed by the men of Dillon Hall, some of which drew complaints for being too offensive to opposing teams and even other dorms (the Dillon Hall motto is “The Smartest, the Strongest, and the Humblest – it was bound to happen).

This is actually why the Dillon Rally was placed on Thursday night; it was designed to be a student-only event, rather than something that the alumni and fans were invited to (because of the vulgar humor). The students typically created a storyline, including little skits about Notre Dame and its stereotypes, as well as skits about pop culture and the world at large, and these were acted out to entertain the entire campus. Integrated into this basic design, special guest speakers were also invited to speak at the pep rally. These guests would typically include the football coach, the safety-enthusiast Officer Tim McCarthy, and the football players who resided in Dillon Hall … including two of my personal all-time favorites: Tony Rice and Brady Quinn. There were also usually appearances made by the drum line, cheerleaders, pom squad and, of course, the leprechaun.

The Dillon Rally has always set the stage for the beginning of the football season. It is the first pep rally that the new freshmen get to witness, and it truly is awesome to see thousands and thousands of fans filling up South Quad. It really showcases the family culture of the Notre Dame student body, as all of the dorms wear their unique colors and show up in great force.

The Dillon Hall Pep Rally just has a special buzz about it. It is a shining example of what the dorm community life at Notre Dame is all about.

If you ever get a chance to catch the Dillon Hall pep rally, I highly recommend it — it is high comedy created by the students of Dillon Hall, and is sure to get you fired up to kick off the season.

A big thank you goes out to Tyler Moorehead for his editing help & perspective on this story. Tyler is a Senior English major at Notre Dame (& writes for CollegeSpun.com). You can catch Tyler on Twitter at — @Tmoorehead627, and his latest College Spun pieces here.

Where Are They Now: Marv Russell 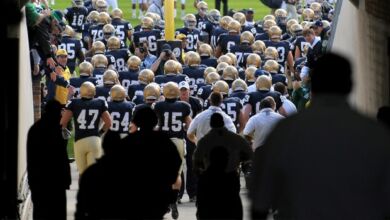 Where Are They Now: Pete Bercich 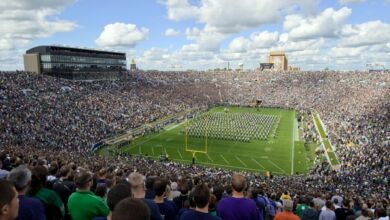 Irish Traditions: Trumpets Under the Dome 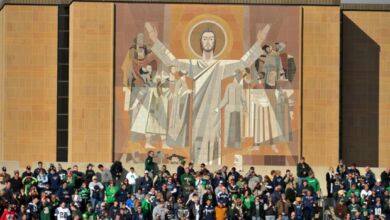