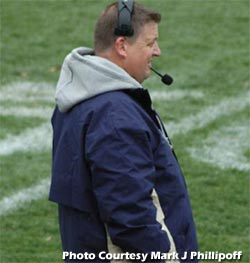 Notre Dame, Ind (UHND.com) — Amid rumors last week that Charlie Weis could leave for the NFL because of a 1.5 million buyout, Notre Dame and Weis put an end to those rumors by announcing Saturday that Weis was signed to a 10 year extension making him the highest paid coach in college football and keeping him on the Notre Dame sidelines till 2015.

Just 7 games into his first season as the head coach at Notre Dame, Weis was awarded for the marked improvement the Irish have shown in his short tenure. After just 5 wins, Notre Dame felt they needed to reward Weis as well as protect their investment.

Kevin White stated that, “”Whether you talk about on-field results, off-the-field understanding of the Notre Dame athletics and academic culture, recruiting, public relations, or any other area, Charlie already has indicated that he possesses the abilities to position our program to compete at the elite level of college football.”

Weis has brought Notre Dame a long way in a very short time and has the Irish on course for just the 2nd BCS Bowl bid since the inception of the BCS in 1998. The Irish are 5-2 with a perfect 4-0 record on the road against the likes of Michigan, Purdue, and Pitt – teams who may be underachieving this year, but teams who have gotten the better of Notre Dame in recent years.

“Since the first day I arrived at Notre Dame as head football coach, one of my primary goals was to be able to see this job through to the time my son, Charlie, would graduate from the University of Notre Dame and to stay in this position until I retire,” Weis said after the extension was announced.

Weis said in his introductory press conference that his intention was to stay with Notre Dame until he retired and he simply reiterated it Saturday with his actions and his words.

I give Notre Dame credit for locking Weis up the way they have with this extension to squelch the rumors of Weis leaving for the NFL. After the last 2 head coaching hires, it was imperative this one be a home run which all signs are indicating it is. It was also imperative that they keep Weis in Blue and Gold which it appears they have successfully done.

Notre Dame also took away one of the reasons people gave for saying Weis would leave in money. The new deal was reported by Chris Mortenson on NFL Countdown Sunday to be worth 30-40 million, noting it is worth closer to the higher end of that range.

Some will be leery of such a long term extension after the premature extension athletic Kevin White gave Bob Davie in 2000 after he got Notre Dame qualified for its first BCS Bowl. However, Weis has brought a level of offense dominance that Notre Dame hasn’t seen in years.

Weis has also brought Notre Dame back in the limelight in recruiting after a few down years in which the Irish failed to sign classes like they once have. Weis has Notre Dame in line to land its best recruiting class since the days of Holtz with 19 verbals and several more top ranked recruits still heavily considering the Irish.

This extension is very good news for Notre Dame and will hopefully put an end to any Weis to the NFL rumors. The deal shows a level of commitment from both Weis and Notre Dame to each other. As the saying goes, actions speak louder than words and this deal spoke loudly Saturday.