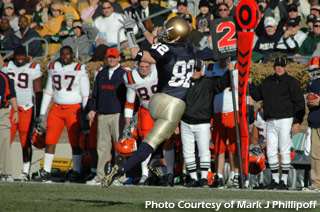 (UHND.com) — The eight 5th year seniors on the Notre Dame roster along with the other seniors who have exhausted eligibility or won’t be back next year played their last home games this past weekend after a roll coaster career that has seen some of the highest highs and lowest lows of the last decade of Notre Dame football.

The 5th year seniors like Mark LeVoir, Dan Stevenson, and Matt Shelton among others came to Notre Dame after being recruited by Bob Davie, were yelled at by George O’Leary for about a week, spent three years under Ty Willingham which saw the Irish have back to back losing seasons, and then closed out their careers with this year’s amazing run under Charlie Weis.

Technically speaking, that’s 4 coaches in their 5 years at Notre Dame. Even the traditional 4th year seniors were originally recruited by the Dave regime and then spoke with O”Leary once or twice before signing on with Ty Willingham.

This year’s seniors also saw the Irish go through a lot of controversy off the field which reached a boiling point last year after Tyrone Willingham was fired after 3 seasons. These young men have been through a lot and every Notre Dame fan can’t help but feel great that they get to leave Notre Dame on such a high note.

The playing careers of these student athletes rivals the roller coaster ride the University has been on since they arrived. Take a guy like Matt Shelton. Shelton spent his first 3 years at Notre Dame trying to make an impact before exploding onto the scene last year with 6 touchdowns and a Notre Dame record 25.8 yards per reception average. Shelton’s 2005 season has been slowed because of an off season injury and he hasn’t been able to be the playmaker he was a season ago for the Irish but it was great to see him catch 3 passes for 62 yards — his best game of the season this weekend.

Then take a guy like Maurice Stovall. Unlike Shelton, Stovall came to Notre Dame with a world of expectations. A Sports Illustrated cover just 4 games into his career as a 17 year old freshman set the bar high for the Philadelphia native. Stovall however spent 3 seasons marred by inconsistency showing flashes of his enormous potential without ever living up to the hype.

Stovall had only 61 career receptions for 1,046 yards and 6 touchdowns his first 3 seasons combined despite playing in 34 games. Stovall however has exploded this year with 53 catches for 887 yards and 10 touchdowns. Eight or more receptions for 159 yards this coming weekend would push his season totals to double his production from his first 3 years.

Then there’s the offensive linemen Mark LeVoir and Dan Stevenson. Both were very highly touted coming into Notre Dame with LeVoir being the jewel of his recruiting class. It’s safe to say both of their careers were a bit bumpy as well with both struggling at times before turning in very solid senior seasons which should earn them a draft pick this coming Spring.

On the defensive side of the ball there’s Corey Mays. The Chicago native patiently waited his turn to take over the starting middle linebacker position for the Irish playing behind Mike Goolsby the last few years, but he’s responded by recording 62 tackles, 9.5 TFL, 4 sacks, 2 forced fumbles, and 3 fumble recoveries this year. Mays’ hit on Matt Leinart near the goal line nearly won the game for the Irish had his forced fumble stayed in bounds. It took Mays 4 years to crack the starting lineup, but now that he has he’s been a wrecking ball for the Notre Dame defense.

Mays partner in crime in the linebacking corps, Brandon Hoyte is one of the few in this crop of seniors who’s career started off with a bang. The New Jersey native redshirted his freshman year, but started 3 games as a sophomore and had 15 career starters in 37 games of action heading into this year. Hoyte also had 205 tackles coming into his senior year with 6 sacks and 19.5 tackles for loss.

Hoyte’s added a team leading 75 tackles and 13.5 TFL to go along with 4 sacks and 2 forced fumbles in his final season of eligibility. Hoyte has also been a winner off the field as a finalist for the Wuerffel Trophy which is given to a student athlete who excels in helping their community while excelling in the classroom as well as on the playing field.

Another senior who has most likely played his final game in Notre Dame Stadium is tight end Anthony Fasano. The talented tight end while most likely head to the NFL after graduating on time from Notre Dame despite another year of eligibility as one of the best tight ends in the country. Fasano has caught 42 passes for 545 yards this season. Fasano didn’t end his home career with a bang, but the New Jersey native has been a major reason for Notre Dame’s offensive explosion this year.

Other seniors like DJ Fitzpatrick, Beidatsch, Brian, and Rashon Powers-Neal (who has been suspended) have exhausted all of their eligibility while most of this year’s 4th year seniors have remaining eligibility.

Fitzpatrick is another great story as a local kid who came to Notre Dame as a walkon, but earned a scholarship. Fitzpatrick has been a steady place kicker and excellent punter for the Irish the past three seasons.

These seniors have been on a rollercoaster ride that looks as though will end up on a high note. A win next weekend and they should end their careers in Tempe, Arizona playing in Notre Dame’s 2nd BCS Bowl game and could be apart of the first Notre Dame team to win a bowl game since the 1993 squad beat Texas A&M in the Cotton Bowl which is hard to believe since it was just a year ago they were part of a 6-6 Notre Dame team that lost to Oregon State 38-21 in the Insight.com Bowl.

Clausen Tears up Hawaii in First Half