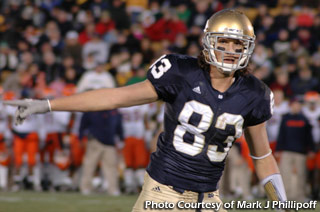 (UHND.com) Jeff Samardjiza wasn’t even on the Biletnikoff Watch List’s radar with just 24 career receptions during his first two years at Notre Dame, but Monday he was named one of 3 finalist’s for the award handed out to the best wide receiver in the nation along with Southern Cal’s Dwayne Jarrett and Oregon State’s Mike Hass.

Samardzija, a junior from Valparaiso, IN, has erupted on the college football scene this year with 63 catches for 999 yards and a school record 13 touchdowns. Samardzija had 24 receptions for 327 yards and no touchdowns before this season, but has developed tremendously in Charlie Weis’ offense.

His season started offense fairly modesty with 3 catches for 34 yards against Pitt with a touchdown, but it was the touchdown grab that gave Irish fans a glimpse of what was to come. Samardzija’s first career touchdown came with the junior was fully extended between two Pitt defenders in the end zone. Samardzija laid out for the ball and turned his body in mid air to protect the ball.

He followed up his season opener by catching another touchdown against Michigan off a deflection, but it was the Irish’s 3rd game in which Samardzija had a breakout performance. Against the Spartans, he grabbed 6 passes for 96 and 3 touchdowns.

Jeff’s had four 100 yard performances — 164 vs. Washington, 153 vs. Purdue, 152 vs. Purdue, 127 vs. Tennessee, set a school record with a touchdown in 8 straight games, and has made a highlight reel of catches including a one handed diving catch against Purdue earlier this season.

Samardzija also had a 99 yard performance against #1 Southern Cal earlier this year including a leaping catch in the end zone to tie the game at 14 in the 2nd quarter.

Samardzija’s has some stiff competition for the award with Dwayne Jarrett who all Irish fans remember very well for converting the 4th and 9 against Notre Dame with the game on the line. Jarrett has 75 catches for 1,070 yards and 14 touchdowns this season in 11 games.

The other finalist, Mike Hass, has the most impressive stats in terms of catches and yards with 90 catches for 1,532 yards in 11 games, but has scored just 6 touchdowns this season.

It is impossible for Samardzija to catch Hass in terms of yards, but with a good game against Stanford this weekend, he should be able to duplicate Jarrett’s stats through 11 games. Jarrett will get an extra game to pad his stats with South Cal’s regular season finale against UCLA however.

Jeff might to end the season with a bang this weekend to really have a shot at ending up with the award based on Hass’ gaudy yardage and Jarrett’s clutch play of the year. A multiple touchdown 150 or so yard performance would really put an exclamation mark to his impressive season.

The Biletnikoff Award was established in 1994 and no Notre Dame player has ever won the award nor made it to the final 3 making Samardzija the first in Notre Dame history.