After running through some players whose careers are coming to a crossroads with time running out for them to make their marks, we started profiling players who could break out in 2014.  We started with sophomore tight end Durham Smythe on Tuesday morning and we are continuing on with another sophomore on the offensive side of the ball – Tarean Folston.

Notre Dame won a heated recruiting battle for Tarean Folston.  Tony Alford led the charge to lure the dynamic running back out of his home state of Florida over the in-state powers on top of a host of elite programs like Oregon, Stanford, Tennessee, and South Carolina.  Notre Dame even survived a late charge from Auburn.

What made Notre Dame’s landing of Folston even more impressive was the fact that the Irish already had secured a commitment from 5-star RB Greg Bryant at the time.  That should also give you a little indication about Folston’s confidence level in his own game.  Any time a running back commits with another elite back already on board you know you have a back that isn’t afraid of competition.

Folston was an Under Armour All-American out of high school and made his commitment to Notre Dame during the bowl practices.  Folston was one of two Notre Dame commits to standout at the game along with then commit Alex Anzalone.  Anzalone never signed with the Irish.  Luckily for Notre Dame, Folston did.

Why Folston May Break Out

Folston got a jump start on his backfield classmate Greg Bryant when a nagging knee injury forced Bryant to shut down his rookie campaign early on resulting in a red-shirt for the more highly rated of Notre Dame’s talented freshmen backs.  Even with the early start on Bryant, Folston took a little while to get comfortable with the playbook and earn playing time in a backfield that lacked a go to back a year ago.

Once Folston was given a chance though, he didn’t disappoint.  In a largely forgettable squeaker of a win over Navy in November Folston had his coming out party with a 140 yard performance on 18 carries including his first career touchdown.  The yardage wasn’t even the most impressive part of Folston’s performance – it was the way in which he picked up those yards.  Folston displayed the kind of vision, balance, and power that you look for in a go to back.

Folston didn’t have another 100+ yard game, but showed enough in 2013 to show that he has all of the tools needed to be a go to back.  With George Atkinson trying to make a NFL roster this summer, the Notre Dame backfield opened up a little bit and Folston ended up at the top of the depth chart coming out of the spring.

Honestly, the only thing that could keep Folston from breaking out in 2014 is an injury or too much balance on the offensive side of the ball for Notre Dame in 2014.  Notre Dame looks like it could have the most dynamic offense we’ve seen in South Bend in nearly a decade (2005).  That might be the only thing that could hold Folston back – not enough carries to go around with Bryant and senior Cam McDaniel in the backfield.

One area that Folston did not shine much as a freshman though was receiving the ball out of the backfield.  Folston caught just five passes for 36 yards throughout his rookie season.  If he is unable to show significant improvement in that area, whichever back does will see some significant playing time on third down.   We did start to see more of that ability out of Folston in the Blue-Gold game though.   Other than that, it is really hard to find a reason why Folston might not have a huge season in 2014.

Folston will start fall camp at the top of the Notre Dame depth chart and baring injury, he is in line for a huge sophomore campaign.  Given the presence of Bryant and McDaniel, it might be tough for Folston to get enough carries to put up jaw dropping numbers this year, but I fully expect the Florida native to end the season with a jaw dropping highlight reel featuring a lot of runs similar to his cut on a dime/jump cut combo run against Navy.

Look for Notre Dame to have a backfield rotation this season similar to what we saw in 2011 when Cierre Wood and Jonas Gray both looked primed to top 1,000 yards before Gray tore his ACL on senior day.  The only difference is Notre Dame will have a third back in the mix this year with McDaniel.  Regardless of how the carries are split out, Folston will have a prominent role in a potentially prolific offense in 2014 and will have a healthy competition with his classmate Greg Bryant for the next few seasons.  Big things are on the horizon for Folston as early as this season. 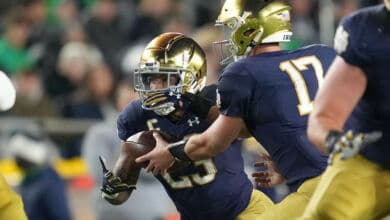