Wow, what a game.  Notre Dame and Stanford’s heavy weight bout yesterday had a little bit of everything.  Turnovers, horrible weather, last minute drives, 4th down conversions, and so on and so on.  In the end though, the Irish prevailed 17-14 and sit at 5-0 with a great chance to be in the top 5 when the polls are released later today.

While it was an ugly game in many ways and there’s a ton of things for Brian Kelly and his staff to work on this week, there was a whole lot to like in their latest victory.  Here’s this week’s 5 Things I Liked column.

This Notre Dame team might be extremely young across the board, but they have grown up in a hurry.  Last week the Irish overcame 5 turnovers and still won “on the road” by 16 points and never really had the issue in doubt.  This week was a whole other story with a top 15 team sporting the nation’s #1 ranked defense coming to town.  After taking their first lead of the game in the 4th quarter the Irish quickly surrendered that lead and found themselves trailing by four with just over three minutes to go in need of a touchdown drive.  And, on 4th and 11 with the game on the line, Everett Golson delivered the game winner in the back of the endzone.

Notre Dame did all of that despite: turning the ball over at the Stanford 1 yard line and missing out on points, turning the ball over inside their own red-zone to set up Stanford’s first score of the day, botching two field goal snaps on very makable attempts for Kyle Brundza, and dropping pass after pass in the driving rain.  Even despite all of that the Irish pulled off a win against a ranked opponent that was favored to beat them.  It’s hard not to love that kind of attitude and winning mentality even it’s is easy to not love the mistakes (more on those in another column).

After three games, Chris Brown was not much of a factor in the Notre Dame passing game, but the junior started to emerge last week and had another solid outing again yesterday.  Against Syracuse, Brown hauled in a team high 6 catches for 57 yards.  Brown paced the Irish again on Saturday with 4 catches this time for 60 yards and his first touchdown of the season.  That touchdown was also Notre Dame’s first score in the game and came after a number of the maddening mistakes that kept the Irish off the scoreboard for the nearly the first 27 minutes of the game.

It was also really easy to like Corey Robinson’s huge 3rd down conversion on Notre Dame’s game winning drive.  Robinson had a tough game with a few drops on a couple of laser beams from Golson, but the sophomore made one of the biggest catches of his career in the final minutes.  Slot receivers CJ Prosise and Amir Carlisle also both had solid outings and could have had even better games if Golson hit them in stride on a few occasions.  Will Fuller had his quietest game of the season yesterday, but the depth at the wide receiver position made up for it.

Stanford’s defense came in with all the headlines, but Notre Dame’s defense showed them up on Saturday.  The Irish held Stanford to just 205 yards of total offense and prevented them from even getting near the end-zone for much of the day.  Stanford’s first touchdown was set up by a Golson fumble inside the 20 yard line and their only real drive of the game was their 4th quarter touchdown that was set up by a great return by Ty Montgomery.

On the day, Notre Dame sacked Kevin Hogan 4 times, intercepted him twice, and harassed him in hurried throws and bad decisions all game long.  Notre Dame also kept Stanford’s running game in neutral all day with the Cardinal picking up just 47 yards on 32 carries.  Sack yardage is a factor there, but even if you remove the sack yards, Stanford ran the ball 28 times for 66 yards (2.36 yards per carry).

Not a bad day at the office for Jaylon Smith and the Irish defense.  Speaking of Smith, the sophomore had a career high 14 tackles including 2.5 for loss.  And speaking of tackles, man did the Irish defense tackle well against Stanford.  Two weeks ago the Irish were missing tackles left and right in the first half against Purdue.  That wasn’t the case at all this week.

Cole Luke deserves a special call out from the stellar defensive performance.  The sophomore corner (how times have I called out sophomores for great play already in this column?) had the best game of his career with both of Notre Dame’s interceptions of Hogan.  Luke’s first came on a badly thrown ball that Hogan was pressured into, but the second was a thing of beauty.  On Luke’s second interception he made a great play on the ball, undercut the wide receiver, and somehow managed to keep his hands under the ball and the ball off the turf as it rattled around a bit before he finally secured it.  Luke has been playing well to this point in the year, but on Saturday he was spectacular. 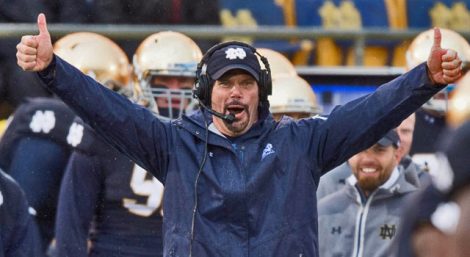 5. The cojones of defensive coordinator of Brian VanGorder

I’ll admit it.  When the final play of the game started to unfold and I saw the all out blitz coming I yelled, ” I don’t like it!”.  I had flashbacks to those Michigan State games in the late 90’s when Bob Davie sent the house on 4th down and the Spartans hit a wide open receiver for a crushing, game winning touchdown.  Then the blitz got there and forced Hogan into his final terrible decision of the game – an intentional grounding penalty that put the nail in Stanford’s coffin.

It takes a lot of guts to call an all out blitz like that with the game on the line because you are essentially putting all the faith in your defense to get there because someone inevitably will be open.  VanGroder did it, put his faith in his defense, and the gamble paid huge dividends.  It’s a do or die type call that could have easily backfired on him, but it didn’t.  He stayed aggressive and his defense ended up sealing the victory.   Playing more conservatively doesn’t always work out either – just ask USC after their defense allowed Arizona State to complete a game winning late second Hail Mary with some form of prevent defense.   At least it looked like some form of defense.  It was hard to tell since ASU made it look so easy.