Often recognized at the definitive university in regards to securing and developing tight end prospects, the Notre Dame has earned the moniker “Tight End U” by consistently showcasing the tight end in their offense, and sending productive prospects to the NFL. As the 2015 season inches closer though, the Irish are seemingly in unfamiliar territory as they are still searching for the heir apparent to former starter, Ben Koyack.

Although there will be four players battling for playing time, the Irish return a grand total of just one catch from 2014 from the tight end position. The fact that the Irish coaching staff has not named who will start under center in 2015 doesn’t factor into the urgency to find a true starter to fill Koyack’s void either, as both quarterbacks will look to the tight end position not only as a safety valve on short yardage plays, but also as weapons in the red zone. Here are the primary players that the Irish program hope will step up in 2015.

I mentioned the one catch from the returning tight ends in 2014, and that came from Durham Smythe. The young man from Texas has the prototypical look for a tight end, coming in at just under 6’5” and 245lbs – very comparable to past athletes who have filled the role. The junior from Belton has paid his dues with patience and hard work, now it would seem it his time to leave his mark. Isee Smythe’s production being closer to what Koyack provided, but not at the level of say a Kyle Rudolph or Troy Niklas.

Although just a sophomore, coaches are excited about the offensive ability that the Illinois native brings to South Bend. Tallying over a 1,000 yards receiving in both his junior and senior year in high school, it’s bulk and strength  that Weishar needs to focus on, if he is to see the field in 2015. With thoughts of the Notre Dame coaching staff gravitating towards the run more in the upcoming season, Weishar still needs to improve in the blocking game, and unfortunately for him, there are at least two current teammates that are stronger in this category. Don’t sleep on Weishar though, as he has talent to be extremely productive in the hybrid offense the Irish run, assuming offensive coordinator Mike Sanford, continues down this path.

The young man from Florida is someone I was extremely excited about when he initially committed with the Irish back in 2012.  Unfortunately, great depth and injuries have made him less than a household name amongst the Irish fan base. Standing at just 6’3” and 230lbs, Heuerman measures more like a wide receiver than a typical Notre Dame tight end. If the Irish were to utilize him in the offense in 2015, it would be likely that he used in plays where the tight end is flexed out, and less in a standard offensive formation. Fortunately for Heuerman the Irish have shown the propensity to do just that in previous seasons. As much as I love Mike, and trust me I do, it feels like Mike will struggle to see the field often in 2015, which is sad.

The young man who actually started in the Music City Bowl for the Irish is a true enigma, for us at least. Only a sophomore, Luatua has the body and skill-set of a full-blown senior, and the ability to have the same type of impact. Standing at just under 6’3” and approaching 280lbs, Luatua looks the part of an offensive linemen, but this is most definitely a case of don’t judge a book by its cover. Luatua gives the Irish incredible versatility when on the field, with his ability to catch, block, and simply take up space. The style of offense Sanford and Kelly decide to favor could play a huge role into determining how much playing time the California native sees in 2015, but it would not be surprising to see him and Smythe get equal opportunities for the upcoming season. 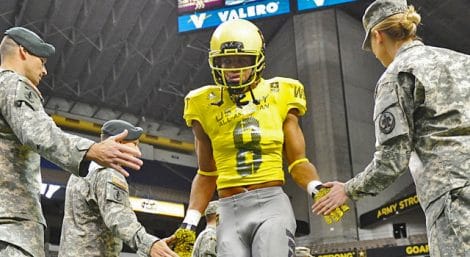 I know that many are excited about what Aliz’e Jones brings to the table in regards to being a huge offensive threat for the Irish, and rightfully so.  While Jones may be the next true great tight end for Notre Dame, I highly doubt it will be in 2015. There is no denying the ability that he brings to the table, and eventually  he will be given the chance to showcase his talents, but it probably won’t be in 2015 – sorry Irish fans.

Is there reason for concern for the staff as they look to solidify the tight end position for 2015? Absolutely, but they can take solace in knowing they do have talent and depth, but severely lack experience. One of the bigger concerns is that because the Irish offense utilizes the tight end position so often, that it could have yearlong effect on the offense if the position isn’t  solidifed. At this early stage it would seem that the job is there is for the taking for the Texas Native, Durham Smythe, but don’t sleep on the others I have mentioned. There are not a lot of questions about the Irish offense heading into the upcoming season, but the battle to fill the void left at the tight end position is definitely one of the more intriguing ones, and one that deserves the staffs full attention. 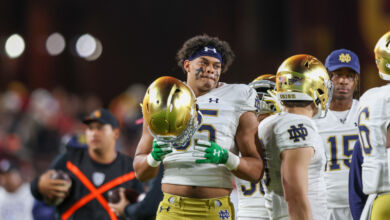 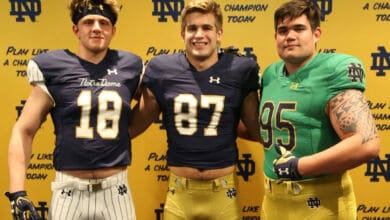 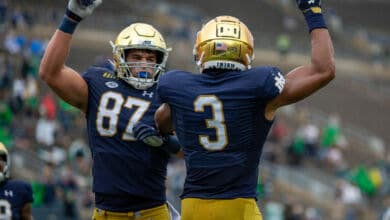 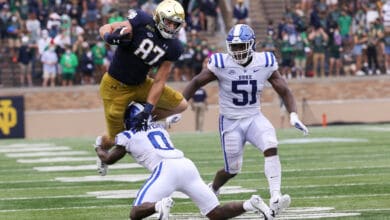