A somnambulant, diffident Notre Dame team did just enough to beat young, eager Wake Forest 28-7, to move to 9-1. The win completed the second unbeaten home slate under Kelly, with the other in 2012. That feat had not been accomplished since Bob Davie’s relative home masterpiece in ’98.

The offense, which succeeded against two sound defenses of Temple and Pitt seemed sluggish against the Demon Deacons.

The Notre Dame defense, after a run of Clemson, Navy, USC, Temple and Pitt, found someone it could bully in the Wake Forest offense. The Irish accrued 8 tackles for loss, 3 sacks, Trumbetti’s interception and a forced fumble, when the Irish defenders had a brain cramp and permitted the Deacon offense to claim the unclaimed pigskin property that lay on the turf. Several defensive penalties extended Wake drives and the Irish defense played its most dim-witted game of the season.

With Cage out, Keith Gilmore tinkered with this defensive line, with mixed results. Isaac Rochell was moved inside to tackle. Rochell was merely adequate at tackle, not the edge-setting and disruptive force he is at defensive end. Trumbetti showed that he is ready for prime time. Grant Blankenship, Jon Bonner and even Doug Randolph got some snaps at defensive end.

His only shortcoming is that he is not twins. Wake’s last significant drive to the Notre Dame goal line showcased Smith’s greatness, range and playmaking ability. On third and goal, Smith lasered into Wolford on a blitz to force an errant throw. On fourth down, Jaylon dropped into coverage and prevented the reception. He checks every box of the linebacker job description. It has been an honor and pleasure to watch him play for the Fighting Irish.

Was this a statement game by the Notre Dame Defense?

No. It was domination of an undermanned opponent. It has no probative value of what might occur in Palo Alto. But keep an eye on Max Redfield. He had a second outstanding game in a row. Notre Dame just might have a solid pair of safeties for the stretch run. Greer Martini, as is his wont, was a solid fill-in for James Onwualu, he of the ominous iced left knee.

While all of Notre Dame’s points were scored by frosh and sophs, Trumbetti’s was the most fun, grabbing an interception when Sheldon Day tipped not the ball but Wolford’s psyche and Andrew romped into the North End zone. Josh Adams had a nice 98 yarder, punctuated by a serious stiff-arm with some some nice downfield blocking and companionship from Chris Brown and Will Fuller.

The Irish are much better, ranking 24th in America in the Phil Steele rankings published weekly. Tyler Newsome showed his ability to kick the ball both far and into the ancient “coffin corner” when required. He nestled three of his five kicks inside the 20.

Notre Dame Against the Numbers

Wake Forest came into the game averaging only 18.7 ppg. The ND defense held them to 7. So there’s that Wake came in averaging 340 yards of total offense. The Irish D held them to 340 total yards. So much for being average!   Wake’s relatively stingy Deaconite Defense had allowed 23 ppg. The Irish totaled 28. The lads from Winston-Salem were allowing only 345 yards per game. Notre Dame totaled a shameful 282 yards.

Players who exhaust their eligibility this year

To summarize, the only players who CANNOT play another year are

Brown Carlisle, Day, Farley, Hounshell, Martin, Okwara Schmidt, Shumate. That is only 9. Grace and Sebastian have a scintilla of an argument for a 6th year because of multiple year injuries. Baratti, Harrell and Turner seem unlikely to be invited back. That’s 12.

Always a nostalgic moment. In days of yore, it would even bring a tear to Fat Eddie’s eye, as the rich supply of newcomers at the Rock, glistening, yearning for towels, would dry up until next Fall! O tempora, O mores!

But this home season ended differently. Not only is Team 127 unbeaten in Notre Dame Stadium, it won every home game by 8 or more points, with Georgia Tech scoring two late touchdowns to create a deceitful final tally.   This team leaves not with despair or futility but with hope as it embarks on the open road, to Boston, Palo Alto and beyond.

What will we see against Boston College

Notre Dame Trudges on to 9-1 Record 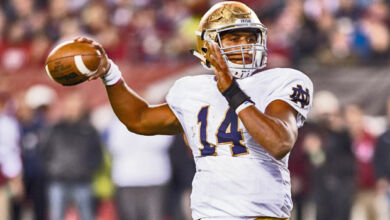