Notre Dame has officially begun to hype the new jumbotron inside Notre Dame Stadium that will be used for the first time in a game on September 2 for the season opener against Temple.  Over the last couple weeks the official Notre Dame Football Twitter feed has been sending out teasers of the jumbotron.

On July 13 they sent out this.

Then a day later, they sent out this.

Coming to a videoboard soon… pic.twitter.com/FGNiOKkCXT

With each tweet, the pressure for Notre Dame to pull this off mounts.

Why is there pressure on Notre Dame with this jumbotron you may ask.  Well, simple.  There is a large contingent of the fan base who has always been – and may always be – against even the idea of a jumbotron inside Notre Dame Stadium.  To some, adding a jumbotron makes Notre Dame just like everyone else and is just another change to the stadium that they feel would have Knute Rockne rolling over in his grave.

Many of these same people will be looking for any excuse to jump on Notre Dame if their execution with the jumbotron fails in anyway.

The Concerns Over the Notre Dame Jumbtron

Just what are some of their concerns?  Some are worried that Notre Dame will plaster the jumbotron with ridiculous ads that litter other video boards throughout the country.  Some jumbotrons look more like the classifieds section of a newspaper when they aren’t on with ads and brand logos plastered all over.  Well if you look close at all of those images, you’ll notice that no such ads or logos appear on Notre Dame’s.

In fact, Notre Dame has made it clear throughout the Campus Crossroads that there still will be no in stadium advertising inside Notre Dame Stadium.

Ok, so with the concern about ads out the window, what are some other concerns.  There’s the programming itself.  Jumbotron content can tend to be a bit fluffy and self promoting.  Well, good luck trying to convince any organization to not self promote on a jumbotron inside their own stadium.  Oh and spoiler alert: there is no way in hell any organization will create content that pleases all of their fans let alone the insanely finickle Notre Dame fan base.

The Defense’s Case Holds Some Water

Concerns with the execution of the jumobtron are somewhat valid.  Remember when Notre Dame introduced music inside Notre Dame Stadium back in 2011?  The sound system wasn’t really set up for it and they played the same handful of songs – Crazy Train by Ozzy Osbourn specifically – over and over and over again to the point where it became comical.  When that happened the Notre Dame message boards roasted Notre Dame for not being fully prepared.

The stakes are much higher with the jumbotron though because of how much resistance there still is to it.  With each tweet there is generally a string of responses of groans or messages on the boards bemoaning the presence of such a monstrosity inside Notre Dame Stadium.

Another spoiler alert:  Knute Rockne was an innovator and the arguments that he is rolling in his grave are very likely highly inaccurate.  If anything, Rock just might be upset that it took Notre Dame so long to catch up to the rest of the country in terms of enhancing the in-game experience.  Considering color television was still years away from even being a thing at the time of Rock’s untimely death, making any argument that he would be opposed to having a jumbotron inside Notre Dame Stadium is silly at best.

The fact is Notre Dame has fallen behind the rest of the country in providing an in-game experience that creates a more lively and dare I suggest rowdy environment.  Yes jumbotron haters, it is possible to have an electric environment without one like the 1993 Florida State or 2005 USC games.  All it takes to pull that off is the latest edition of the game of the century.

For games like Temple or Miami of Ohio – games that are necessary nestled around marquee matchups – ya need a little bit extra to get the crowd fired up.  That is where the jumbotron can play a huge role.  And that brings us back to the pressure facing Notre Dame to pull this off.

Notre Dame can use the jumbotron to reduce the lull that happens during the lengthy NBC TV timeouts.  Sorry, but honoring the Irish Guard from 1962 or the Badminton team from 1984 during those nap length breaks in the action ain’t cutting it.  Highlights from great Notre Dame victories or highlights from past and current greats, on the other hand could.  Such highlights should be on full display in the moments before kick-off to with dramatic music whipping the crowd into a frenzy as well.

Then there is the whole benefit for those in attendance to actually know what is happening during a replay or when there has been a close play.  How many times have you been in the crowd and felt completely lost on a close play?  The energy gets sucked out of the stadium during any reviews.  If Notre Dame kept showing a play over and over that they clearly know will be going in their favor, however, the energy can build back up during the replay.

Or how about when the quarterback of Notre Dame takes head shot after head shot with no flags like Deshone Kizer did against Virginia Tech.  Think playing those clips over and over and over again will get into the heads of officials who never have to worry that the 80,000+ in attendance will see their screwups?

In the words of Proximo from Gladiator, Notre Dame has to win the crowd with the jumbotron. If the jumbotron is full of kiss cam gimmicks and repetitive video clips, they’ll lose the crowd   If they shy away from using the jumbotron to highlight the mistakes of the officials, they will lose one of the primary benefits of its presence.

With all of the benefits the jumbotron gives Notre Dame the only thing that can give its critics any sort of voice this season is Notre Dame itself.  If Notre Dame sticks the landing here, the benefits of the ‘tron will be so apparent that any remaining complaints will be more than drowned by the sound of dramatic montages clips. 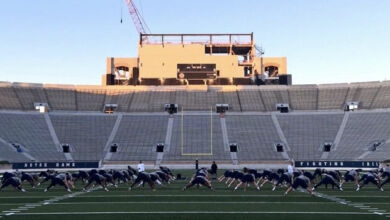 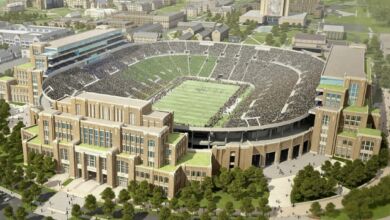 Notre Dame Stadium is Getting a Jumbotron 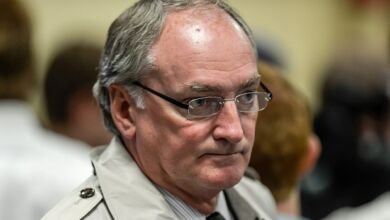