Even today Brian Kelly couldn’t officially acknowledge that there was or wasn’t any suspension for Notre Dame senior running back Dexter Williams.  He did his best to dance around the inevitable questions about Williams expected return to the Notre Dame lineup though while indicating the electrifying runner was indeed back.

“Well, he’s been working with us. He’s been practicing. He’s been with us. He just hasn’t been up to the level that we wanted him to,” Kelly said at his weekly presser.  “He’s done a really good job. I expect that this week could be a week that he plays.”

Translation.  Yes he was suspended like everyone knew and yes he is back this week when #7 Stanford comes to town for the first showdown of top 10 teams inside Notre Dame Stadium since the Bush Push in 2005.

As if getting Williams back wasn’t good enough news for Notre Dame though, Kelly told the media that the Irish were getting an improved version of the runner we have seen in the past.  “He’s better in all facets than the Dexter Williams version that we had in the spring,” Kelly added.

Williams has been practicing with the team all summer long and through the first four games.  He just hasn’t been getting first or second team reps as Notre Dame has been working in the younger backs who have carried the load the first four weeks of the season.  “We’ve worked him through our team periods over the last few weeks, whether it be our blitz pickup period or our skelly period,” Kelly said.  “He’s ready to play for us this week if he continues to do what we expect him to do.”

How Kelly and Chip Long work Williams into the mix after he hasn’t gotten any game reps this season remains to be seen.  Some have indicated that Williams will still have a light load this weekend and that Notre Dame will still lean on Tony Jones Jr and Jafar Armstrong as they have over the first quarter of the season.

“Where do I think he fits in? I think he’s explosive. I think he gets into the second level, and he’s an explosive back,” Kelly said.  “Does he have 20 carries in him this week? Probably not, but I think he can be integrated within a backfield that is emerging and getting better each and every week,” he would add.

That does make some sense given that both Jones and Armstrong have had their moments and have been improving each week behind an offensive line that has been improving right along with them.  That said, neither has the explosiveness that Williams brings to the table and even Kelly admitted that immediately after saying Williams probably wouldn’t carry the ball 20 times.

“I would just answer your question, I think that explosiveness, especially at the second level, I think he adds very nicely to that,” said Kelly.

Notre Dame has lacked the big plays in the run game that were the hallmark of Notre Dame’s rejuvenated running back a season ago this year.  I wrote last week that Notre Dame was severely missing Williams this year because the big plays that Josh Adams provided on a weekly basis have not been present so far this year.

Even last week as Notre Dame ran for 240 yards, there were several instances where Tony Jones Jr got into a bit of opened field where a back like Williams or Adams would have had a chance to take it the distance where Jones was unable to.  Adding Williams back into the Irish backfield gives the offense that element and makes it even tougher to defend now that the Irish passing game has shown signs of life under Ian Book as well.

While it’s not likely that Williams will see 20 carries this weekend, let’s not forget that it’s not as though Williams is returning from an injury and needs to be worked back into shape.  Williams has been healthy and practicing all this time – he just hasn’t been getting game reps or 1st / 2nd team practice reps.  From a physical standpoint, Williams should be more than ready for whatever carries he does get.

For comparisons sake, Cierre Wood was suspended for the first two games of the 2012 season, but came back in time for Notre Dame’s trip to Easy Lansing to take on the then #10 ranked Spartans.  Wood carried the ball 10 times for 56 yards and led the Irish in rushing.  Theo Riddick registered more carries than Wood in his return to the lineup, but that night when facing a top 10 opponent, Kelly showed no aversion to giving Wood a good amount of work.

With a stout Stanford defense on tap this weekend, Notre Dame will need Williams’s explosiveness.  Remember, three years ago at Stanford, Josh Adams carved up the Cardinal defense in defeat.  Last year, however, a banged up Adams was limited to just 49 yards on 20 carries as Stanford dared Notre Dame to pass the ball.  With the emergence of Ian Book, Stanford just might not be able to do the same – or at the very least have the same results.

Whatever role Williams plays for Notre Dame this week, his return is a very welcomed addition to an offense that finally showed signs of life last week and has the potential to continue to improve each week should Book’s performance against Wake Forest be more of a sign of his own progression and not just the the result of a poor defense from the Demon Deacons. 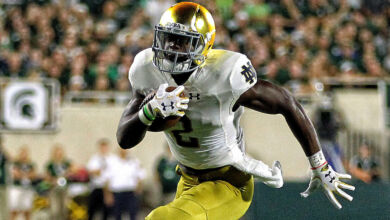