The Notre Dame Stanford series had an enchanted beginning.  Pasadena’s Rose Bowl Committee had been itching to get Rockne and Notre Dame to play in the Rose Bowl and they struck it rich after the 1924 season.  Rockne, Notre Dame and the Four Horsemen would be playing Stanford in the Rose Bowl.  Stanford was coached by a coach so good they’d name a league after him, Pop Warner.  Stanford’s then Indians were led by Ernie Nevers, who failed to win the Heisman Trophy only because they didn’t start awarding it until 1935.  But Rockne trumped Warner’s Nevers with Four Horsemen and the Irish won easily, 27-10.

Stanford began appearing more frequently beginning in 1963, and then in 1999 the series was rearranged to match the USC template, but in alternate years.

Notre Dame, consistent with the graciousness in the USC rivalry, acquiesced to Southern Cal’s request to play the games in South Bend in October.  So each year, beginning in 1999 Notre Dame would entertain a West Coast team, either USC or Stanford,  in October. Then, each November, often on Thanksgiving weekend, the Irish would finish the schedule with a game in either LA or Palo Alto. It lends a lot of drama and some significant recruiting benefit for ND’s last regular season game each year to be in California.  Stanford, however, has made a few rare late September visits to South Bend as well such as 2010 and 2018.

Stanford: A Thorn in Lou Holtz’s Side

Two very different, but sympatico, coaches made life difficult for Lou Holtz’s Irish in the early 90’s. In October, 1990, Dennis Green brought what would be a 4-6-1 Stanford team into South Bend and upset the unbeaten Irish 36-31.

An unkinder cut was delivered two years later by Bill Walsh, who had fully debriefed Holtz while serving as a Notre Dame game analyst for NBC. On October 3, 1992, Walsh led the now Stanford Cardinal into South Bend and beat the Irish soundly 33-16.  It was the only Irish loss of the season.  The Irish were used to having Southern Cal deny the Irish a shot at the national championship. But it was a bitter herb for Stanford (and BC a year later) to keep the Irish from the promised land.

Never Overreact to a Single Game

Perhaps even more devastating and insidious was what Stanford did to Notre Dame in 1997.  On October 4, 1997, defensive whiz Bob Davie led his Notre Dame team into Stanford Stadium to play the Cardinal.  Shockingly, the “soft” Stanford team ripped Notre Dame’s defense apart for a mind-boggling 320 yards ON THE GROUND and trounced the Irish 33-15.

Those ever vigilant Notre Dame administrators sat up and took notice, and felt that a coach who could generate such a victory with a resounding ground attack belonged on Notre Dame’s “short list” for future coaches.  After all, with academic restrictions even greater than Notre Dame’s this guy had produced a squad that could out-tough and out muscle the Irish.  So they added his name to the short list and placed it near the top.  The name was LIONEL TYRONE WILLINGHAM.

Davie wound up winless against Stanford in Palo Alto. But the IRISH later embarked on a seven game winning streak between Willingham and Weis.  In fact, the two Irish coaches, both of whom were shown the door before their the contracts expired, held a 7-1 record against the Cardinal.  Stanford did, however, put the final nail in Weis’s coffin with a 45-38 victory in the final game coached by Weis at Notre Dame.

After Harbaugh got his sea legs under him, he beat Notre Dame twice with a very physical brand of football before leaving for the 49ers. David Shaw has attempted to keep the Harbaugh template in place and Stanford has dominated the rivalry since his arrival.

The series has survived the ACC initiative and is scheduled indefinitely into the future.  Notre Dame’s California initiative, begun with the Rose Bowl of ’24 and the USC series in ’26 is here to stay.

Since taking over the reigns from Jim Harbaugh in 2011, David Shaw has made it is his business to ruin Notre Dame fans Saturdays.  Shaw comes into the 2018 season with a record record of 5-2 against the Irish.  While his record is fairly one-sided, the games have not been.  In fact, the Notre Dame – Stanford rivalry has quickly become one of the most entertaining rivalries in all of college football – unless you are a Notre Dame fan.

Since Shaw took over for Harbaugh, all but two of the games have been decided by one possession and the two that weren’t, were both one possession games deep into the fourth quarter.  There have been a few thrillers along the way with booth teams having their moments.

The 2012 showdown was a classic in every sense.  ESPN College Gameday came to Notre Dame for the first time in seven seasons during Brian Kelly’s resurgent 2012 campaign.  The two wouldn’t disappoint their hosts with an overtime thriller that ended with one of the greatest goal-line stands in Notre Dame football history.  The Irish prevailed and the victory propelled the Irish toward an undefeated regular season and a spot in the BCS National Championship game.

Two years later the Irish and Cardinal played another thriller in Notre Dame Stadium.  The Irish, undefeated at the time, found themselves trailing late, but were lead back by Everett Golson who connected with Ben Koyack on a 4th and goal for the game winning touchdown in the final seconds.

The very next season Stanford would get revenge on the Irish.  With Notre Dame desperately trying to stay in the college football playoff hunt in the season finale, the Irish were once again led on what appeared to be a game winning touchdown drive in the final minutes – this time by Deshone Kizer.  Alas, Kizer’s heroics were not enough when the Brian Vangorder led Notre Dame defense failed to keep Stanford from retaking the lead as time expired.  The Irish defense let Stanford march down the field in less than a minute for the game winning score.

Stanford’s 2015 victory started a three game winning streak for the Cardinal that they are currently riding into the 2018 showdown that finds both teams ranked in the top 10. 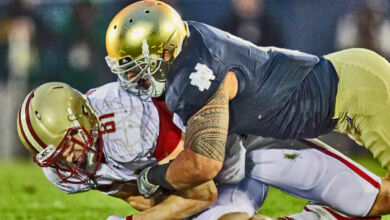 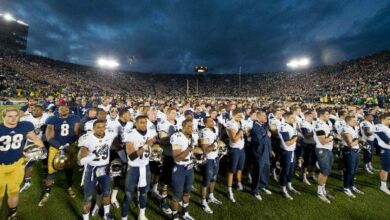