While the likes of Khalid Kareem, Julian Okwara, Chase Claypool, and a few more former Notre Dame players are busy preparing for the 2020 NFL Draft, Notre Dame’s Jeremiah Owusu-Koramoah is already catching the eyes of draft experts for the 2021 Draft.  “Wu,” Notre Dame’s starting ROVER, has been trending toward stardom for a while now.

Here’s what ESPN’s Todd McShay tweeted out yesterday while studying up on Notre Dame prospects for this year’s Draft.

Trying to study four Notre Dame draft prospect for this years class but LB 6 Owusu-Koramoah keeps distracting me! This dude is all over the field on three tapes studied so far. #nfldraft2021 pic.twitter.com/Jf3z58zHv5

After missing almost all of 2018 due to injury and redshirting as a freshman in 2017, Jeremiah Owusu-Koramoah exploded last year.  He led Notre Dame in tackles for loss with 13.5, including 2.5 in the Georgia game that caught McShay’s eye.  He then closed the year with an absolute monster performance in the Camping World Bowl that landed him on ESPN’s “All Bowl Team.” JOK racked up 3.0 sacks and 4 TFL while forcing one fumble and recovering another against an Iowa State team that had no answer for him.

Owusu-Koramoah technically has two years of eligibility left, but don’t get your hopes up because if he improves on his 2019 performance this fall at all; he is going to be a very high NFL Draft pick.  Even if he just replicates what he did, he will be on everyone’s NFL radar.

Just to toot my own horn here a bit, I did have JOK rated higher than anyone else in our 2019 Notre Dame player rankings at 16th even though that turned out even be too low.  At the time though, I did write, “Remember, JOK was the first player Notre Dame recruited exclusively as a ROVER after the hiring of Mike Elko in early 2017.  I expect a breakthrough campaign from him this fall.”

Wu represents one of the rebooted Notre Dame staff’s huge recruiting wins in the aftermath of the 2016 disaster.  After Brian Kelly shook up his staff following that nightmare season, his new staff made a slew of late offers that turned into players like Jafar Armstrong, Myron Tagovailoa-Amosa, Kofi Wardlow, Jonathan Doerer, Jordan Genmark-Heath, and Wu.  Four of those players are expected to be frontline starters in 2020.  Aaron Banks committed after the season ended too, but he was on Notre Dame’s radar long before the staff shakeup.

While Notre Dame’s last two ROVERs both moved to BUCK for their final seasons at Notre Dame, don’t expect to see Owusu-Koramoah get many looks there this spring or fall.  He is a perfect fit at ROVER, and with the direction the NFL is headed, athletes of JOK‘s mold – smaller, fast, crazy athletic linebackers – have more of a home than the traditional 245+ lbs linebackers of the past.

Notre Dame has some questions at BUCK this year, but they do not have any at ROVER with JOK looking like a star in the making and Paul Moala waiting in the wings.  Get used to JOK getting more and more national attention and enjoy all the havoc he causes this fall because at the rate he’s going, a 5th year is not in his future – a high draft pick is. 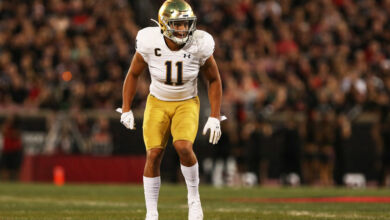 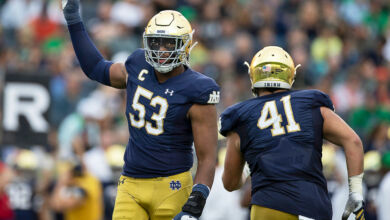 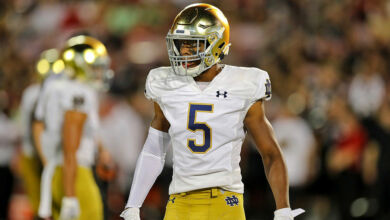