During the Camping World Bowl last month, Notre Dame ROVER Jeremiah Owusu-Koramoah was a one-man wrecking crew.  He was a heat-seeking missile against Iowa State.  His performance earned him national recognition earlier this week when ESPN named JOK to their 2019 All Bowl Team.

Against the Cyclones, Owusu-Koramoah racked up 9 tackles, 4 TFL, 3 sacks, and he forced and recovered a fumble.  He was everywhere and was a major reason why Notre Dame shut down an offense that had enough firepower to make that bowl interesting.  Notre Dame’s defense, however, never let Iowa State get comfortable as JOK and crew harassed ISU quarterback Brock Purdy all day long.

The rest of ESPN”s All-Bowl team reads like a virtual Who’s Who of elite, NFL-bound athletes across the country so JOK is in some great company here.

2019 was a huge year for Owusu-Koramoah and this accolade is just the icing on the cake. Over the last two years, JOK flashed the kind of raw potential that had previous defensive coordinator Mike Elko so quick to offer him when he was hired in January of 2017.  An injury in camp in 2018, however, derailed his sophomore year so he started 2019 with little experience.

From week one on, we saw Owusu-Koramoah give us glimpses each and every week of the kind of wrecking ball he could be for this defense.  Early on we also saw glimpses of his inexperience causing him to overpursue and be out of position.  Those latter instances became few and far between, however, as the season progressed.

Heading into the 2020 season, JOK is one of the cornerstone pieces on a Notre Dame defense that must replace six starters (Khalid Kareem, Julian Okwara, Troy Pride, Jalen Elliott, and Asmar Bilal).  He, along with Kyle Hamilton, gives Notre Dame its best chance for a star player.   After what we saw at the end of the season, it’s  not out of the realm of possibility for Owusu-Koramoah to be an All-American candidate for the Irish in 2020.

There will be some speculation this off-season about whether or not Notre Dame should move him to BUCK just like they did their previous to ROVERs – Drue Tranquill and Bilal – but in this case, it seems like JOK is such an absolute perfect fit at ROVER that it is best served this defense to keep him right where he is and let him do what he did to Iowa State, to every one on the 2020 Notre Dame schedule. 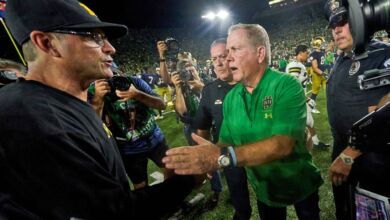