Notre Dame fans have to already be tired of the flip-flopping news regarding Notre Dame and Wisconsin’s October showdown scheduled to take place in Lambeau Field.  On Tuesday, though, Brian Kelly confirmed that Notre Dame’s games in NFL venues this year are still in flux.

Earlier in the day on Tuesday, Brian Kelly told NBC Sports Network that all of Notre Dame’s games in NFL venues could be moved backed to campus.  When asked for clarification on that during a virtual press conference, Kelly confirmed that moving those games is under consideration without mentioning any one specifically.

“I think all those are all under consideration.  They are not my decisions to make,” Kelly told the media.

There are two levels of uncertainty about the Notre Dame schedule that Kelly confirmed on Tuesday as well.

“One of the things we need to keep in context, in terms of ‘what does our schedule look like,’ is what happens in the Big Ten? What happens in the Pac 12?  Because those are the two impactful games that influence our schedule outside of Navy (and) Western Michigan,” Kelly said before adding that Notre Dame feels all the ACC games are solid at this point.  “We are going to be feeling we can be whole with the ACC.”

The three games that Kelly is referencing here are USC, Stanford, and Wisconsin. Interestingly enough, Kelly did not mention the SEC with Notre Dame playing Arkansas in September, but of all the conferences, the SEC is generally considered to be the one least likely to make any changes to its schedules this fall.

Like Notre Dame fans, Kelly and Notre Dame are anxious to get that certainty as soon as possible.  “Once we do, we’re going to make it public because we want that to be binding.  We’re waiting on some further clarification on those things, but we’ve got some backup plans as well.”

With regards to all of the NFL venues that Notre Dame has this fall, Kelly also admitted those venues could be subject to change.

“That, coupled with the venues, become schedule issues that Jack Swarbrick is going to have to negotiate and work out,” Kelly said.  “The NFL is talking about capping attendance at stadiums.  So questions come up like does it make sense to go to an NFL stadium that seats 60, 70, or 80,000 and have 25 or 30,000 in it and impact the gate to a level where you really can’t afford to be there because it becomes a losing proposition.”

This should not come as any surprise to any Notre Dame fans.  Over the last two weeks, we’ve heard conflicting reports on whether or not the game at Lambeau would take place.  Most recently, Packers CEO Mark Murphy said over the weekend that as far as the Packers are concerned, that game is still taking place.

Right up until the news that the Notre Dame – Navy game was moving to Annapolis from Dublin, though, we also heard from Navy athletic department officials that they were hopeful the game would still take place.

As Kelly admitted, though, does it make any sense to have a game in an NFL Stadium if attendance is reduced so much that it’s a losing proposition for all parties?  I’ve been mentioning that in most of my articles regarding the schedule for the last few weeks.  What Kelly didn’t mention is the additional risk for NFL teams having a few hundred extra players in their facilities using the locker rooms.  That’s another consideration for the NFL venues.

“Those are things that have to be worked out before we can say ‘this is the schedule.’  We’ve got a couple of months.  These are the things that people need to keep an eye on that need to be massaged.”

Expect there to be more conflicting reports as all of these details are ironed out in this unprecedented time.  As the entire country moves into the re-opening phase of the country, we just don’t know what future hurdles might pop up.  Notre Dame and every other university have to be prepared for scenarios that have just never occurred and probably were unfathomable only four months ago. 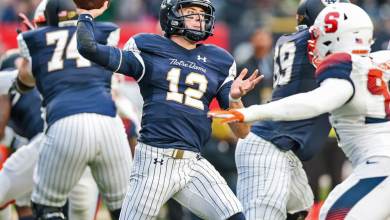 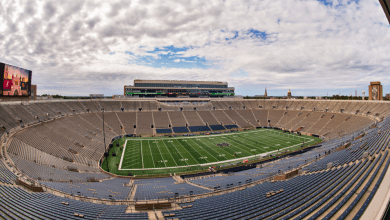