Clutch plays in the final minutes of regulation and in the second overtime helped the Notre Dame Fighting Irish defeat the Clemson Tigers, 47-40, on Saturday night. The victory boosts the Irish’s season record to 7-0 and puts them in prime position for a berth in the College Football playoffs.

Trailing 33-26 and just 1:41 left in the fourth quarter, Notre Dame quarterback Ian Book led an eight-play, 91-yard drive that culminated with a four-yard touchdown pass to Avery Davis with 22 seconds left. The two teams each scored touchdowns in the first overtime, with the Irish then notching one to start the second extra session. Notre Dame’s pair of sacks to start Clemson’s final drive put the Tigers in a huge hole and helped clinch the victory.

Below are some of the key facets of the game:

Facing a team the caliber of Clemson required Notre Dame to avoid getting behind early, which they did in dramatic fashion on the first play from scrimmage. Kyren Williams‘s 75-yard run gave the Irish a 7-0 advantage just 33 seconds in the game, with Notre Dame then adding a field goal on their next drive.

Clemson finally answered the challenge, requiring just four plays to slice their deficit to three points at 10-7 as they converted on third down and then connected for a 53-yard touchdown reception. The Irish then used a 13-play drive that extended into the early portion of the second quarter to boost their lead to 13-7.

Notre Dame led 23-13 at the half, but that point total might have been even higher if trips into the red zone hadn’t stalled out and resulted in the aforementioned field goals. The first of those drives started near midfield and got down to the Clemson two-yard-line, but the Irish were only able to add three points to their total.

On their subsequent drive, Notre Dame ate up six minutes of clock and got the ball to the Tigers’ nine-yard-line. Yet when that drive ended, Clemson was only down six and got three of those points back on their next drive, but fumbles on their next two drives resulted in a defensive touchdown and another field goal for the Irish. Near the end of the third quarter, Book’s fumble into the end zone wasted another opportunity.

For the second straight week, Clemson found themselves trailing by double-digits at halftime before coming back strong in the third quarter. They took the opening drive of the second half and used nine plays to set up a 46-yard field goal that chopped Notre Dame’s lead to 23-16. That was followed by a quick three-and-out for the Irish.

When Clemson got the ball back, they methodically used a 13-play, 6-yard drive to knot the score at 23 apiece. The tying score was set up by a fourth-down conversion at the Notre Dame 10. The Irish struggles in the third appeared to be over, but Book was stripped of the ball near the goal line, resulting in a touchback.

Trouble in the Air

Clemson went almost exclusively to the air against Notre Dame, with freshman quarterback D.J. Uiagalelei throwing for 439 yards and two touchdowns. The yardage allowed is a drastic change from the Irish’s 2020 pass defense average of 173.5 yards per game, while the two scoring tosses matches the output of those first six contests.

Three Tigers gave Notre Dame defenders particular fits on the night, accounting for 22 of the 29 Clemson receptions and 352 of the yards. Cornell Powell was the big-play man for the Tigers with six grabs for 161 yards and touchdowns. Meanwhile, Amari Rodgers and running back Travis Etienne, who each collected eight receptions in the game. Etienne is better known for his ground game, but he only managed 28 yards on 18 carries.

Notre Dame goes back on the road next Saturday and heads to Chestnut Hills, Mass. for the latest edition of the Holy War against the Boston College Eagles. The Irish will be seeking their eighth straight victory in the series and pick up their eighth win of the season, while the Eagles are seeking to improve on their 5-3 record. BC’s most recent victory came on Saturday in a 16-13 road win at Syracuse. The victory was important, but their performance was a mediocre effort that they can’t repeat if they want to spring the upset. 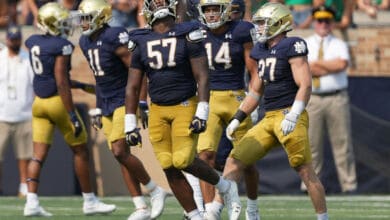 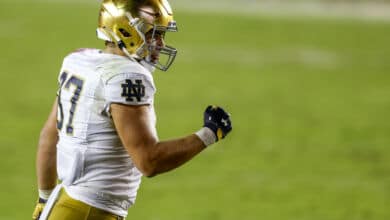 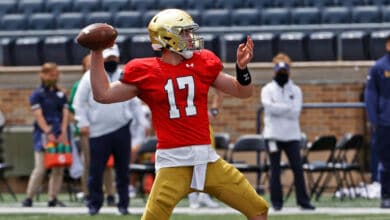