Notre Dame’s dream season came crashing back down to reality on Saturday. The previously undefeated Fighting Irish took one on the chin at the hands of Clemson in the ACC Championship Game. While the Tigers reminded the Irish who the current royalty in college football is, there were still a few positives – you just had to squint hard to see some of them.

Why Chris Tyree, one of Notre Dame’s fastest players, didn’t touch the ball until the fourth quarter when the outcome had long been decided, I don’t know. It’s a decision that Tommy Rees and Brian Kelly will have to try to wrap their heads around for a while. What I do know is when Tyree finally got the ball, he made a good thing happen.

Tyree only got one carry in the entire game. He took that one carry 21 yards into the endzone completely untouched. It seems like maybe someone with Tyree’s speed should have been utilized a little earlier when the offense struggled.

Tyree only got two carries in the last game against Clemson, one of which was a four-yard loss. That’s not enough of a body of work to keep the talented freshman on the sidelines for three and a half quarters, though.

If Notre Dame is going to have any chance of being competitive with Alabama in the Rose Bowl, Notre Dame has to get players like Tyree involved earlier.

The play of the Ademilola brothers

Notre Dame fans were down on the play of the defense as a whole on Saturday, but at the end of the day, the defense only gave up one more point to Clemson this time around than they did last time around. And this time, the Tigers had Trevor Lawrence. I get being disappointed that the defense couldn’t come up with big stops like they usually do (see Travis Etienne’s long touchdown run on 4th and 1 at the end of the first half. Still, the defense wasn’t the biggest issue by far for Notre Dame.

Two players, in particular, stood out to be on defense – Justin and Jayson Ademilola. The junior twins from New Jersey were active and disruptive when they got in the game. The stat sheet only shows three tackles combined for the brothers, but that doesn’t tell the story of how well they played.

Seeing the Ademilola brothers raise their level of play should be very encouraging to Notre Dame fans because both figures to start for the Irish in 2021. Jayson is a virtual lock at defensive tackle, and Justin isn’t far behind at strongside DE.

It seems shocking that Kyle Hamilton didn’t have a single interception in the regular season (one was stolen from him against Boston College), but it didn’t take long for Hamilton to get one in the ACC Championship Game. Hamilton’s pick of Trevor Lawrence on Clemson’s first drive was about the high point of optimism for Notre Dame fans on the day – that was five minutes into the game.

Hamilton would later leave the game with an ankle injury that Brian Kelly later described as nagging but not something that will keep him off the field against Alabama.

It’s been an up and down year for Hamilton after bursting on to the scene in 2019. The massive breakout we all expected didn’t quite happen. We’ll see if Hamilton can make another big play or two in the playoffs.

The punting of Jay Bramblett

Almost any time the punter makes the “5 Things I Liked” column that tells you all you need to know about the outcome of the game. Unfortunately, Bramblett was a busy man in Charlotte, kicking six times for a 48.2 yards per punt average and a net average of 47.8. Four of Bramblett’s six punts landed inside the Clemson 20 yard line, and he had two punts of 50+ yards – the longest of which traveled 59 yards.

It was Bramblett’s most effective outing of the season. On the year, Bramblett averaged just 42.5 yards per punt (including his stats from Saturday). His 59-yarder was also the longest of the season, and before Saturday, he had only pinned opponents inside their 20-yard line seven times in 33 attempts.

Make no mistake; it was a great day at the office for Jay Bramblett. Any time your punter is one of your best players, though, you probably got blown out, similar to how Notre Dame did on Saturday.

Jonathan Doerer’s 51-yard field goal, an ACCCG record, would have made this list if his next kick, a 24-yarder wouldn’t have bounced off the upright.

While Saturday was maddeningly frustrating to everyone, Notre Dame is still in the playoffs. It might not feel that great this time around since it’s on the heels of a blowout that casts a whole lot of doubt about Notre Dame’s chances, but it’s the playoffs nonetheless. Plenty of other programs would love to be in the fourth position trying to figure out how to slow down a juggernaut like Alabama.

Take a look at Notre Dame’s two oldest rivals – USC and Michigan. The two storied programs have combined for zero trips to the College Football Playoff since their inception. Notre Dame is preparing itself for its second, even if this trip is likely to be as short-lived as the last.

We’ll have the entire off-season to debate how Brian Kelly can get Notre Dame over the hump – or if he ever will – but not many people expected Notre Dame to be one of the final four teams this year, and they are. If you are upset about that, well, then I can’t do anything for you. We get two more weeks in a screwed-up year to dare to dream that maybe, just maybe, the impossible happens. After all that’s happened in 2020, I can think of a lot of worse ways to ring in the new year. 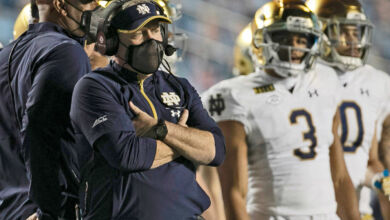